This portrait of the composer George Frederick Handel, painted after he had turned blind, has been on almost continuous display since its purchase in 1968. It was first offered to the Gallery at a price of £10,000. Despite this prohibitively high price tag, the acquisition was considered a priority because of Handel’s standing as a national figurehead in the history of British music. The new director Roy Strong made the unprecedented decision to the mount the Gallery’s first public appeal to secure the portrait for the nation. 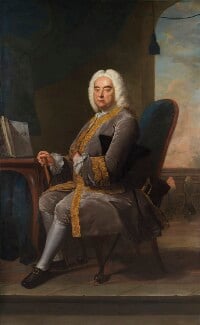 The appeal culminated with a special performance of one of Handel’s best-known works, the Messiah at the Royal Albert Hall. [1] This featured the internationally renowned classical singer Joan Sutherland and conductor Richard Boynynge, and was attended by the Queen’s cousin Princess Alexandra, who later wrote to the Gallery apologising for her late arrival due to congested traffic [2]. The portrait was acquired with the proceeds for £9,450.

Despite this success, there were some outspoken objections to the appeal itself: What’s On In London acerbically recalled how in 1742 Handel had devoted the proceeds of the first performance of the Messiah to charitable causes, and noted the appalling conditions in which young offenders were being kept in 1968 [3]. However, an anonymous donation and the enthusiastic support of the Arts Minister, enabled the Gallery to host an event for 400 children from Outer London Boroughs, thereby honouring Handel’s original charitable endeavours.