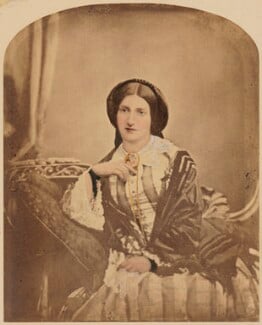 On the 3rd of February 1932 Henry Hake, then Director of the National Portrait Gallery, was interested to read an article about Isabella Beeton in the The Times.  It aimed to dispel the popular idea that the author of Mrs Beeton’s Book of Household Management, who had died in 1865, was ‘stout, stern and frumpy’.  Indeed, the author wrote, the portraits of Beeton owned by her children revealed her to have been ‘a beautiful young woman with a face that indicates her keen intelligence’.

Intrigued, Hake wrote to the newspaper explaining that the Gallery was keen to acquire a portrait of Beeton and asking to be put in touch with the author of the article.  This, it transpired, was Beeton’s son Sir Mayson Beeton.  Barrington Ward, assistant editor of The Times explained that ‘he has... portraits of her in his possession.  I think there would be widespread approval if your Trustees thought fit to add Mrs Beeton to their collection.’  Sir Mayson was contacted and proved keen to co-operate.  However, Hake was sorely disappointed on meeting him, as he revealed that the portrait of his mother was a photograph, not the oil painting that Hake had been expecting.

Hake reported the misunderstanding to Barrington, whose reply is reveals the contemporary debates about photography as an art form: ‘I am sorry that you were unable to track down a real portrait of Mrs Beeton.  I, too, was misled by the word.  It will be something, anyhow, to have a photograph.’  It was decided that the portrait should be acquired, with Hake suggesting that ‘although a photograph, we ought to give it a register number’.  This was P3, reflecting its status as one of the first photographs to enter the Gallery’s collection.

Today, the Gallery regularly acquires photographic portraits for both its Primary and Photographs collections. These now include over 250,000 original photographic images.