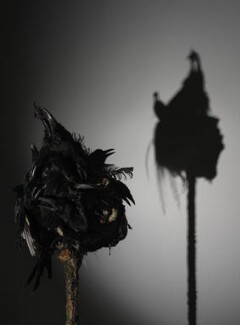 The acquisition of this unusual portrait of Isabella Blow posed unprecedented questions for the Gallery surrounding display and longevity. The portrait is a combination of sculpture, installation and light projection and presents a silhouette of Blow's head, created by a simple spotlight shone on an apparently amorphous ball of objects.  It includes fifteen taxidermy animals, including birds, a rat and a snake, in addition to the sitter’s trademark lipstick and one of her own Manolo Blahnik shoes.  In making the portrait, the artists were fascinated by what they saw as Blow's gothic, medieval quality and chose to depict her as though on a stake, using ravens and the particular species of rat that is connected with the Black Death. When initially considering the work for acquisition, Gallery curators recognised that it was a fascinating depiction of the sitter in a highly original form. However, given the inevitable consideration of the long-term care that such a complex piece would involve, it was not a straightforward question for the Gallery.

The Gallery needed to know technical details about the creation of the work, such as which preservatives had been used for treating the animals, in order to ensure that no toxic chemicals had been applied. It was also important for the Gallery to know whether elements of the work that are crucial to the silhouette could be replaced or fixed back on if they were to fall off. Other considerations included what the best storage for the work was, how regularly condition checking should take place, how the work should be dusted and how pest infestation could be prevented.

The curators consulted conservators at the Natural History Museum who specialise in taxidermy animals as well as an independent taxidermist, and a number of recommendations were made and a set of guidelines for display and maintenance were created. This enabled the Gallery to proceed with the acquisition with a plan for the future care of the work in order to ensure its long-term preservation. When the work was acquired the silhouette of the object was traced and diagrams of the head from different angles were made so that if an element ever does fall off it can be fixed back on in the correct position. The work is now stored and displayed in climate-controlled conditions and regularly checked for pests.