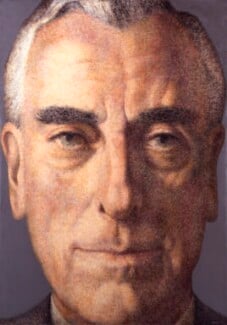 The 1968 purchase of this portrait marked a radical shift in the National Portrait Gallery’s acquisition policy.  Previously, the Gallery had only been able to accept portraits of sitters who had been dead for at least ten years, a policy intended to ensure that sitters’ contribution to British history and culture had been sufficiently assessed. However, in the late 1960s the Gallery’s director Roy Strong proposed a challenge to the established rules. He suggested that the Gallery should collect portraits of living people by prominent contemporary painters of living people “so that this Gallery in a hundred years time is not an accumulation of academic tatt.” [1]

Strong described John Ulbricht’s painting as a “rather riveting and strange object, very modern for this collection.” Conventional portraitists of the period aimed to flatter their sitters; in contrast, this painting seemed to be an attempt “to come to terms with the human face... a large scale detailed study of an individual physiognomy, reminiscent of a searching close-up on the cinema screen or, perhaps, of an area of a map, which has never been seen in such detail before”, in the words of the Gallery’s then-Chief Curator Robin Gibson.

Letters from the artist describing the portrait sittings survive in the Gallery’s records.  In these, Ulbricht describes his single meeting with Mountbatten and “the image of him which struck me so forcibly at the time: that of a face like the great vertical superstructure of a battleship”.