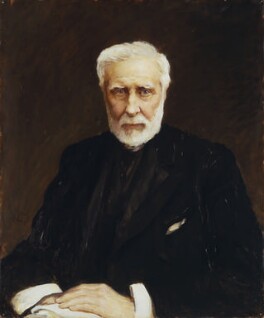 This portrait was an unusual addition to the National Portrait Gallery’s collection in 1901.  The painting, which was not made from the life but is a posthumous image, and which entered the collection less than ten years after the death of the sitter, broke two of the Gallery’s rules on acquisitions.  The Gallery agreed to waive these rules in response to a request from the Sir George Grey Memorial Committee.

During a long career as a colonial statesman, Grey had held the positions of Governor and Premier of New Zealand, Governor of South Australia and Governor of the Cape of Good Hope. After his death in 1898, according to Gallery correspondence received in early 1900, it was felt that some form of memorial was required to mark the ‘the imperial work he performed in these colonies’ and his legacy as ‘one of the most remarkable figures in the history of the building of Greater Britain’.  Accordingly an organising committee was set up and funds of £700 were raised by subscription. Contributors included the imperialist Cecil Rhodes, the three colonies where Grey had served as Governor, and the trade unionists of Sydney (The Times, 9 March 1902).

Once the Trustees had confirmed that they would accept the work, despite their 10-year rule, the commission for a posthumous portrait went ahead.  Alerted by newspaper reports of the commemorative plans, two lesser-known artists lobbied the Director for the opportunity to produce the work, one of whom, Sydney Hodges, claimed to be a specialist in the painting of posthumous portraits (11 March 1900). Ultimately, the commission was awarded to the eminent portraitist, Sir Hubert von Herkomer, and in due course, on 29 March 1901 the work was formally accepted by the Gallery Trustees.

In a final bizarre twist to the tale, on 12 January 1906 Herkomer directed his Private Secretary to write to the Gallery denying his authorship of the work.  A swift exchange of correspondence, including a letter from Walter Kennaway, the secretary to the Agent-General for New Zealand, corrected him on the matter, and shortly afterwards the artist sent an embarrassed admission to Kennaway acknowledging his mistake:

I am very sorry to have caused this trouble about the portrait of the late Sir George Grey. Referring to my books, I can understand my lapse of memory: it was a posthumous portrait, which left no impression of a personality upon my mind; this is my explanation and my excuse. The portrait is by me.