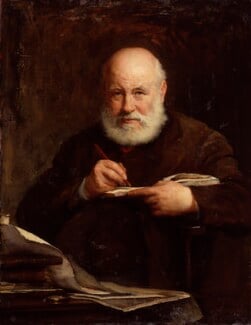 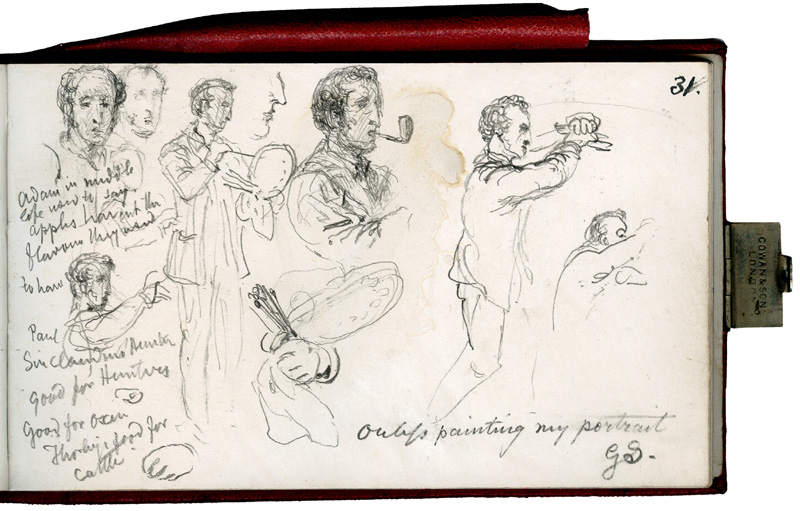 This portrait of the Gallery’s first Director Sir George Scharf was commissioned by a group of his friends and supporters in 1884.   It shows him in the act of sketching, with notebook open and pencil poised.  Over the course of his long career Scharf, a talented draughtsman, filled more than 150 sketchbooks with careful drawings of British historical portraits encountered in public and private collections around the country, as well as with daily incidents of Victorian life.  In fact, whilst providing an early sitting for the portraitist William Walter Ouless in January 1885, he made various sketches of the artist as the latter worked to capture Scharf’s own likeness [1].

116 personal friends and prominent public individuals donated towards the portrait.  These comprised members of the aristocracy, museum officials, artists, antiquaries, scholars and others.  The picture was formally presented to the NPG’s Board of Trustees in March 1886, in recognition of Scharf’s services to the Gallery and to portraiture research.  In accepting the donation, the Chairman of the Gallery’s Trustees Charles Stewart Hardinge acknowledged ‘the great value which the Institution has derived from Mr Scharf’s untiring labours, as well as the special & rare knowledge which he brings to bear on all questions connected with the History of Art in this Country’.

The portrait hung for many years in the Boardroom of the Gallery’s administration offices at 20 Great George Street, Westminster, but was not part of the Gallery’s collection. Following Scharf’s death in April 1895, the Trustees decided to waive the normal Ten-Year-Rule, which stated that the Gallery could not acquire portraits until ten years after the sitter’s death. In their meeting of 27 June 1895, it was agreed unanimously that: ‘the portrait of Sir George Scharf should now be incorporated in the general collection, as a mark of honour and respect to their deceased friend and colleague’.