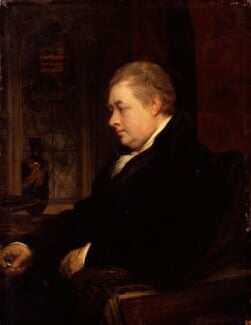 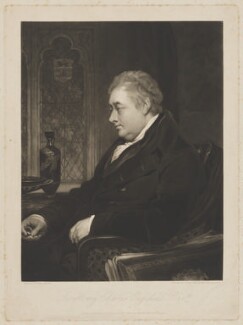 This portrait’s acquisition illustrates the fundamental importance of the Gallery’s Reference Collection, which consists mainly of prints, in researching and authenticating portraits.

It was unidentified and catalogued only as ‘Portrait of a gentleman’ when it appeared at auction 29 January 1969.  It was however signed and dated with Thomas Phillips’ monogram ‘TP 1815’.  A member of Gallery staff compared it with contemporary engraved copies of Phillip’s’ portraits in the Gallery’s Reference Collection and was able to identify it as Englefield by comparison with a mezzotint by Charles Turner published on 20 October 1821.

Details in the portrait confirmed Englefield’s identity.  These included the green stone specimen in his hand, a reference to his interest in geology, the Greek vase and bowl, both from his collection, and his family’s arms on the Gothic window.

Further proof was found in Phillips’ Sitters Book, a manuscript copy of which is held in the Gallery’s archive: ‘Dec 1815 Sr. H. Englefield Bt. 419 small’.

The portrait was found listed in the 1816 Royal Academy catalogue, but the Gallery had no further record of it until Coe’s sale.   It was purchased by the art dealers Leggatt Brothers on behalf of the Gallery for £50, and was subsequently gifted by Esmond Samuel de Beer.

Before the advent of photography, it was common practice for engraved copies to be made of portraits of celebrities, often with the sitter’s and artist’s names beneath the image.  The Gallery has collected prints since its founding and today the Reference Collection is an important resource for the study of portraiture.