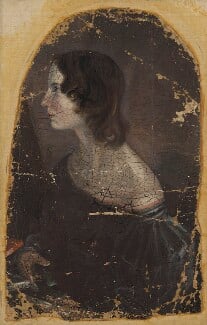 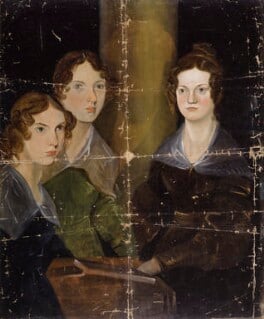 The front page of the popular Daily Graphic magazine of March 6 1914 bore the headline “The Romantic Discovery of Long Lost Brontë Portraits”. The accompanying illustration depicted visitors inspecting two damaged portraits of the Brontë sisters, hung for the first time at the National Portrait Gallery. [1] The rediscovery of the portraits, thought to be long lost, made for a compelling story and generated much public interest.  They had been found by Mrs M. A. Nicholls, the second wife of Charlotte Brontë’s widower, on top of a wardrobe at Hill House, Banagher in Ireland.  Both portraits were painted by Branwell Brontë, brother to Charlotte, Emily and Anne.  The larger group portrait had originally included a portrait of Branwell, but he later painted himself out.  This work, having been folded up for many years, was marked by a number of crease lines. The single portrait of Emily is the only surviving fragment of a larger group portrait that included the other sisters and Branwell, who was depicted holding a gun.  As Mrs Nicholls, the discoverer of the paintings, explained in a letter to the Gallery, her husband had ‘cut it out of a painting done by Branwell as he thought it good but the others were bad’.

It was unusual for the Gallery to acquire portraits in such a damaged state, and there was much debate about their quality.  Elizabeth Gaskell described the group portrait as ‘not much better than sign painting as to the manipulation but the likenesses were, I should think, admirable’. Writing for The Sphere, Clement Shorter expected that by the time of their display restoration would have fully remedied the “ill-treatment derived from over forty years of neglect”. [2] The Gallery concluded, however, that the damaged condition of the portraits was expressive in itself and merited preservation. At the first day of viewing visitors were so numerous that, in the words of the Yorkshire Observer, the Gallery “underwent a minor siege” and today both paintings are still some of the most popular works in the Gallery’s collections. 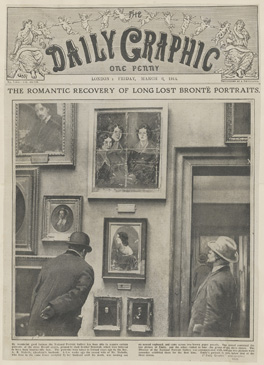 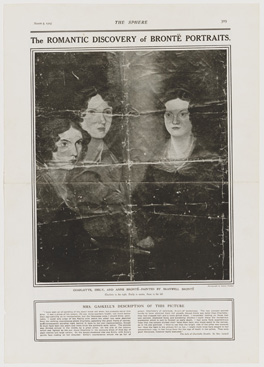