When the Gallery purchased this painting in 1908, very little was known of its history but it was thought to be the only portrait of Henry VII’s mother painted from life, in around 1475. The Gallery’s director, Lionel Cust made much of it as a rare and important example of early English portraiture. 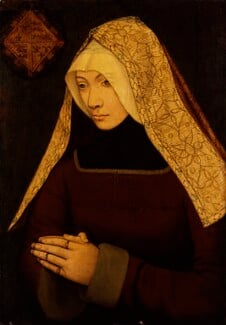 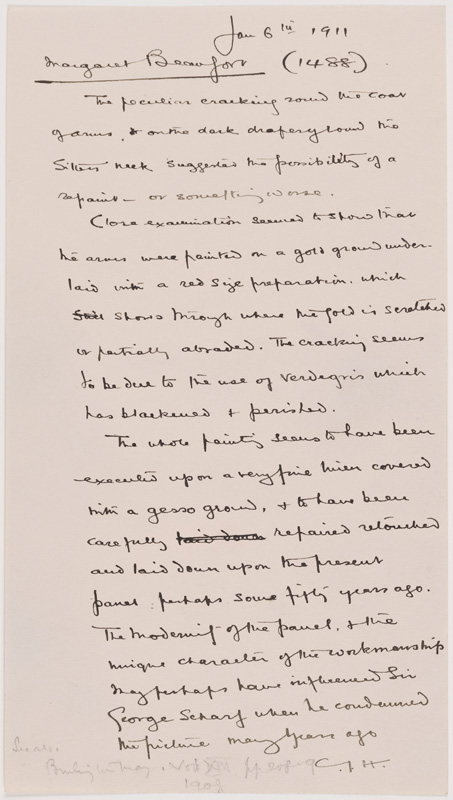 illustration 1 of the first paragraph of Holmes’ report: “The peculiar cracking round the coat of arms, & on the dark drapery round the Sitter’s neck suggested the possibility of a repaint – or something worse

The Gallery’s earliest record of the portrait dates from 1883 when it was purchased by Lord Powerscourt. He invited the first director, George Scharf to view it, but Scharf was not convinced of its authenticity. He sketched it on the back of Lord Powerscourt’s letter describing it as ‘A fabrication’.

Powerscourt promptly resold it at Christie’s, probably the lot titled ‘A lady, in nun’s dress’.  By the time it again appeared at auction in 1908 Scharf’s opinion was apparently lost sight of and it was purchased for the Gallery as a portrait of Lady Margaret Beaufort, Countess of Richmond and Derby.

Cust’s successor, Sir Charles Holmes, had his doubts however, and in January 1911 wrote a report on the portrait noting some peculiarities, for example that it was painted on a very fine linen laid down on a modern panel and that the coat of arms was a later addition. [1]

His suspicions were confirmed in 1939 when two x-ray photographs were taken.  These revealed that a portrait of an unknown young woman in the costume of circa 1510-50 was painted underneath, probably an early copy of a donor or donor’s wife from an early 16th century Flemish altarpiece; it had been painted over and a coat of arms added in order to sell it as a portrait of Henry VII’s mother.

What we see today is now known to be a 19th century painting.