The Watts Archive contains a treasure-trove of information, revealing many secrets about Victorian art practice. Among the letters are an extensive correspondence between Watts and the art manufacturers Winsor and Newton and their consulting chemist, J. Scott Taylor. 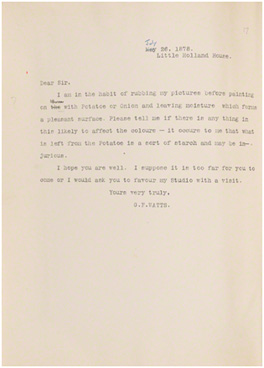 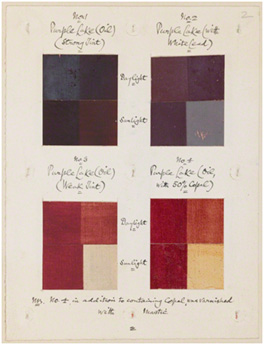 Winsor and Newton was founded in 1832 by William Winsor (1804-65), chemist and artist, and Henry Charles Newton (1805-82). In 1837 they acquired a varnish factory at King’s Cross and also took premises at Blackfriars for the grinding of oil colours. These facilities were replaced or extended in 1844 when they set up a steam power factory in Kentish Town, known as the North London Colour Works, which continued in use until 1938.

The correspondence between Watts and J. Scott Taylor, of the North London Colour Works, reveals many of the mysteries behind Watts’s art practice. In their letters they discuss at length Watts’s unusual approach and Taylor’s love of art and science. They explore chemistry; colour theory; the trialling of colours; use of oil; colour grinding; brush stiffness; evaporation rates, and much, much more. 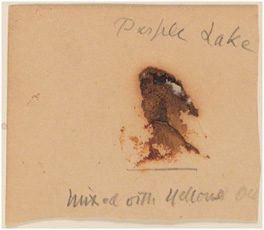