Father of the Gallery

On 9th March 1857 George Scharf was appointed Secretary of the newly established National Portrait Gallery. At that time Scharf was nearly 37 years old and acting as an 'Art Secretary' to the Art Treasures Exhibition in Manchester.   His salary, ‘understanding that he shall give undivided attention to the duties of the office’, was established at £300 a year, about £13,000 in today’s money.

His responsibilities were to attend Trustees' meetings, safeguard the pictures, gather notes and information on portraits, inspect and sketch portraits for acquisition, and catalogue the Collection. When the Gallery first opened to the public in 1859 it was situated at 29 Great George Street, Westminster. The building had originally been a private house.  For the first eleven years Scharf lived alongside the portraits with his mother and aunt.

Scharf was a meticulous researcher of portraits and portraiture. He developed methods for authenticating portraits which are still used today. He worked tirelessly to build the Collection.  He was also responsible for display, care and cataloguing of the portraits. In modern terms we could say that Scharf undertook single handedly the role of Visitor Services Assistant; Building Officer; Curator; Accountant; Librarian and Researcher. When he retired he had secured 982 portraits for the nation.

He campaigned vigorously for a purpose built premises in which to house the Collection. In the meantime he supervised its move to two more temporary and unsuitable locations. He was finally rewarded for his efforts in 1889 when the money for a new building was donated by W.M. Alexander. In 1895 Scharf was forced to retire due to ill-health. Despite being confined to a wheelchair he insisted on visiting the site. Tragically, Scharf died before the building was completed. It was opened to the public on the present site in 1896. 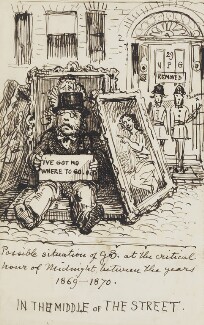