When George Scharf was born in 1820, London was on the cusp of a period of expansion and change greater than experienced ever before or since.  The old London of narrow streets and dusty shops was being replaced with the new buildings, squares and streets that have become today’s landmarks.

Sir George Scharf’s papers capture the changing face of London.  His sketchbooks and diaries depict the construction of the new Houses of Parliament; the introduction of the railways and early experiments with telephones.   He recorded the construction of some of London’s most iconic buildings, including the Natural History Museum, the V&A, and ‘Big Ben’.  He participated and recorded his involvement in great events of the era including the Chartist Rallies of 1848, the Great Exhibition in 1851, the funeral of Prince Albert in 1861, Queen Victoria’s Golden Jubilee in 1887 and the beginning of the Labour movement in Britain in 1890.

In 1892 a journalist for The World magazine observed during his visit to Scharf’s house at 8 Ashley Place:

‘Sitting in his favourite elbow-chair, Mr. Scharf, as he turns over the pages of his memory for the benefit of his interested listener, makes you lament the poverty of your record of so much that is important and interesting.’ 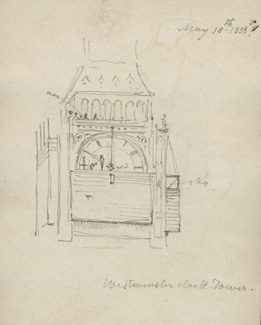 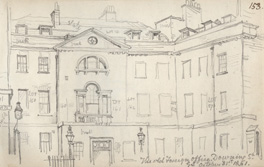