George Scharf never married. He lived, for part of his adult life, with his father, mother and aunt at 29 George Street. Their papers are also part of the Scharf Archive at the National Portrait Gallery. When his family members died he lived alone at 8 Ashley Place. Scharf, however, did not lead a lonely life. On the contrary, his personal diaries and correspondence show that he had an extremely full social life.

Scharf had a wide circle of friends. In his diaries he always noted their birthdays and as the time passed, the birthdays of their wives and children. The diaries also reveal that it was quite rare for Scharf to spend the evening on his own: there was always someone paying a visit. He regularly organized “Symposia’’ – dinners full of merry chat, piano playing, eating and drinking.  The menus and seating arrangements of these events were meticulously detailed in his diaries. As he recalled in an article for The World, for some time there was a ‘…spirited and prolonged contest between bottles and books…’ on his library shelves…’but the books won in the end and have held the fort ever since…’

Scharf was also acquainted with some of the rich and powerful of the Victorian era.  He was a frequent guest at such celebrated aristocratic country houses as Blenheim, Knowsley, Knole, Chevening, Madresfield and South Park. Staying as a friend of the family, Scharf was able to observe and capture life in these great residences in intimate detail. His papers record grand families playing cards, practising in the gym or cuddling during a boat ride or a picnic instead of striking stiff and serious poses for a photograph or an official portrait.  He even sketched the baby Winston Churchill at Blenheim.

Scharf was known both to Queen Victoria and Prince Albert. He dined with the Prime Minister, Gladstone and some of the most famous artists of his times.  He rubbed shoulders with other influential and well known individuals in London clubs such as the Atheneum and Albermarle. He attended and vividly described Royal Academy Anniversary Dinners.  Preserved amongst his papers are sketches of some of the participants, dinner table lists, layouts, menus and song programmes. 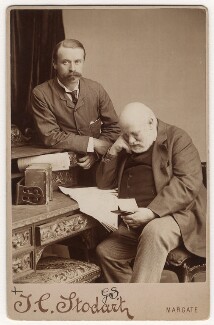