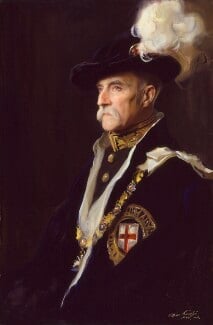 Former governor-general of Canada (1883-8) and viceroy of India (1888-94, Lansdowne's political career brought him appointments as War Secretary and, subsequently, Foreign Secretary.  Lansdowne commissioned a portrait from de László in 1920.  The result, a full-face portrait, was more ambitious than originally envisaged, and on receiving it at Lansdowne House in Berkeley Square, he was prompted to write the first letter below to invite the artist to increase his fee.  The second letter confirms that a payment of £210 was agreed for the painting.  The NPG portrait, showing Lansdowne in his Garter robes, was painted at much the same time as the original commission at the request of de László. 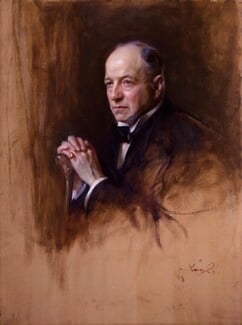 An important figure in politics and education, Haldane supported the enfranchisement of women by co-sponsoring an annual bill which kept the question before the Commons and was actively involved in promoting education and the foundation of the London School of Economics.  This portrait, painted shortly before the sitter's death in 1928, was exhibited at the French Gallery and purchased by the National Portrait Gallery for £150 in 1929.  Its acquisition delighted the artist and, after the posthumous publication of the sitter's autobiography, attracted wider interest, as the following letters testify. 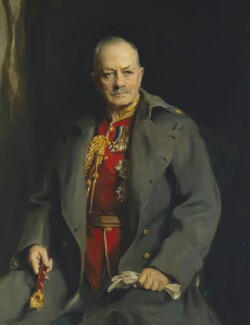 After a successful career in the army, Byng was appointed governor-general of Canada (1921-6) and chief commissioner of the Metropolitan Police (1928-31), where he made fundamental and widespread reforms.  Byng was first painted by de László in 1908 and sat for him again in December 1932.  He was Colonel of the 10th Hussars when this portrait was painted and the finished work was exhibited at Knoedler & Company, London, in 1933.  A contemporary copy executed by Sydney Percy Kendrick, favourite copyist of de László, and mentioned in the second letter below, now hangs in the Cavalry and Guards Club, London. 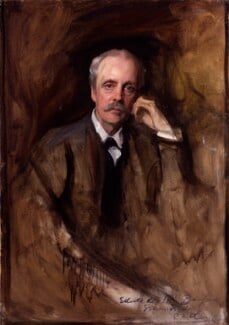 One of the pivotal figures in British politics from the 1880s to the late 1920s, Balfour was painted several times by de László.  He sat for the artist in June 1908, when the Gallery's oil study and a more formal portrait were produced.  Balfour was painted again by de László in 1914 and acted as co-sponsor when the artist applied for English citizenship.  Balfour's youngest sister Alice, with whom he shared the family home, Whittingehame House in East Lothian, ran his household and seems to have conducted most of the correspondence with de László on her brother's behalf. 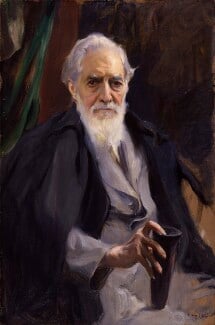 Sir Flinders Petrie was painted by de László in 1934, the year after he retired from his position as the first professor of Egyptology at London University.   De László produced several portraits of the great archaeologist, one of which, showing Petrie holding a black and red Badarian vase c. 5000 BC found by him at Naqada in 1895, was left by the artist to the National Portrait Gallery.  Another painting, a three quarter length portrait, painted for University College London, was unveiled in November 1934 and exhibited the following year at the Paris Salon. 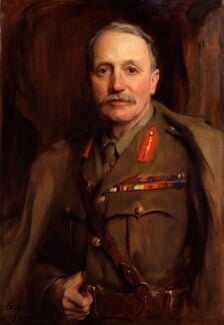 Pulteney pursued a career in the army, where he gained the nickname Putty.  He served with the Scots Guards in the South African War and commanded the 3rd corps of the British Expeditionary Force during the First World War.  In 1917, the year in which de László painted his portrait, Pulteney was made KCMG and married Jessie Alexandra Arnott.  Painted before his marriage, the portrait was paid for by the sitter's sister Miss Isabel Pulteney, as indicated in the first of the letters below. 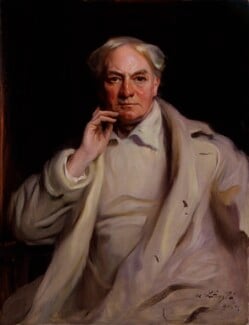 Born in Walsall, Jerome is best remembered for his book Three Men in a Boat, 1889, which has remained a popular classic.  He was painted by de László in 1921 and in addition to the finished portrait, in the National Portrait Gallery, the artist produced an oil study showing the sitter in a different pose.  A copy of the finished portrait was commissioned from John Henry Amschewitz by the Jerome Commemoration Committee for presentation to the town of Walsall.  £60 was raised to pay for the copy and the honorary secretary of the committee, Alfred Moss, wrote, in vain, to invite de László to unveil the portrait in 1931.

Jerome wrote that the artist Solomon J. Solomon complained while painting his portrait that the novelist had too many faces: "At one moment I looked a murderer, and the next a saint, according to him".  Jerome went on to record that "De Laszlo had the same trouble with me not long ago, but got over it by luring me to talk about myself.  In his portrait
there is a touch of the enthusiast." From Jerome K. Jerome's memoirs:
My life and times, an autobiography (Hodder & Stoughton, London, 1983) p. 95. 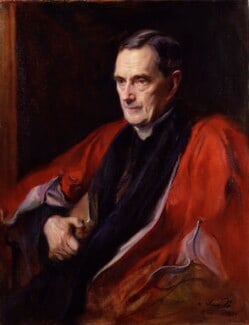 Dean Inge, known as ‘The Gloomy Dean' because of his weekly Evening Standard articles (1921-46) which often criticised over-optimistic popular opinion, was invited to sit by de László.  The portrait, completed in 1934, was given by the artist to Inge's wife, Mary Catharine (Kitty) Spooner, as explained in the letter below from Inge to Henry Hake, Director of the National Portrait Gallery.  Inge served as a Trustee of the National Portrait Gallery from 1926 to 1951 and his wish was that the portrait should eventually be given to the Gallery.

H.H. Asquith who was a friend of Inge's, described him in his memoirs as a ‘strange isolated figure, with all the culture in the world, and a curiously developed gift of expression, but with kinks and twists both intellectual and temperamental' (H.H. Asquith, Memoirs and reflections, 1852-1927, ed. A. Mackintosh, 1928). 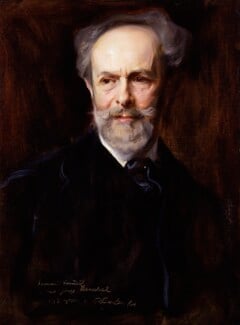 Settling in London in 1884, Henschel conducted the London symphony concerts (1886-97) and was a professor of singing at the Royal College of Music (1886-8).  He retired to Aviemore in the Scottish Highlands after the death of his first wife in 1901, but returned to the concert platform as a conductor and singer in 1909 and continued to perform until 1914, when he was knighted.  His correspondence with de László suggests the two men became friends after Henschel sat for his portrait in April 1917. Maffey sat for his portrait at the end of 1923, shortly before he stepped down as Chief Commissioner of the North-West Frontier Province, now the border between Pakistan and Afghanistan.  De László made two preparatory drawings and this study-portrait as well as the formal portrait, painted in 1924, which was given to the sitter's old college Christ Church, Oxford in 1974.  A copy of the portrait was painted by Frederick Cullen for Government House, Peshawar in 1924-5, as is explained in the following two letters from the copyist Frederick Cullen.

The National Portrait Gallery fully respects the rights of copyright holders.  Every effort has been made to obtain permission to reproduce copyright material and to ensure credits are correct.  At times, despite our very best efforts, this may not be possible.  We act in good faith at all times, and apologise for any inadvertent omissions or errors.  Any queries relating to copyright in this content should be referred to our Copyright Officer for immediate attention.  Please also see the Gallery's Intellectual Property Rights Policy.