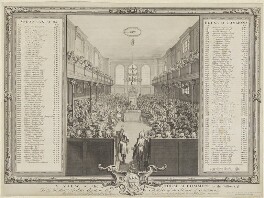 A View of the House of Commons (includes Robert Walpole, 1st Earl of Orford; Arthur Onslow and numerous other sitters)
by John Pine
published 1749
NPG D11092

Historically, for framing and display purposes, many prints were pasted down onto backings of paper, card or canvas, which have often proved harmful over time. These backings are now usually removed during conservation. 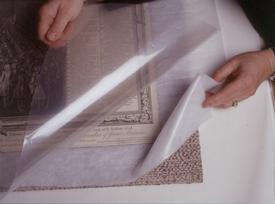 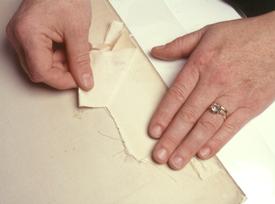 The pair of prints by John Pine (A View of the House of Peers is included in the section of Engravings and the National Portrait Gallery Archive) were once framed to be hung on the wall. They had been laid down onto a canvas backing with an intervening layer of fine paper. Before entering the Gallery's collection they had been removed from their frames and the excess canvas trimmed off unevenly, resulting in damage to the edges of the prints.

The most common method of removal is to humidify the print to soften both the backing and its adhesive. A controlled method of achieving this is to use capillary matting topped with a moisture-permeable membrane beneath the print. The matting transports water upwards, whilst the membrane allows only water vapour to reach the backing. The whole arrangement is topped with a layer of acetate to prevent excessive evaporation and thus create a humid environment for the print [4].

After a suitable period of humidification, the length of which depends on the materials, the backing can be removed from the print. The canvas backing was stripped from the John Pine prints manually [5], but additional treatment with a steam generator and the use of a palette knife was necessary to remove the paper layer [6].

Richard Cooper's etching of The Procession of the Knights of the Most Noble Order of the Garter is an image made up of two separate sheets. These two sections were pasted onto a backing of stiff strawboard, a highly acidic coarse cardboard. It was undesirable to use a wet process to remove this backing as it may have allowed further discolouration to move from the board to the print. The strawboard had to be laboriously removed, whilst dry, using a palette knife [7]. It is most important for this process to be carried out gradually, to avoid endangering the work. 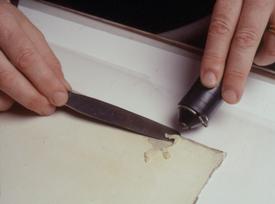 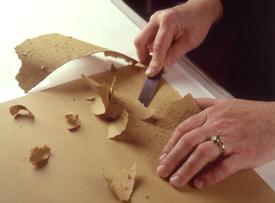