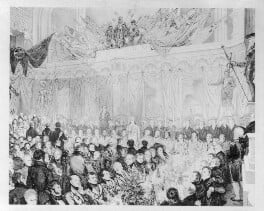 Paper may become acidic and discoloured for a number of reasons: it may absorb industrial pollutants such as sulphur dioxide and hydrogen sulphide; if it or its backing contains lignin (a constituent of wood), this may react with atmospheric oxygen to produce complex acids; and acidity may arise from the sizes used in some paper's manufacture, or from unsuitable pastes used in mounting or repair.

Washing prints serves two main purposes:
it removes the soluble acidic compounds described above and it strengthens the paper by, it is thought, reviving the fibrils which form the bonds between its constituent cellulose fibres. 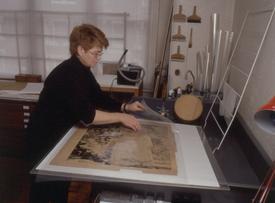 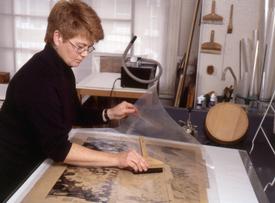 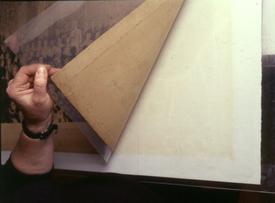 In the past, works on paper were often washed by total immersion, but this had risks, especially for prints on poor quality paper which may have been greatly weakened by oxidation. Now it is more common to wash prints by placing them in contact with sheets of wet blotting paper or capillary matting. This allows the acid and dirt to leach out of the paper whilst keeping it supported at all times.

To prepare a print for washing it is first humidified, then placed printed side down onto a sheet of acetate and lightly moistened with a spray. It is then carefully lowered onto a sheet of wet blotting paper or capillary matting [8]. A brush is used to remove any air pockets [9] so that all areas of the print are in even contact with the blotting paper.

After a few minutes the print can be lifted, supported by the acetate, revealing the discolouration left behind on the blotting paper [10]. This may need to be repeated three or four times as necessary, using clean blotting paper or rinsing the matting each time.

Although pure water is usually used, ammonia is sometimes added to increase its cleaning ability by making it alkaline, or if the paper resists 'wetting', detergent can be added. After washing with water, attempts can be made to remove grease and other stains by the use of an appropriate solvent, but some remain impervious to such treatment (as in The Royal Procession of Queen Elizabeth, featured in the section on Repairing and Lining).

After washing, the print is left to dry on a paper support: any discolouration appearing on the supporting paper indicates that further treatment is needed.