Frederick, Prince of Wales and his sisters (The Music Party)

By Philip Mercier
oil on canvas, 1733

Frederick Prince of Wales (1707–51) (see image NPG2501) was the son of King George II. Growing up at the German court in Hanover, he spent fourteen years separated from his family who had moved to London in 1714 upon the accession of King George I.

In 1728, George II finally summoned Frederick to London. From a young age, the prince had been a keen musician and continued to learn his favourite instrument, the violoncello, in London. Frederick’s enthusiastic manner of playing became much to the distaste of his former confidant Lord Hervey who thought it unsuitable for a prince and he branded Frederick ‘a buffoon fiddler’.

In 1733, Frederick’s Principal Painter, Philippe Mercier (1691-1790) painted a group portrait of the prince and his three eldest sisters playing music in the garden at Kew on the outskirts of London. Frederick is shown centre-stage with his violoncello, displaying his newly acquired musical talent. Anne, Princess Royal sits to Frederick’s left playing the harpsichord, Princess Caroline plucks the mandora (a form of lute) and Princess Amelia adopts a listening pose while pausing from reading her book of Milton’s poems.

Yet all is not at it appears. During the production of the portrait, the royal family were involved in a feud over Frederick’s concerted efforts to assert his independence from them and his Germanic roots. His assertions were exacerbated by his controversial patronage of the Opera of the Nobility (1733–37), a rival opera company to the Royal Academy of Music (1719–34), established by the German composer George Frideric Handel (1685–1759) and which was officially patronised by the Crown. The king and other members of the royal family thus interpreted Frederick’s rival patronage as a threat and a family feud soon developed. Tensions between the figures can be detected in Mercier’s portrait which alludes to this musical quarrel: for example, no participant acknowledges the others and Frederick, absorbed in his own music, turns his back to Amelia, who, in turn, seems to elbow her brother away. 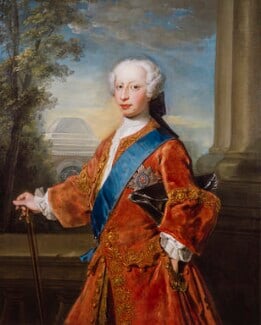 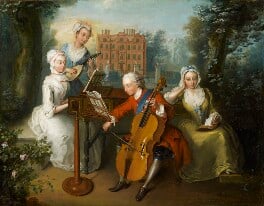 In preparation for the National Portrait Gallery’s exhibition ‘Rule, Britannia! Frederick Prince of Wales and Music in the 18th Century’ at Beningbrough Hall (1 March 2011 – 1 February 2012), the condition of Mercier’s portrait was re-assessed. One aspect that makes this painting so appealing is the refined brushwork and attention to detail that Mercier employed in this little painting, which measures only 451 mm by 578 mm. The strings of Frederick’s violoncello and the text visible on the open page of the book that Princess Amelia holds are, for example, intricately articulated while the different textures of both instruments and clothing are beautifully observed.

One of the main issues with The Music Party was the extent of discoloured resinous varnish, and ingrained remains of an older varnish layer in the recesses of the canvas texture and paint impasto. The degraded varnish was opaque in some places along the edges of the painting. As resin varnish ages, it darkens and often becomes yellow in colour. This had greatly obscured the intricate brushwork and the vibrancy of the painting's colour.  To reveal the gem-like quality of the painted surface, the brilliance of the colours and meticulously painted details, the degraded varnish, it was decided, should be removed.

In some areas of the composition, old restoration could be seen as dark patches. For example, the oil retouching, applied in a previous restoration campaign to the dress of Princess Amelia had become dark green, having changed from a yellow/grey colour.  Originally, this retouching would have probably been chosen as a match for the surrounding paint (see figure 3). Like oil paint, varnish can also darken over time.

The painting was examined in ultraviolet (UV) light and with magnifying optivisors, allowing the conservator to view the painting extremely closely. A stereomicroscope was used to inspect overpaint and varnish residues at a magnification of up to 45 times.  In UV light, otherwise inconspicuous areas of non-original paint could be seen. Non-original oil paint appears darker (less fluorescent) than the aged varnish which fluoresces brightly in UV (see figure 4). 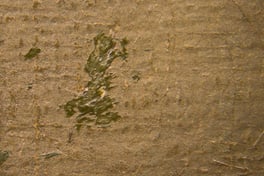 Figure 3: Microphotograph (x20) of overpaint applied over the original yellow/grey pigment in an earlier treatment. It had since darkened to a distracting dark green colour. 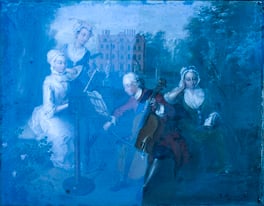 Figure 4: Photograph of painting in ultraviolet (UV) light, during removal of varnish. The aged varnish fluoresces in UV light, so the uncleaned half of the painting (left) appears brighter than the cleaned right hand side. Aged overpaint applied in an earlier treatment is visible as dark patches. 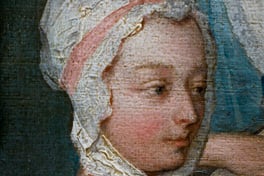 Figure 5: Before treatment: Detail of the face of Anne, Princess Royal which is obscured by residues of aged and yellowed varnish. Residual darkened varnish is visible trapped in the canvas weave, which gives the painting a speckled appearance. 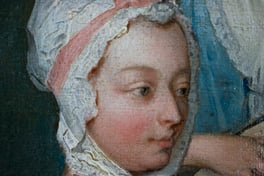 Figure 6: After varnish removal: Detail of the face of Anne, Princess Royal. The painting is no longer obscured by distracting darkened varnish and the original vibrant colours of the painting are revealed. 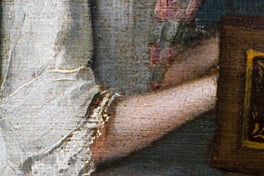 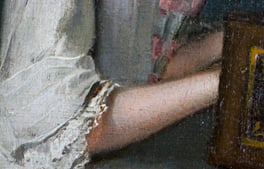 Two layers of retouching were uncovered during the conservation treatment.  Most recent retouchings were applied over the varnish and could be removed with the varnish.  The older, second layer of retouching had been applied before the painting was varnished and appeared to be oil paint.  On removal of the varnish, the older retouchings were clearly visible through the microscope as dark dabs of paint over small damages (such as that in Princess Amelia’s dress seen in figure 3).  Removal of this oil-based in-painting required a different approach from the varnish removal due to oil paint being less soluble.  The dark oil retouching was removed mechanically from the painting’s surface using a microscope, which magnified the area throughout this stage of the treatment.  Some old retouchings had  concealed significant areas of undamaged original paint.  Removing the retouching from the top left corner of the painting revealed previously obscured foliage, as seen in figures 9 and 10. 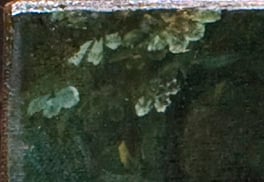 Figure 9: Before treatment: Detail of foliage in the top left corner of the painting, where it is obscured by degraded varnish and dark brown retouching. 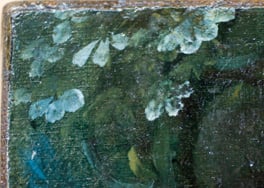 Figure 10: Detail of foliage after treatment. Original pale blue brushwork in the leaves have been revealed on removal of the varnish and retouching.

A modern clear varnish was then applied to the painting.  This will protect the surface of the painting from atmospheric pollutants, moisture and dust as well as saturating the colours and tones of the painting.  It also acts as a separation layer between the original painted surface and the conservator’s modern retouching.

Any remaining distracting marks and losses to the original paint were then retouched with a reversible modern acrylic resin medium mixed with dry pigments and colour matched to the surrounding paint (see figures 11 and 12). These retouchings were applied over the new varnish in order to reduce the appearance of the damages.  Finally, the painting was given a spray-varnish in order to give the painting an even surface gloss. 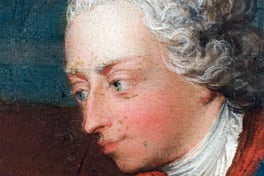 Figure 11: Detail of the face of Frederick, Prince of Wales before retouching. 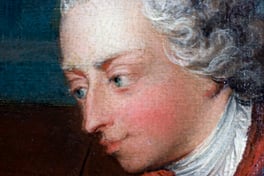 Figure 12: Detail of the face of Frederick, Prince of Wales after retouching.