'Henry and Katherine Reunited' – Conserving the portrait of Katherine of Aragon

During a research visit to Lambeth Palace in 2008 as part of the Making Art in Tudor Britain project, Gallery staff noticed an interesting portrait hanging on the wall of a private sitting room. Once it was taken off the wall it was immediately apparent that it was an early Tudor painting and, very unusually, it was in its original engaged frame. Although thought to be a portrait of Henry VIII’s sixth wife, Catherine Parr, the costume, which dates to the 1520s or 1530s, and the facial features matched far more closely with portraits of Henry’s first wife, Katherine of Aragon.

The painting has now been re-identified as Katherine of Aragon and is on long-term loan to the Gallery from Lambeth Palace following an extensive period of research and conservation treatment. 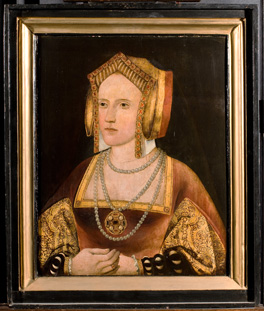 Fig. 1: Katherine of Aragon, by an Unknown artist, oil on panel, circa 1520, L246. By permission of the Archbishop of Canterbury and the Church Commissioners. Photograph taken before treatment. 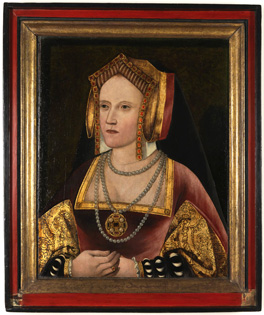 Preliminary examination of the painting in raking light revealed the impression of a design in the background, which was obscured by layers of overpaint and varnish (Fig. 3). A subsequent x-ray showed that these layers also covered up a veil attached to the sitter's headdress (Fig. 4). Before treatment began, paint sampling was used to investigate the layer structure of the original and non-original paint and varnish layers in the background. This helped to assess whether it would be possible to remove non-original overpaint and varnish. Cross-sections showed that the original background consists of an opaque green underlayer, over which lies a copper green translucent glaze. This original background was covered with two layers of overpaint, interspersed with layers of varnish. Crucially, the cross-section identified a resinous varnish layer separating the overpaint from the underlying green glazes, and the presence of this varnish layer helped enable the removal of the layers that covered the original green.

This treatment uncovered a green background with a pattern that imitates damask silk, with subtle modulations that create a sense of depth. There is a dark green border along the top and down the left edge, intended to represent the shadow cast by the window of the frame and on the right there is a large dark green shadow cast by the figure. Removal of the overpaints and varnish also revealed a veil that now stands out against the background, the soft folds of its bluish black fabric highlighted with pale grey. A pin, used the hold up the right flap of the headdress, was also uncovered.

The copper green glazes in the background are extensively discoloured in patches, where the green has changed to a reddish brown (Fig. 5). Such forms of discolouration are often seen in glazes containing copper, although it is not clear why some glazes discolour more than others. Apart from the composition of the glaze, extended exposure to light plays an important role. In this painting, a small area on the upper-right side was protected from light by an old, although non-original, filling material near the frame edge. Now uncovered, this area shows the original bright green colour which would have been seen throughout the background (Fig. 6). 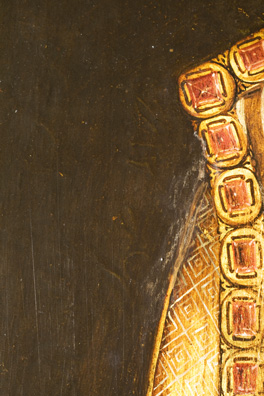 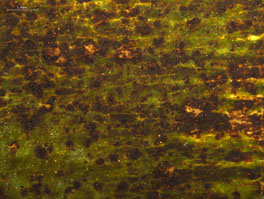 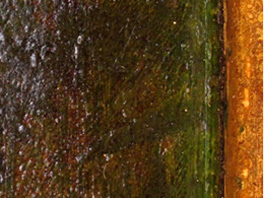 Fig. 6: Detail of the bright green at the edge, recovered from beneath an early fill.

As part of the examination, the painting was also viewed in ultra violet light (Fig. 7). The different types of fluorescence can indicate the nature of the materials seen on the surface. The dark areas indicate relatively recent retouching, and it was immediately clear that the face and chest had been heavily restored. The hands are in good condition, but the other areas of flesh were found to have suffered from extensive abrasions and paint and ground loss. At least two restoration campaigns were evident in the face, and even the most recent retouchings and varnish layers had become yellowed and discoloured over time (Fig. 8).The earlier restorations appear to have been executed in an oil paint and were frequently found to have extended over original paint. They had also darkened and become mismatched over time.Furthermore, the characterisation of the face had been altered during earlier restoration campaigns: the eyebrows were reinforced, additional dark glaze shadows had been added to further narrow and define the nose, bright white highlights had been added to the eyes, and the mouth was adjusted with a line of brown overpaint separating the lips. These repaints were easily discernable when examined under the microscope, as they covered cracks and original paint losses (Fig. 9). Fig. 7: Digital photograph taken in ultra violet light, showing overpaint in the face and chest, and an earlier cleaning test in the background. 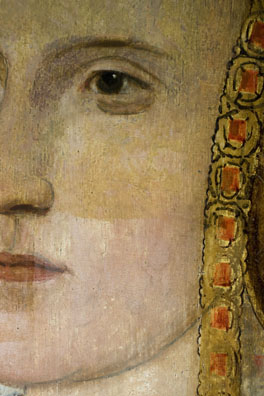 Fig. 8: Detail of the face taken during cleaning, showing the extent of the discolouration. Fig. 10: Detail of the face after the first stage of cleaning, showing discoloured patches of early restoration.

Fig. 11: Detail of the face after the second stage of cleaning, showing areas of loss down to the panel support.

Fig. 12: Detail of the face after final cleaning, with fills in the areas of loss.

Fig. 13: Detail of the face after treatment.

The decoration on the gilded sleeves of the costume was found to have been painted using pure azurite in an oil medium that has discoloured to brown; the blue of this azurite is now only visible where the surfaces have been abraded (Fig. 14). The red velvet of the dress was created by modelling an opaque pink underlayer of varying tones, and then applying translucent red glazes in different thicknesses. Black pigments were also added to the glaze in the darker shadows. A sample taken from the dark purple sleeves shows that these do not include black, but are made from a red lake and azurite, with white used for the lighter purple velvet highlights (Fig. 15). 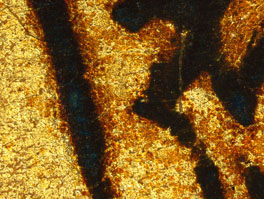 Fig. 14: Detail of the pattern on the sleeve after treatment, showing the blue of the azurite in areas
of abrasion. 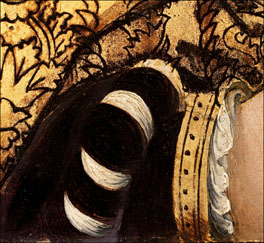 Fig. 15: Detail of the sleeve on the left, after treatment. The removal of the discoloured residues of brown varnish revealed the purple tone of the slashed sleeves.

The panel is held within its original engaged oak frame – a relatively rare survival from the early sixteenth century.

Two holes can be seen on the outer face of the top members of the frame, forming the original hanging system (Fig. 16). These had been drilled diagonally through to the reverse of the top member of the frame and would have been threaded with ribbon or leather in order to hang the painting.

Initially, the composition of the finish on the face of the frame was meticulously investigated in order to gain greater insight into the types of finishes that had been applied at various times, and to see if any of the original scheme remained and was retrievable. The most recent finish was composed of a crude ‘ebonised’ finish on the outer face and on the frieze section of the frame, whilst the moulded sight edge and sill sections had been covered in bronze paint and bronze wax (Fig. 17). This process of exploration and scientific analysis revealed significant evidence of original finish, which had been obscured by three previous restoration procedures. It was possible to conclude that the outer rim originally had a black painted finish, the moulded sight edge and sill section had an oil gilded scheme, the frieze section had a painted finish composed of a vermilion base and a red lake glaze, whilst the scoop section between the red frieze and the gilded sight edge had been painted with azurite. It appears that the red frieze section was stripped prior to the application of the eighteenth-century finish, possibly due to the degradation of the vermilion paint and further in-depth examination of the frieze section confirmed traces of the red finish. The oil gilding on the moulded sight edge was found to be predominantly intact – with the level of wear in keeping with a naturally aged gilded surface. It would appear that the sill had been stripped and re-gilded in preparation for the eighteenth-centuryrestoration scheme, but there were tiny remnants along the length of the immediate sight edge which confirmed that it also had the original gilding scheme.

Fig. 16: Detail photograph of the reverse of the portrait, showing the holes in the frame.

Fig. 17: Fragments of vermilion paint from the original scheme found beneath the later ‘ebonised’ finish.

Fig. 18: Detail photograph of the exposed area of original finish in the lower right-hand corner.

Dr Samuel Johnson by Sir Joshua Reynolds
Changing Impressions: A Print Conservation Project in Focus
The Conservation of Romney Paintings
Frederick, Prince of Wales and His Sisters (The Music Party)