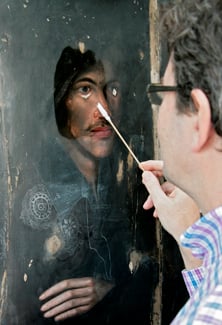 Finally, after lots of painstaking hard work the conservation of the portrait of John Donne is nearing completion. The complex process of removing at least three different layers of later restoration applied over several centuries has taken longer than we originally envisaged. Sadly, this type of work cannot be rushed. We also uncovered some old damages, but luckily none of these affected the costume or the face in a significant way.  We are now confident that the portrait presents a far better impression of its original appearance, which will give visitors an insight into what John Donne himself would have seen when the portrait hung on his own walls.

The image here shows the conservator at work on the picture. We expect this portrait to be back on the walls of the Tudor Gallery for a short period from mid June; however we hope it will also feature in the exhibition 'Shakespeare Staging the World' at the British Museum in July. 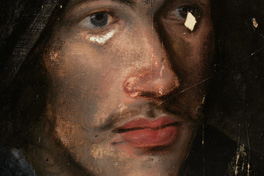 This detail shows the areas of the original grey shadow as well as areas of old losses, such as the one slightly below the eye on the right side.

Progress with the conservation work on the portrait of John Donne continues apace. And on my visit to see the picture last week, it was exciting to see lots of positive changes. The old yellowed varnish and areas of modern over paint or retouching has now been removed and much more of the original surface of the portrait can be seen. However, as a result, the picture inevitably looks a little battered. This is because oil paintings on wooden panels routinely suffer from losses over time due to the natural movement of the wood resulting from changes in humidity, accidental human damage, or as a result of over cleaning by previous owners or early restorers. Such losses are then covered over in a variety of different ways, often leaving a patchwork of original paint and old
restoration.

John Donne’s portrait was always a dark picture and it is described in his will as that ‘picture of myne w[hi]ch is taken in the shaddowes’. Donne evidently decided to pose for this portrait in the gloom of the evening light, perhaps as part of a dramatic gesture suitable to his melancholy state of mind at this time. Remarkably, what we can now see following cleaning, is how the artist built up the flesh tones and the shadowing of the face. It seems likely that the shadows were not a last minute addition by the painter, but were always part of the original scheme for this portrait. This is because parts of the flesh tones (such as the nose) were painted in a brighter, reddish colour which would appear more natural once the face was overlaid with grey shadowing. 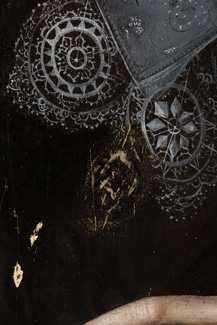 The good news is that much of the original paint remains in reasonably good condition and more of it has been uncovered since cleaning. The face and the lace of the costume are in reasonable condition and are competently painted as can be seen from the detail alongside. However as is often common with panel paintings there are significant losses along the panel joints and the black in the costume has also suffered from loss and wear. Along the vertical joints, especially on the left, several applications of white and ochre filling have now been revealed. This was applied in the distant past to compensate for irregularities in the surface caused when the panel was split and rejoined inaccurately. X-ray has revealed that some original painting is hidden by this filling.

One remarkable feature of the portrait which has proved to be original, is the vertical white brush stroke rising from John Donne’s chest (seen in the detail below). Exactly what this is meant to be is not clear, but it probably had a symbolic meaning. Whether we interpret this as John Donne’s rising spirit, or something more profane needs further consideration but it is an interesting feature for a man whose haunting poetry links spiritual and physical love. 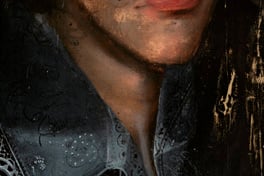 The expert paintings conservators working on this picture have an exciting and demanding task. We now know that the picture has endured many different campaigns of restoration to ‘improve’ various parts of the picture over a lifetime of more than four hundred years. The removal of the varnish and most of the recently painted additions has been a relatively easy task, but more work remains to both identify (and probably remove) other later additions. The job of working out what is original paint and what are additions can prove quite painstaking and the next phase of work will be done with the aid of a microscope. More on this over the next few weeks…..

John Donne and ‘his picture’

Last week one of the Gallery’s greatest acquisitions began a journey of transformation that is likely to last around six months. The remarkable portrait of the poet John Donne appearing from out of the shadows came off the Gallery wall to begin a detailed programme of conservation. Specialist painting conservators will soon begin to remove layers of varnish and dirt before starting further conservation work.

John Donne has been on the Gallery walls since his picture was purchased five years ago, and his absence has already been noticed. His brooding good looks, relaxed appearance, and jaunty moustache have meant that he has become a firm favourite of many visitors to the Tudor Gallery. In fact, the comment I most frequently hear about this picture is that he looks ‘modern’ compared to his pale faced aristocratic companions. The portrait dates from around 1595 and is one of the earliest portraits of an Elizabethan poet.

It was well-known before it was purchased by the Gallery. In the 1960s and 1970s it was reproduced on the front cover of many volumes of English poetry. As a result, Donne became the poster boy of the English Renaissance and generations of school children and undergraduates grew up looking at his wistful expression and love'lorn demeanour. 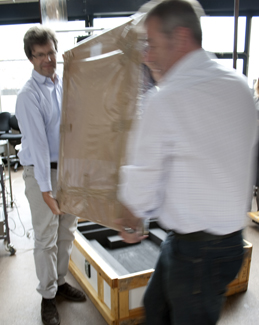 The painting being moved from its crate to be unpacked

The acquisition of this iconic picture in 2006 was supported by the National Heritage Memorial Fund, the Art Fund, several private donors, and rather heart-warmingly, many members of the public who sent in personal contributions, both small and large. However, in the period of over four hundred years since this extraordinary painting was made, it has suffered from damage and later additions to the surface. With help from many new supporters we can now explore what can be done to help return this picture to somewhere near its original appearance. The conservation work will be extremely detailed and time consuming and we are still seeking the final sum of money needed to complete the work.

In the months to come this page will provide updates and explore some of the problems the conservators will face in mapping the paint surface, identifying later additions and completing cleaning.

John Donne was fascinated by portraiture and sat for his likeness on numerous occasions. In fact, several of his poems such as ‘His picture’ and ‘Witchcraft by a picture’ explore the power of visual imagery (both imagined and designed) to touch the heart and linger in the memory. I suspect Donne would have been delighted that hundreds of years after his death, his portrait has become so well known, and that it will soon be the subject of even greater care and attention.

The front cover of the Penguin Classics John Donne: The Complete English Poems, first published in 1975