Chasing the suffragettes: A Boadicea of Politics 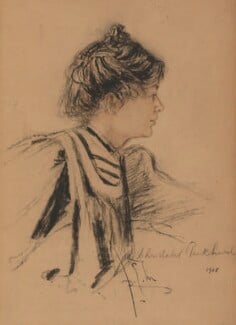 One of the latest acquisitions for the Collection is a drawing of the leading suffragette, Dame Christabel Pankhurst (1880-1958). It is by the Canadian artist, Richard George Mathews (1870-1955), who settled in London in 1907, making drawings of celebrities for leading London illustrated magazines, The Graphic and The Bystander. It joins a small group of works by this artist purchased by the Gallery in 2005.

The Gallery’s collection of portraits of suffragettes is uneven, with some good photographs and a fine late painting of Christabel's mother, Emmeline Pankhurst, by Georgina Brackenbury, on display in Room 30. So we were excited when this drawing came up in a dealer's catalogue. We had questions over the identity: was it really Christabel, when the inscription was in a different hand to the artist's monogram? And who was the artist, given in the catalogue by his initials only?

The drawing was going on show in a "first come, first served" selling exhibition and we had little time to sort this out. In a fast moving team process, collections manager Tim Moreton identified the artist, curators Peter Funnell and Paul Moorhouse inspected the drawing and highlighted the likelihood that it was an illustration for a periodical, chief curator Jacob Simon located this portrait of Christabel Pankhurst as a frontispiece in The Bystander and designer Ian Gardner worked overtime to queue on a Saturday morning in January for three hours to secure the drawing for the Gallery.

"A Boadicea of Politics" is the frontispiece's title in the issue of The Bystander for 1 April 1908. The caption tells us that the drawing was made by "the well-known Canadian impressionist artist, Mr R.G. Matthews, at a fifteen-minute sitting granted to him by Miss Pankhurst while she was in the throes of preparing for her great meeting at Sheffield". The text goes on to describe her as "the shining light of the Woman Suffrage movement", who was "popular even with her bitterest opponents, and irretrievably pretty, in spite of an undeniably active mind and brain. Orator, organiser, logician and 'martyr,' Miss Christabel chiefly fascinates by a clever combination in one small body of all the wiles of woman with some of the mind of man".

Nowadays, we look at her and the drawing very differently. It was drawn at a vital moment in the history of the Suffrage movement. Christabel Pankhurst helped propel the newly formed Women's Social and Political Union forward, accepting imprisonment for her cause when necessary and playing a leading part in planning spectacular events that attracted widespread publicity for the Votes for Women movement. She used the knowledge she had gained in obtaining a first class honours law degree to act as lawyer for herself, her mother Emmeline, and Flora Drummond, when charged with conduct likely to provoke a breach of the peace in October 1908, obtaining huge publicity when she subpoenaed two Cabinet ministers, Herbert Gladstone and Lloyd George.

The drawing was on display in Room 29 from 10 May until 11 December 2011, together with other images of Christabel Pankhurst. It has been acquired from Abbott & Holder Ltd for £1250 from their selling exhibition, Heads.