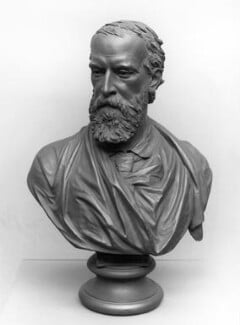 Victorian plaster sculpture still remains an unfashionable and little researched subject. Recent research sheds light on the production process for Mary Grant’s plaster bust of the Irish politician, Charles Stewart Parnell, created in 1892, the year after his death. The bust is on display in room 21 at the National Portrait Gallery. Mary Grant (1831-1908), one of the few women working professionally as a sculptor in Victorian England, was a niece of Sir Francis Grant, portrait painter, President of the Royal Academy and Trustee of the National Portrait Gallery. The Irish patriot, politician and landowner, Charles Stewart Parnell (1846-91), was leader of the Irish party in the House of Commons, and a passionate advocate of Irish home rule.

Many sculptors employed professional plaster workers, sometimes called sculptors’ moulders, to undertake specialist work in the sculpture production process. Mary Grant was no exception and used Fernando Meacci (c.1836-1893), an Italian-born piece moulder and figure maker, for the last five years of his life. Meacci lived in Cale Street, Chelsea, not far from Mary Grant’s studio in Tite Street, a fashionable location for artists. Meacci’s account book and related copy invoices, covering the period from 1886 until his death, age 56, in 1893, is in the London Metropolitan Archives. As well as working for Mary Grant, he undertook numerous tasks for Alfred Gilbert and Edward Onslow Ford.

Meacci charged £1.12s on 28 January 1892 for waste moulding, casting and chipping out a bust of Parnell, including a pedestal for the bust, and a further £5.10s on 5 February for “making a Gelatine Mould” of the bust and casting three copies. Waste moulding was a process of forming a mould but at the expense of losing (‘wasting’) the original, which had to be chipped out from the mould. A gelatine mould was a flexible type of mould used in casting. It is very likely that the National Portrait Gallery bust, purchased directly from the artist for £10.10s in 1897, is one of the copies produced by Meacci in 1892. This little-known plaster figure maker is the subject of an entry in the forthcoming directory, British bronze statue founders and plaster figure makers, 1800-1980. Further details of the directory, which goes live in January 2011, can be found at British bronze founders and plaster figure makers.