Queen Elizabeth I by Nicholas Hilliard 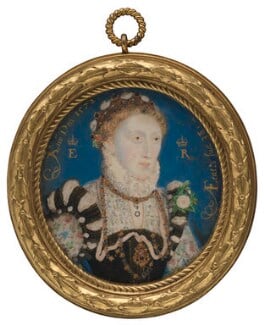 The National Portrait Gallery was founded in 1856 and opened to the public in Great George Street in Westminster in 1859. The first portrait of Queen Elizabeth I to enter the collection was Nicholas Hilliard's early miniature of 1572, painted in watercolour on vellum, which was acquired in July 1860. However, within a few years of its acquisition, George Scharf (1820-95), the Gallery’s Secretary and later Director, was faced with unfamiliar conservation requirements, specifically how to deal with discoloured white pigment in the miniature. Scharf’s Journal, supplemented by his cashbook and by the Gallery’s Trustees minutes, provide insights into the restoration of this miniature and more generally into the care of a new and growing collection.

At a Trustees’ meeting on 6 February 1863, Scharf “submitted to the inspection of the Trustees the miniature portrait of Queen Elizabeth which he had withdrawn from public exhibition on account of several parts of the white surface having changed colour”. The Trustees agreed to his proposal that he should consult “Signor Faija”, who is described in the meeting minutes as “a gentleman much employed in restoring the miniatures in the Royal collection”.

The following week, on Tuesday 10 February, Guglielmo Faija (1803-73) called on Scharf by appointment. He was an Italian miniaturist who had settled in London in 1837 and was patronised by the Royal Family. Faija came to the Gallery “to examine the portrait miniature of Queen Elizabeth” and also two miniatures by Lethbridge, Scharf noted in his Journal, adding that Faija took away the Lethbridge miniatures to repair. These two miniatures in watercolour and bodycolour on ivory, were the work of Walter Stephens Lethbridge (1771-1831) and portrayed Samuel Horsley and John Wolcot. Clearly Faija attended to them promptly since he returned them three days later. Scharf told his trustees at their meeting on 27 March that the miniatures “had been cleverly restored” by Faija. 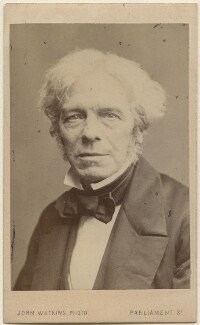 It was however the miniature of Queen Elizabeth which received Scharf's greatest attention. He did not entrust it to Faija. Indeed, on the day that Faija returned the Lethbridge miniatures, Friday 13 February, Scharf records visiting the Royal Institution in Albemarle Street “to consult Dr. Faraday upon the mode of restoring white to discoloured white lead pigment”, adding that he was there introduced to Dr Frankland. Both men were eminent scientists. Michael Faraday (1791-1867) was one of the most celebrated figures of his day, active both as a physicist and chemist, while Edward Frankland (1825-99) was well known as a chemist. On Tuesday the following week, Scharf returned to the Royal Institution to see Frankland “respecting a means of restoring white to the darkened colours on miniatures” and the next day Scharf sent one of his staff to “Gardener’s the chemists” to purchase Hydrogen Peroxide (4 ounces at 1s.6d). On the Friday Frankland came to the Gallery where he “made experiments on miniature with Peroxide of Hydrogen”.

All this was preparatory. At the Trustees’ meeting on 27 March, Scharf reported that he had consulted both Faraday and Frankland respecting the discoloured paint on the Queen Elizabeth miniature, and that “They strongly advised the use of Oxy-water (Per-oxide of Hydrogen), some of which Dr Frankland had procured and, in concert with the Secretary, had made various experiments upon discoloured miniatures similar to the one belonging to the Gallery.” The Trustees endorsed this careful approach and authorised Scharf “to touch upon the Queen Elizabeth miniature, with a warning to use all possible circumspection”. Scharf’s journal entry on Thursday 2 April is short and to the point, “Repairing miniature of Queen Elizabeth”, and would suggest that he carried out the work himself, not so uncommon a practice among museum curators in the mid-19th century. Two weeks later he showed the Trustees the miniature, which he reported that “he had succeeded in restoring to whiteness”.

Why had the Queen Elizabeth miniature blackened in this way? Nicholas Hilliard is known to have used white lead as a pigment and indeed in his treatise claimed that "Of whites, white lead is the best…". The miniature had been purchased from a collection in Jersey in 1860 and the fact that it was withdrawn within a few years of acquisition strongly suggests that it had discoloured since coming to the Gallery.

The basic chemistry is well known. The white pigment, made of lead white, a basic lead carbonate (Pb(OH)2·2PbCO3), turns black in a polluted sulphurous atmosphere, as it reacts with hydrogen sulphide to form a lead sulphide, which is black. London’s atmosphere in the mid-19th century was notoriously polluted, as is apparent from the expert evidence given by Michael Faraday to a committee of enquiry at the National Gallery in 1850. Scharf in his diary records foggy days, such as on 10 January 1861 ("Intensely dark foggy day. Lights burning all day long") and on 25 March 1863 (“Very dark foggy morning. Fog cleared off about 12 o’clock”). Such conditions could continue well into the year, as on 8 May 1861 ("Very dark wet & wretched day. Exceedingly foggy"). The National Portrait Gallery was heated by coal and apparently lit by gas but in any case pollutants will have been pervasive in the London atmosphere.

In the treatment using a very dilute solution of hydrogen peroxide, the lead sulphide is converted to lead sulphate, so usually regaining the appearance of a white pigment. The process was published by Arthur Church (1834-1915), Professor of Chemistry at the Royal Academy, in The Chemistry of Paints and Painting (London, 1890). It is possible that this process was by then not uncommon but its use to treat the National Portrait Gallery’s miniature in 1863 forms a very early documented case study of the successful application of the process in a museum environment.

It is now possible to take this story further. The Hilliard miniature of Queen Elizabeth I  needed treating again in 1866, because there was further discolouration and Scharf again called in the miniaturist Guglielmo Faija who probably repainted the whites. The discolouration is still partly visible. But the seeming success of Scharf's novel treatment in 1863,  led his friend, William Smith, deputy chairman of trustees, to consult Scharf on the precise process so that he could treat a drawing by Cozens (“You will very much oblige me by telling me the exact name of the fluid you use for restoring white – where it can be obtained – and the price.”)

Scharf continued to consult the chemist, Edward Frankland, about the impact of pollution on paper-based materials. He approached him in 1865 asking him to test the paper that he used for his precious portrait notebooks for durability against hydrogen sulphide. Frankland replied reassuringly, 'The paper of your Note-books does not contain any Lead or any other substance which is affected by impure air. The enclosed sample has been exposed for an hour to an atmosphere of pure Sulphuretted Hydrogen [Hydogen Sulphide] without, as you perceive, being in the slightest degree affected. Your sketches will therefore endure as long as the paper on which they are drawn.' This is an exceptionally early example of rigorous testing of art materials.

Scharf approached Frankland again in 1867 'to test Pouncy's Photographs', apparently a reference to an early form of photolithography invented by John Pouncy. Frankland response is worth quoting in full: 'I have tortured your two photographs every way which seemed to me to imitate the “tooth of time”, but, whilst as you will perceive, I have made some impression upon them by very violent measures, I have the strongest reason to believe that the proofs are quite as permanent as printer's ink. I think therefore, that you may confidently use the process for your illustrations…P.S I ought perhaps to have mentioned that there is no similarity whatever between these proofs & ordinary photographic prints. The latter would have been utterly destroyed by tests which produces scarcely any effect upon the former'.