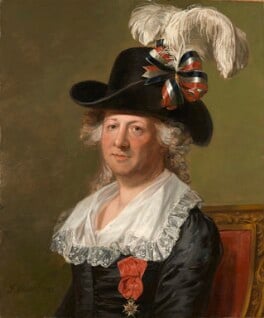 A soldier and diplomat, the Chevalier d’Eon was one of the most colourful and celebrated characters in eighteenth-century Britain. Although born in France, the Chevalier lived in London from 1762-1777 as a man, and from 1786-1810 as a woman. During both these periods d’Eon was a noted figure in international politics, high society and popular culture.

D’Eon first came to London in 1762 as part of the French embassy and helped negotiate the Peace of Paris, which ended the Seven Years War. Despite being awarded the Croix de St Louis, d’Eon refused to return to France when recalled. Instead, d’Eon published secret correspondence that revealed French ministerial corruption and blackmailed the French King by threatening to disclose secret information about French invasion plans. To silence d’Eon, Louis XVI offered the Chevalier an official pension in 1775 but made the unprecedented condition that d’Eon should henceforth dress as a woman. This command was probably due to rumours of female sexuality, encouraged by d’Eon. D’Eon reputedly attended cross-dressing balls during a previous diplomatic mission to Russia and bought corsets while living as a man in London.

D’Eon’s new identity as a woman brought even greater fame. The Chevalier returned to Britain in 1785 and forged a new career performing fencing demonstrations. Popular prints show d’Eon fencing in a black dress such as the one in this portrait, and, as here, d’Eon wore the Croix de St Louis during these fights. In England there was constant speculation and wagering about d’Eon’s gender. It was even the subject of a court trial that declared D’Eon to be a woman. Because the stereotype of a woman dressing as a man to join the army, often in pursuit of her sweetheart was widely recognised, the idea of d’Eon as a woman was accepted. Despite a lack of feminine ‘delicacy’, d’Eon was upheld by pioneering feminists such as Mary Robinson and Mary Wollstonecraft as a shining example of ‘female fortitude’ to which British women might aspire.

This portrait is a copy of one painted by Jean-Laurent Mosnier in 1791. At the height of d’Eon’s fame, the sitter is shown wearing the full cockade of a supporter of the French Revolution. In 1792, the year of this copy, d’Eon wrote to the new French National Assembly, offering to lead an army of ‘Amazon’ women against France’s enemies. This letter was widely reported in the British press and d’Eon was praised for demonstrating courage and patriotism. D’Eon’s sympathy for the new regime in France ended, however, with the execution of the French royal family.

D’Eon’s celebrity status was in itself a considerable achievement. D’Eon was the first openly-transvestite man in British history and no transvestite or transsexual, until the late twentieth century, has enjoyed such public recognition. The Annual Register wrote, ‘It must indeed be acknowledged that she is the most extraordinary person of the age ... we have seen no one who has united so many military, political, and literary talents.’