A short introduction to the history of the porte-crayon.

1. History
2. Artists and porte-crayons
3. The supply of porte-crayons
4. Surviving examples
Acknowledgements and bibliography
Appendix: some portraits of artists with porte-crayons 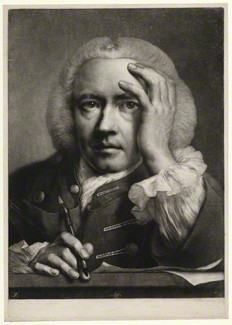 ‘A facility of drawing, like that of playing upon a musical instrument, cannot be acquired but by an infinite number of acts. I need not, therefore, enforce by many words the necessity of continual application; nor tell you that the porte-crayon ought to be for ever in your hands.’ So proclaimed Sir Joshua Reynolds in 1769 in his second discourse to students of the newly founded Royal Academy. What Reynolds proclaimed was not new for there had long been an emphasis on drawing in an artist’s training and practice. To take the case of William Hogarth, he always carried a porte-crayon in his pocket, according to his early biographer, John Ireland (Hogarth Illustrated, vol.2, 1791, p.471).

A porte-crayon as meant by Reynolds was an instrument for holding a crayon, defined in the Oxford English Dictionary as a metal tube split at the ends and held by a sliding ring so as to grasp the crayon. In F.W. Fairholt's A Dictionary of Terms in Art (1854), the porte-crayon was described as an 'implement of brass or steel for holding the chalk or crayon in sketching, to give ease and firmness to the touch, as well as to protect the fingers from the soil of black chalks'. In form, the porte-crayon remained remarkably constant from the 17th century onwards.

The ‘crayon’ took the form of a naturally occurring chalk, usually black, white or red. The holder, usually double ended, protected the chalk, as well as the user's fingers, and allowed short lengths to be used. Many artists are shown in portraits with a porte-crayon with a black crayon and almost as many with white, or with black and white. Relatively few are depicted with red chalk (examples include the works listed in the appendix by Murillo, Largilliere, Boucher, Hone, Therbusch, Terreni and Vigée-Lebrun). 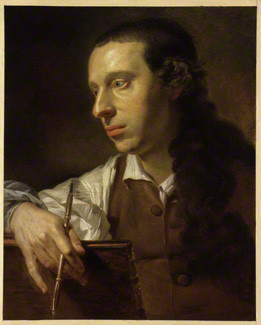 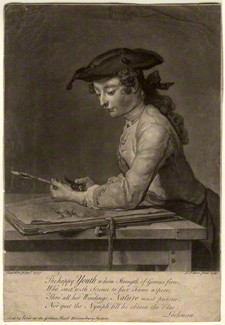 The porte-crayon could also be used for working with black lead or charcoal. It was held at or just above the sliding ring, or sometimes even closer to the point. It could easily be turned round to use the chalk at the other end. The chalk could be sharpened while in the porte-crayon, judging from Chardin’s image, The young draughtsman.

The earliest reference to a porte-crayon in the Oxford English Dictionary is to Thomas Page’s The Art of Painting of 1720 where mention is made of a ‘porto-crion’. John Barrow in his Dictionarium Polygraphicum, 1735, writes of the proper materials for drawing as including 'black-lead pencils or black-lead fix’d in a port crayon'. He recommends making a rough sketch with charcoal, adding 'Your charcoal must be slit into small slender pieces to fix in a port-crayon, for a better conveniency of holding it'. Bernard Lens’s New and Compleat Drawing-Book (1751 edition), describes the drawing instrument as a ‘porcrayon’. In the 19th century, 'port-crayon' is a frequently found form, as for example in a packing list made by John Constable in about 1826 (John Constable: Further Documents and Correspondence, 1975, p.227).

The fullest study of the early history of the porte-crayon can be found in Joseph Meder's Die Handzeichnung, ihre Technik und Entwicklung, published in Vienna in 1919, but here quoted from the later English edition. Meder refers to an earlier form of chalk holder, which took the form of a length of reed into which sticks of charcoal or chalk could be inserted in order to grip them firmly and to lengthen the drawing tool so that the artist could stand further away from his work. Meder mentions two early Italian sources: G.B. Armenino (1587) who calls such a holder a cannella di ottone, stating that it could be made of copper or iron, and was for holding chalk, and Filippo Baldinucci (1681) who describes a chalk holder, called a matitatoio, a metal instrument half a palm long and as thick as a writing quill, apparently double-ended, made so that black and white chalk could be held in the extremities.

The porte-crayon is frequently found in portraits of European and American artists, whether self- portraits or images by fellow artists. While a few such portraits can be found from the 17th century, and even the late 16th century, the great majority belong to the 18th century and early 19th, as the examples given in the appendix indicate. 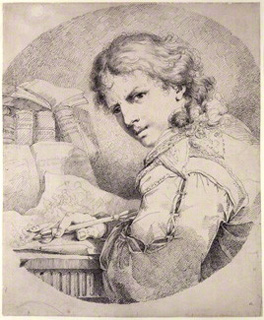 Many of these portraits show the artist in the act of drawing, or with a drawing close by. In others the only indication that the portrait represents an artist is the presence of a porte-crayon, whether or not the artist had a reputation for chalk drawing. The porte-crayon was a straightforward and economical way of indicating the artist’s profession, especially in head-and-shoulders and half-length portraits where space was at a premium. As such, it was the porte-crayon as much as the paintbrush and palette which was included in portraits to identify the individual as an artist, especially in the 18th century. It was the porte-crayon, rather than the pen, which was used in this way because the porte-crayon, unlike the pen, was so very specifically associated with artists. Just as Sir Joshua Reynolds in his discourse used the porte-crayon to highlight the importance of drawing, so Thomas Gainsborough in his portrait of the amateur artist,Lady Ligonier, and his double portrait of his own daughters, chose to use the porte-crayon as a symbol of their commitment to drawing.

The symbolic nature of the porte-crayon is apparent in several morceau de recéption, or reception pieces, of the French Academy, including Joseph Vivien's portrait of the architect, Robert de Cotte, by 1701, Guillaume Voiriot’s Jean-Marc Nattier, 1759, Anne Vallayer-Coster's The Attributes of Painting, Sculpture and Architecture, 1769, and Antoine Vestier’s Gabriel-François Doyen, 1786 (all Musée du Louvre, Paris). 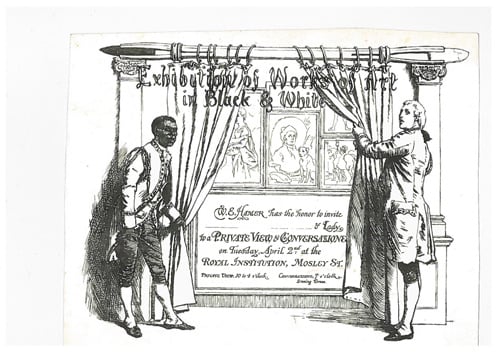 Invitation card, artist unknown, 1870s, to an ‘Exhibition of Works of Art in Black &
White’ at the Royal Institution, Manchester.

In England, when a group of Daniel Maclise’s fellow artists banded together in 1859 to make a presentation in admiration of his cartoons for the fresco in the Palace of Westminster, Meeting of Wellington and Blücher, it was a massive gold porte-crayon that they chose as a token of their esteem, so making the porte-crayon a symbol of excellence in art, as well as being a conscious tribute to Maclise’s powers of draughtsmanship. In an invitation card dating to the 1870s, the use of an outsize porte crayon to support a curtain as it is drawn back reinforces the idea of the primacy of drawing.

In America, the term, ‘porte crayon’, became familiar in the mid-19th century from the work of David Hunter Strother (1816-88), a draughtsman and illustrator born in Martinsburg, Virginia, who was popularly known under his pseudonym, ‘Porte Crayon’.

Why does the porte-crayon rarely appear in portraits after the 1840s? The obvious explanation is the apparent decline in the use of the porte-crayon; pencils in their modern form and other drawing instruments became more popular and chalk fell out of use, while some artists came to prefer oil sketches rather than drawings as preparatory devices. But there was also a move towards a more naturalistic style of portraiture, in which artists chose to be seen at work at the easel with brush in hand.

Porte-crayons were made in a variety of materials but most commonly in brass. In France in the 17th and 18th centuries, they seem to have been available in silver, as well as copper or brass (Claude Boutet, Traité de la peinture en mignature, The Hague, 1708, p.260).

In the 18th century, porte-crayons were available from businesses in London selling drawing supplies, as for example in 1754 when Celeste Regnier advertised artists’ equipment, varnish for jappaning, colour prints and also portecrayons from her premises in Newport St in London (Public Advertiser 1 August 1754), while the engraver, Matthew Darly, offered silver, steel and brass ‘portcreyons’ (broadside, c.1776).

As with so many other specialist metal items, the dominant British manufacturing centre appears to have been Birmingham, judging from a limited number of early references in trade directories and advertisements. In 1830 Cope and Cutler of Jennen’s Row, Birmingham, advertised pencil cases and port crayons among other items, while in 1835 the steel toy manufacturer, John Forester Luckett, was listed at 3 Court, Essex St, Birmingham, as a maker of the ‘steel port crayon' (see West's History, Topography and Directory of Warwickshire, 1830, and Pigot’s Directory of Derbys…, 1835). 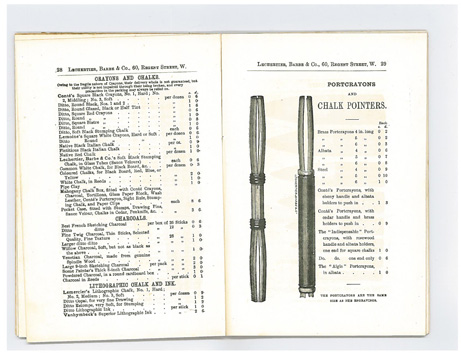 In the 19th and 20th centuries, porte-crayons were sold by most leading firms of artists’ suppliers until at least the 1930s. In England many of the leading firms, including Lechertier Barbe, Reeves, Rowney and Winsor & Newton, anglicised the term as portcrayon or port-crayon, while in America some companies used the obvious English translation, crayon holder. In London in 1851 Lechertier Barbe were selling brass examples lengths 4ins, 5 ins and 6 ins and also in German Silver length 6 ins. Winsor & Newton in the late 1850s featured a wide range, mainly in lengths 5 ins or 6 ins, described as French Brass, Best Brass, Albata (up to 9 ins), Steel and ‘New French Crayon Holders with Wooden Centre’. Albata was a term used to describe an alloy also known as White Metal or German Silver. Rowney’s range in 1893 included brass, plated, albata and steel holders, the latter as long as 9 ins. In America, a New York company, F.W. Devoe & Co, in about 1881 was offering brass holders in lengths 5 ins, and 6 ins, 8 ins, 10 ins and 12 ins, and continued to do so into the 20th century. 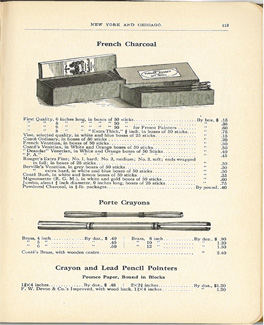 On the continent of Europe, porte-crayons were a standard catalogue item. For example, in France porte-crayons were marketed by Bourgeois Ainé, Paris, in June 1906 in various models and lengths from 11 to 16 cm (Catalogue Illustré, Couleurs Fines et matériel d’Artistes). In Germany and Austria, the kreidehalter reproduced in the catalogue of Günter Wagner in 1904, trading from Hanover and Vienna, came in lengths of 13 and 16 cm (Preisliste Nr. 20B). In Spain the brass porta lápices was sold in six lengths from 11 to 17.5 cm by Viuda de E. Texidor, Barcelona, in 1910 (Precios Corrientes de la casa Viuda de E. Texidor).

Porte-crayons are rarely found today because they have been routinely discarded as items of little interest. They occasionally appear at auction where early examples can fetch as much as £100. They can also occasionally be found for a few pounds in shops and stalls selling antiques and collectables. Marked porte-crayons are occasionally found, for example, stamped REEVES & SONS LTD. Porte-crayons are made today as replicas by Peter Goebel at the Goose Bay Workshops at Bridgeville, Delaware.

It is hoped to develop this study further. Please provide feedback to the author at [email protected].

With thanks to Antony Griffiths for observations on the circumstances leading to the decline in the use of the porte-crayon and to Suzanna Walker for help in researching the appendix. Reproductions other than of paintings are from material in the author’s collection.

Appendix: some portraits of artists with porte-crayons
The portraits listed are paintings unless otherwise stated. NPG indicates the National Portrait Gallery, London. 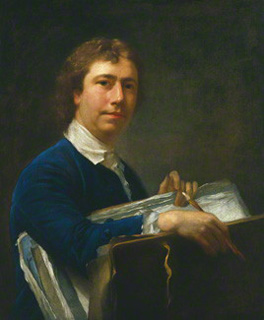