Like other portrait painters, Thomas Lawrence maintained a studio and showroom conveniently located for his sitters. As the miniaturist, André Rouquet, explained in The Present State of the Arts in England (1754), 'Every portrait painter in England has a room to show his pictures, separate from that in which he works. People who have nothing to do, make it one of their morning amusements, to go and see these collections'.

Fig.1. The Portrait Painter’s Showroom, aquatint for William Combe’s The History of Johnny Quae Genus, 1822, from a drawing by Thomas Rowlandson of 1809.
Click on image to view larger version

A showroom or gallery would have been important for Lawrence in attracting sitters when he set up in London in 1787. By the time he moved to Russell Square in 1814, now the leader of his profession, it would seem that his gallery had become more a place for sitters and those on business to wait, rather than a space for public parade. However, the evidence on Lawrence's use of his successive showrooms is limited.

When the 17-year-old Thomas Lawrence moved from Bath to London early in 1787, he took lodgings at 4 Leicester Square, close to Sir Joshua Reynolds’s premises (Williams 1831, vol.1, p.95). By the end of the year, he had moved to 41 Jermyn Street (now no.36), where he had rooms above a milliner’s. There his painting room overlooked a churchyard, that of St James’s, a discomforting prospect to some of his sitters (Williams 1831, vol.1, p.109). In 1790, his full-length portrait, Queen Charlotte (now National Gallery) was advertised as being available to view at his Jermyn Street premises from mid-January to promote Francesco Bartolozzi’s proposed but never published engraving of the picture (The World, various issues from 16 January until 25 February, accessed through Burney Collection Newspapers online). The painting then went to the Royal Academy exhibition where its presence may have further established Lawrence's showroom as a place to visit, judging from a newspaper report a few months later: ‘Lawrence, for a young painter, gets a levée at his door, that almost fills one part of Jermyn Street’ (The British Mercury, no.37, 11 September 1790, p.348, accessed through Google Book Search).

Lawrence moved several times, successively occupying premises in Old Bond Street, Piccadilly and Greek Street, within reach of the fashionable districts where many of his patrons lived and also of the picture framemakers of Soho. In 1790 he took lodgings at 24 Old Bond Street at the corner of Burlington Gardens, apparently above the premises of the engraver, William Dickinson. There he remained until 1794 (he was listed at no.29 in the 1794 Royal Academy catalogue, perhaps mistakenly) but he had to move out following Dickinson's bankruptcy. He then initially considered moving to Bruton Street (Farington, vol.1, p.260), before taking a rather grand house in Piccadilly opposite Green Park from Christmas 1794, using this address for his Royal Academy exhibits over the next three years.

Following the death of his parents in 1797, Lawrence economised by moving his studio to their house at 57 Greek Street, two doors from Soho Square. As the dramatist and biographer, James Boaden, explained, describing the actress, Elizabeth Inchbald's sittings to Lawrence, 'At this time it was of importance that his gallery in Greek Street should exhibit the beginning of portraits, to which the eye might be attracted as the mirrors of either rank, beauty or genius' (James Boaden, Memoirs of Mrs Inchbald, 1833, vol.1, p.349). Lawrence was offered Joshua Reynolds’s former premises in Leicester Square in 1807 but such were his finances that he decided to remain in his Greek Street studio (Royal Academy Archive, LAW/1/159, quoted in Layard 1906 pp.47-8). He found 'its comparative retiredness both pleasant and advantageous' (LAW/1/289).

At the very end of 1813 or soon after, Lawrence moved to altogether grander but less central premises at 65 Russell Square, a terrace house recently constructed on the square’s eastern side (more precisely almost north-eastern). Within days of moving, he took up his pen to describe his new home, to one of his friends (Royal Academy Archive, LAW/2/53, partial draft, 5 January 1814, quoted in Layard 1906 p.90). The fitting out work appears to have been supervised by another friend, the architect Sir Robert Smirke (Layard 1906 p.87). Lawrence described his front room as his showroom, with his portrait, Kemble as Cato (National Portrait Gallery) over the chimney, despite suffering a yellow paper ‘that I know is hurtful to my pictures’. He had his painting room (fig.3) re-papered in a rich crimson, bordered by a gilt moulding fixed on a one-inch black flat; it would seem that this room was at the back of the house. These public rooms can be identified as being situated at first floor level.

It is less easy to be confident about the location of his own living rooms. His ‘private sitting room’ (fig.4), would probably have been on the ground floor at the back of the main house. His ‘back parlour’ was intended as a ‘common living room’, with a small room to its right reserved for his servant, Edward Holman, ‘and all his luxury of oils, varnishes, colors, &c &c’.

Sometimes, the comings and goings of Lawrence’s illustrious sitters in Russell Square became a matter of public interest, as in 1814 as one observer recalled years later, ‘We shall never forget the Cossacks mounted on their small white horses, with their long spears grounded, standing sentinels at the door of this great painter while he was taking the portrait of their General, Platoff‘ ([John Mitford], Gentleman's Magazine, vol.29, 1848, p.11; the portrait is in the Royal Collection). The same year, Field-Marshal Blücher sat to the artist. According to Lawrence's close friend, Elizabeth Croft, ‘The mob in Russel Square rushed in in a frightful manner even the first time Blücher sat, lining the staircase and filling the gallery; and at length it was scarcely possible to keep them out of the painting room except by the aid of Bow Street officers’ (Layard 1906 p.258; the portrait is in the Royal Collection).

Lawrence’s was one of the more substantial houses in Russell Square, next to Bolton House in the terrace south of Guilford Street, as old photographs show (see Lawrence 2010 p.xvii). It was demolished and replaced by an extension to the Imperial Hotel in 1911. Lawrence’s premises can be identified on the largest scale Ordnance Survey map (sheet VII.53, surveyed 1871, published 1875, scale 1:1056 or 1 inch to 88 feet), suggesting a frontage of some 36 feet and a depth of about 48 feet to the main part of the house or about 60 feet including the rear part. This is confirmed by the insurance policy which Lawrence took out with the Hand-in-Hand Insurance Society, commencing 1 November 1813, where his four-storey premises at 65 Russell Square were noted as width 34 feet, depth 50 feet, with additionally two further areas listed, sizes 17 by 14 feet, presumably the rear part of the house, and 8 by 4 feet, perhaps a privy (Guildhall Library, MS 8675/3, p.82; the policy was renewed in 1814 and 1822). There was also a coach house of 34 by 24 feet, which was presumably accessible from the mews, described by Lawrence as behind his house (Williams 1831, vol.2, p.262). 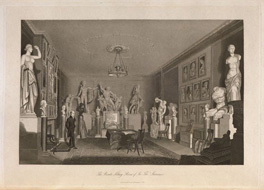 Lawrence’s showroom was presumably on the first floor, overlooking the square, with three windows facing south westerly. His painting room can tentatively be placed in the rear part, with the window on the long wall, facing south-easterly. Such a positioning of Lawrence’s painting room is broadly consistent both with Emily Calmady’s drawing of the room in 1824 (fig.3), showing the light coming in from the right, and with the American naturalist and artist, John James Audubon’s description of his visit to Lawrence in 1826, when he was utterly astonished to find that the room had a southern light (he was there for breakfast when the morning sunlight would have been most evident) ‎(Robert Buchanan (ed.), Life and Adventures of Audubon the Naturalist, 1868, p.118).

Lawrence subsequently altered these premises. In November 1821, he told his long-standing friend and patron, John Julius Angerstein, that he was planning to convert his attics into a large room or two for his pupils and assistants, so releasing a second living room below. The work was to be carried out to Smirke’s design (Williams 1831, vol.2, p.261). In 1824 David Wilkie, Lawrence’s friend and fellow academician, wrote to the collector and patron, Sir George Beaumont, with a different interpretation, whether correct or not, that Lawrence had formed a ‘show-room or gallery – large and magnificent – at least 50 feet long’, which had been converted from the two upper storeys of his house (Allan Cunningham, The Life of Sir David Wilkie, vol.2, 1843, p.137).

Two years after Lawrence’s death, the artist, Benjamin Robert Haydon, described his premises: ‘I passed Lawrence’s house. Nothing could be more melancholy or desolate!’. He identified Lawrence’s painting room as a large back drawing room and his showroom as a large front one. He characterised the room where his assistants worked as ‘an immense room, where all his manufactory was carried on of draperies, etc, divided, yet open over the Division…. It must have been five or six rooms turned into one large workshop’ (W.B. Pope, ed., The Diary of Benjamin Robert Haydon, vol.4, 1963, pp.615-6).

2. Lawrence at work
Introduction (for works cited in brief)