Conservation treatment of a portrait of Anne Boleyn 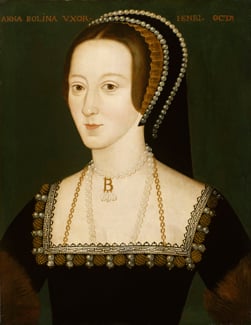 In 2010 the Gallery’s portrait of Anne Boleyn, NPG 668, which is usually on display in Room 1, was brought to the conservation studio to undergo a cycle of technical analysis as part of the ‘Making Art in Tudor Britain’ project. As one of the Gallery’s most popular Tudor portraits the research team were keen to discover more about how this painting had been made, and particularly to see whether technical analysis could help to date the work.

During the analysis it became apparent that the wooden panel support had become structurally unstable and that this was affecting the surface of the painting.

Stabilising the panel required intervention by structural panel painting conservators and the painting was put back on display whilst the funds for treatment were raised through the generosity of public donors. Towards the end of 2011 the painting and frame were sent to a specialist conservator for an intensive programme of treatment.

The complex behaviour of wooden panels is understood to be largely linked to the response of wood’s cellular structure to atmospheric moisture.  Wood is ‘hygroscopic’, meaning it will naturally take up (‘adsorb’) or emit (‘desorb’) moisture from the air in response to changes in humidity.  As ambient humidity rises, moisture is taken up by the wood and its cells expand.  Conversely, if there is a drop in humidity the wood emits moisture and the panel may shrink as the wood cells reduce in size.  If a panel painting experiences frequent expansion and contraction, fractures and other weaknesses may emerge in the wood structure, which can pose a risk to the painted surface. Furthermore, in a panel painting such as the portrait of Anne Boleyn, the paint itself acts as a moisture barrier, which slows the moisture exchange process across the surface while the uncoated back of the panel can expand and contract. This is a contributing cause to the convex warp that we generally see in unrestrained panel paintings such as NPG5175.

Photograph showing the curvature of the panel in the ‘Coronation’ portrait of Elizabeth I, NPG 5175

As approaches to conservation have developed, so has understanding of the best practice to preserve panel paintings.  In the past panels may have been thinned, reinforced, braced and pinned into frames in order to keep the boards from warping.  Research into the behaviour of wood and panel painting supports over the last 50 years suggests that a minimal approach to panel support is preferable. Key elements of current preventive conservation practice for panel paintings are the control of  ambient temperatures and relative humidity (RH) and bespoke framing systems.  Frame Conservators at the National Portrait Gallery have devised a climate buffered framing system which is based on the principle that if a panel within the frame is sealed from ambient humidity, the rate of moisture exchange from the environment to the inside of the frame is significantly reduced.  The environmental stability established within the climate buffered frame inhibits the movement of the wood while specially fitted glazing spacers support the profile of the panel.

The characteristic warp of a panel is not considered to compromise the panel’s internal structure; however, problems occur if the wood is prevented from moving by panel pins, tight framing fixings and cradles.  A cradle is a traditional wooden structure applied to the back of a wooden panel as a secondary support in an attempt to counteract the convex warp. Cradles commonly consist of a latticework of close, even-grained wooden battens, with vertical members glued to the back of a panel and sliding horizontal cross-grain members. 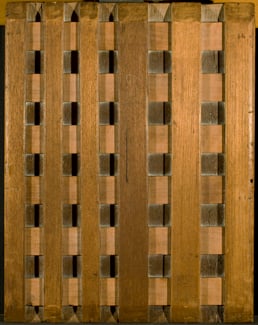 Photograph of the reverse of the
painting showing the wooden cradle
attached to the back of the panel.

The portrait of Anne Boleyn was painted on a panel constructed from two oak planks.  As with many surviving panel paintings produced in the Tudor period, structural alterations have been made since its completion in order to attempt to control the movement of the wood and therefore to preserve the painting through the centuries.

The panel has been restrained by cradle additions at least twice in its history: at some point before it was acquired by the National Portrait Gallery in 1882, and again in 1967.  This later cradle on the back of the panel was a ‘blind’ type whose six vertical members were glued into a fixed position on the back and the six horizontal sliding members were contained by the left and rightmost fixed members.  There were clear signs that the panel was under significant stress from the cradle.  Many of the splits seen in the panel can be attributed to the presence of the cradle having prevented the natural movement of the wood. Localised points of stress had evolved and cracks had developed along the wood grain.

At some point the panel had been thinned from 0.6-0.8 cm, to a thickness of 0.3-0.4 cm.  This exposed extensive historic woodworm channelling.  Both the thinning and the presence of the woodworm had compromised the strength of the panel, and it appeared that a section of the original woodworm damage along the left-hand board (when viewed from the back) had been removed and replaced with an additional narrow piece of softwood.

A full assessment of the nature of the wooden cradle was undertaken and it was found to be rigid and the sliding battens to be immobile.  The stress exerted on the panel by the cradle was exacerbated by the glued cradle members restricting the panel’s movement.  This was causing a number of fractures, undulations and damages in the wood panel creating a ‘washboard’ effect. This was evident on viewing the painting in raking light. 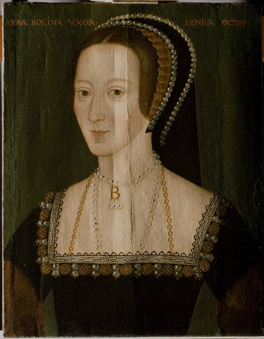 Photograph of NPG 668 taken in raking light showing the undulations in the panel. 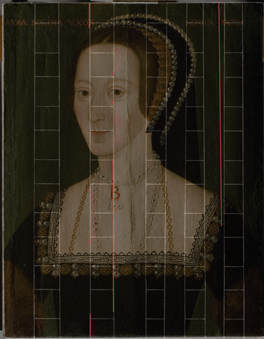 Photograph in raking light with a plan of the cradle mapped onto the surface, showing the correlation with the undulations in the panel.

A stiff board was tailor-made to fit the contours of the front of the panel and support the painting while treatment was being carried out on the reverse.  The individual vertical wooden members of the cradle were carefully thinned to reveal the horizontal battens, which were then divided into sections and removed piece by piece.  Where the wooden cradle was glued  to the back of the panel it was meticulously thinned until a paper-thin veneer remained.  This thin wood layer and its glue could then be softened with an aqueous gel before being gently removed mechanically.  The vulnerable fractures were exposed and were secured with a protein glue, while splits in the wood panel were secured and filled with a conservation grade adhesive and filler. 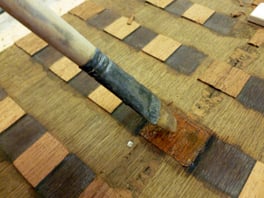 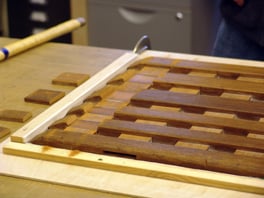 Photograph taken during the removal of sections of the vertical cradle battens. 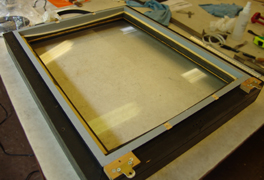 Construction of the frame housing with tailor-made curved glazing spacer.

In order to construct an environmental enclosure, the rebate, which holds the painting in place within the frame, was lined with aluminium tape as a moisture barrier.  Low-reflective glass was then sealed in place using silicone adhesive. Within the frame itself a profiled glazing spacer was made and inserted to accommodate the convex curvature of the panel, supporting it from the front.

The panel was secured into the frame with flexible spring steel clips, which hold the panel in place without exerting pressure on it. The backboard was then lined with aluminium foil-backed polythene and polyethylene film and secured onto the back of the frame with a rubber sealing strip. Finally it was screwed onto the reverse of the frame and sealed with Alumium tape.

The painting is now on display in Room 1 and it is possible to see the curve of the panel through the glazing, which helps to understand the painting as both a portrait and a three-dimensional object. 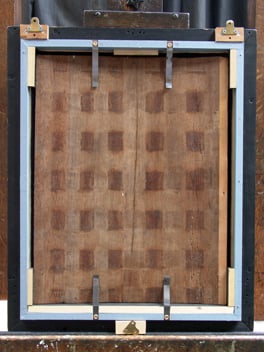 Reverse of the panel secured in the frame after treatment. 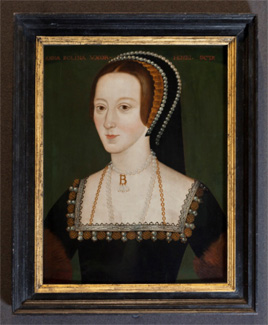 The painting on display at the
National Portrait Gallery. The curve of the
panel is visible in the frame at the lower
edge.

The removal of the wooden cradle has allowed the painting to undergo dendrochronological analysis following the conservation treatment. This was not possible when the painting was first examined in 2010 because the cradle blocked access to the ends of the wooden boards, which is where the dendrochronologist takes measurements of the tree rings. The new analysis showed that the panel is constructed from oak from the Eastern Baltic, which was a common material used for panel paintings in England. It also showed that one of the boards came from a tree that was felled after 1584. The painting was probably made in the late sixteenth century, based on a likeness of Anne Boleyn that was taken when she was married to Henry VIII, and the size and format suggests that it originally formed part of a set of portraits of kings and queens.