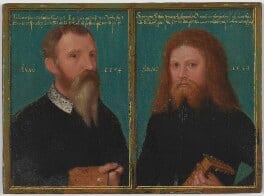 This small painting depicts the German artist Gerlach Flicke (1545-1558) when resident in London, with his friend the English gentleman-privateer Henry Strangwish (died 1562).

This highly unusual double portrait was painted when both men were in prison - probably the Tower of London - Strangwish for piracy, and Flicke for an unknown crime. It is the earliest surviving self-portrait in oil produced in England. We don't know when Flicke came to England but he was certainly in London by 1546 and died here in 1558.

See the questions below to find out more

Question 1: How did the artist plan this portrait? 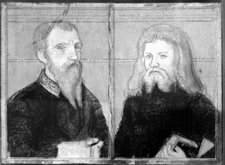 Using infrared reflectrography we can see that the artist made a drawn design before starting this painting. The drawing is quite free, delicate and skilful, indicating that the portrait was carefully planned and included most of the key facial features. The underdrawing carefully details the main elements of the composition, such as the shapes of the eyes of Flicke and Strangwish. The artist also laid in some of the details of the costume.

To ensure the inscription was perfectly level Flicke ruled lines as a guide. These can be seen in the infrared photograph below. 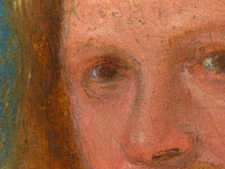 Detail of side of Strangwish's face - showing underdrawing visible beneath flesh 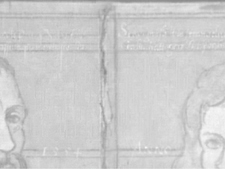 Question 2: What are the colours on this artist's palette? 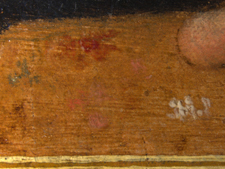 The palette which Flicke holds (denoting his profession) has pigments shown upon it that were suited to portrait painting: these have been identified as crimson lake (red), azurite (blue), a dark brown, and mixed shades of pink and lead white for the flesh paint. 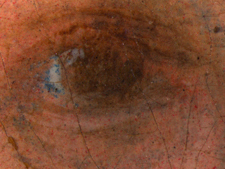 Gerlach Flicke painted other portraits during his time in England, for example of Queen Mary I, Sir Peter Carew and Thomas Howard, Duke of Norfolk. One of his most accomplished portraits depicting Archbishop Cranmer was painted in 1546. This portrait also includes many of the pigments which appear on Flicke's palette in his self-portrait. 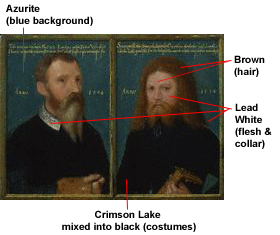 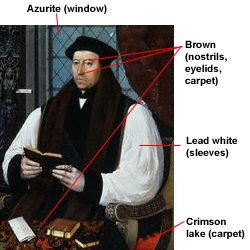 Question 3: How was this portrait made? 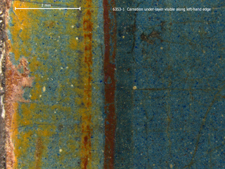 The portrait was painted on paper, which was then mounted onto a wooden panel. A thick lead white layer is underneath the paper. A warm pink layer of preparation made from lead white with vermillion and traces of yellow ochre was painted on top of the paper/parchment. This was a common layer to include in portrait paintings and miniatures.

The paper, and paint layers are visible in the cross-section below: 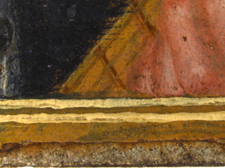 We do not know when the paper was attached to the wood, it might have been applied by the artist to provide greater protection to a small picture, which could easily fit into a pocket.

It is interesting to consider why the portrait has been presented in this way. It is possible that Flicke gave the picture to Strangwish as a gift. The inscription over Strangwish's head certainly suggests that Flicke made the picture for his friend:

'One prisoner for thither hath done this,
Gerlin hath garnisht for his delight
This woorck whiche you se before youre sight.' 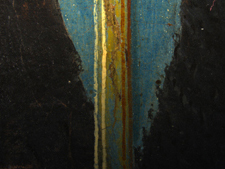 Gift-giving was an important activity in Tudor England and indicated affection, friendship and respect. The double portrait might have served as a memento to remember their time together in adverse circumstances.

Question 4: What does the yellow writing say?

The inscription tells us the story of why this portrait came to be painted. It suggests it was painted whilst both men were imprisoned. The words 'Anno 1554' are added either side of the head on each of the men, showing the year it was painted.

Flicke had been working in England since at least 1546. He may have been imprisoned in connection with a popular uprising (Wyatt's Rebellion) that occurred in 1554 during the reign of Mary I in reaction to her marriage to Philip of Spain. Flicke depicts himself with palette in hand showing his profession as an artist. The inscription in Latin suggests that he may have expected his imprisonment to end in execution. 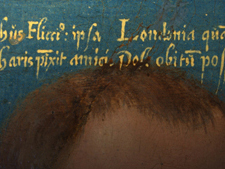 This can be translated as:
Such in appearance was Gerlach Fliccius, at the time when he was a painter in the city of London. This portrait he painted from a mirror for his dear friend, that they might be able to remember him after his death.

It is very unusual for an artist to tell us how he produced his work and why. The reference to the use of a mirror is particularly interesting. It was not until the mid sixteenth century that crystal glass mirrors were imported into England: they were a great novelty and expensive luxury items. It is possible that Flicke used a cheaper steel and silver mirror, made of alloyed metal, that slightly distorted the reflected image. This might be why his own portrait is quite loosely focused. 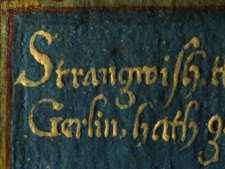 Strangwish was reportedly Flicke's friend and had the nickname the 'Red Rover of the Channel'. He became renowned in the 1550s for his activity as a 'gentleman-privateer', roving Europe in search of plunder. It is probable that he may have been opposed to the marriage of Mary I with Philip of Spain and was a member of a group of pirates who aided France in capturing Spanish galleons. This event may have led to his imprisonment in 1554. Although by the 1560s Strangwish was a trusted officer in the service of Queen Elizabeth I. In this portrait Strangwish is shown with a lute.

Over his head is written in English:
Strangish thus strangely depicted is
One prisoner for thither hath done this,
Gerlin hath garnisht for his delight
This woorck whiche you se before youre sight.

How did the artist plan this portrait?