Why are the four portraits of Edward all slightly different? 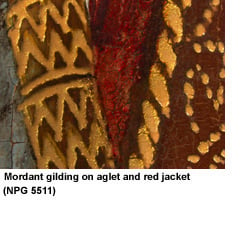 Even though Edward VI (1537-1553) only lived for 16 years and reigned for just six years, a surprising number of portraits of him exist both as Prince of Wales and as King. The multiple images reflect his importance as Henry VIII's only male heir. During Edward's lifetime the ownership and display of his portrait became important also as a way of showing allegiance to the new Protestant faith.

Edward was drawn from life by the king's painter Hans Holbein and by other important foreign artists. Very soon afterwards many other versions of these portraits were made for widespread consumption. 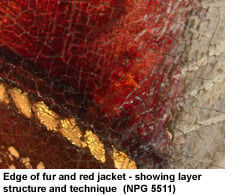 Portraits of Edward in full-length format, (for example NPG 5511), date from around 1547 and at least four contemporary versions exist. The earliest shows Edward as Prince (Royal Collection, Windsor). Others are at the Louvre, the National Trust, Petworth House and Audley End. This type (sometimes in half length format) became one of the most popular ways to represent Edward in the Elizabethan and Jacobean period. The National Portrait Gallery version shows Edward in very richly decorated costume. The painting materials (with gold and silver leaf evident in the micro details on the left) probably reflect the materials in the actual fabric worn by Edward. 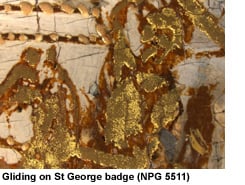 Portraits showing Edward in profile were also popular within his lifetime. For example NPG 442 (above) shows Edward VI as Prince of Wales just before he succeeded his father in 1547 aged nine. The earliest version of this type has been ascribed to the Netherlandish artist William Scrots is dated to 1543 and is in the Metropolitan Museum in New York.

The anamorphic portrait NPG1299 (right) is also based on this profile type. Xray has revealed the signature on the frame: guilhelmus pingebat, making it likely the attribution may be accurate.

Examination of the anamorphic portrait revealed some interesting findings about different parts of the painting. The style, paint handling and pigments of the landscape differ considerably from those within the oval. These differences indicate that these areas were painted by two different artists.

Details from the outer landscape 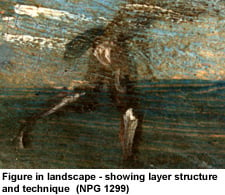 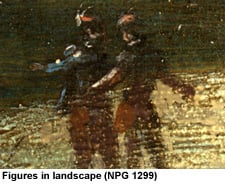 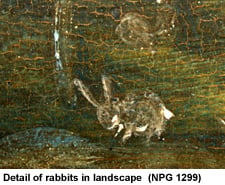 Details from within The Oval 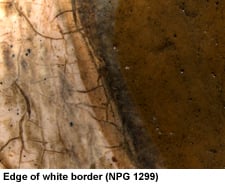 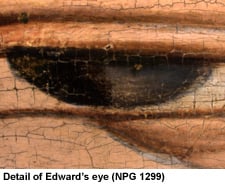 How do we know when these pictures date from?