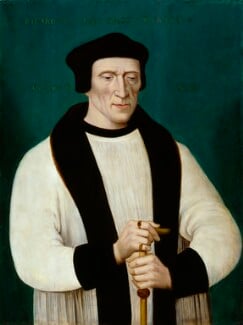 This portrait shows Richard Foxe, Bishop of Winchester (1446-1528). Foxe was in charge of Henry VII's administration early in his reign, and undertook important negotiations on his behalf, including the marriage of Prince Arthur and Katherine of Aragon. He appears here in half-length, wearing a Bishop's chimere, a black sole, and a black hat, his hands clasping the top of a stick.

An inscription appears at the top left of the portrait: RICARDVS FOX ESPISC. WINTON. (an abbreviation for the title of Bishop of Winchester). It is also inscribed with the letters MDXXII, suggesting a date for the likeness of 1522. The portrait was once considered to be a sixteenth century painting. However, recent research has revealed that the portrait must now be considered as a nineteenth century copy of an earlier work.

Question 1: What do the pigments tell us about the portrait? 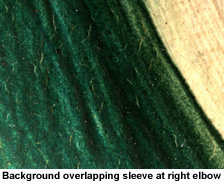 Analysis of paint samples from the portrait has revealed new information about the date at which this picture was painted. The green background was found to contain the pigment prussian blue. The earliest recorded use of this pigment is the early eighteenth century. Another type of white lead pigment (‘prismatic’ white lead) first available in the nineteenth century was also detected. These pigments were found in the original paint structure. 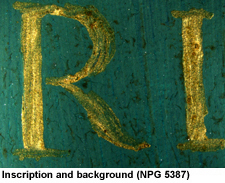 Question 2: What can we tell about the portrait from the artist's technique?

The painting style and execution also uses more recent methods. For example there are florid touches in the handling of the flesh areas (in the yellows and highlights), which are not consistent with sixteenth century technique. The background paint is freely applied with the ground showing through which bleeds into the figure along the edge of the sleeves.

Some of the first marks made by the artist when planning the portrait can be seen in Foxe's eyes, nose and eyebrows. The style of this underdrawing has the appearance of hesitant sketch marks, comparable to those made by an artist trained in a late-eighteenth and an early nineteenth-century. However, on the surface the painting style seems to be a good example of a competent later artist attempting to mimic early Tudor painting techniques. 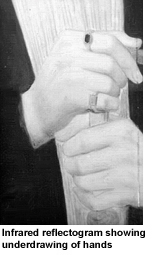 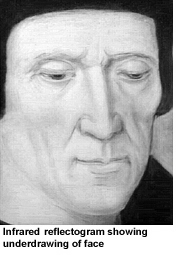 Question 3: Can we date the wood that the portrait was painted on?

The portrait was analysed using dendrochronology. This technique of tree-ring dating can be used to help date panel paintings on wood. It can provide a date after which a tree was felled and estimate when the wood might have been used for a painting.

Analysis of the wooden panel of this portrait revealed the wood derives from a tree which cannot have been felled before 1597. The wood for this portrait seems to come from a reused German or Dutch panel. From what was concluded about the underdrawing, painting style and pigments used we now know a late sixteenth-century panel has been employed for a portrait of a much later date.

Question 4: What was the original portrait that the artist copied? 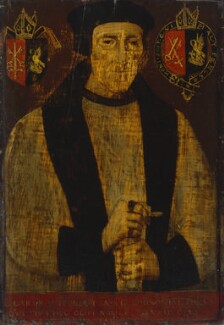 The portrait copies a pattern taken from an original portrait of Richard Foxe. This prototype is likely to be that made by Johannes Corvus now at Corpus Christi College, Oxford. The date of this portrait remains unknown, perhaps the mid 1500s.

There are many other versions of this portrait, all showing Foxe with the same facial type and pose. Another portrait at the National Portrait Gallery (NPG 874) of similar size and pose is very badly damaged, but does date to the late sixteenth century.

This portrait was once very colourful and eyecatching. Some of this detail is still visible, for example in the shield in the background and the lettering. 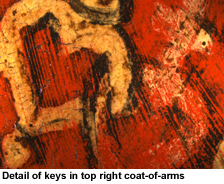 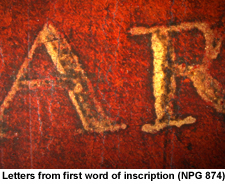 What do the pigments tell us about the portrait?