The Making Art in Tudor Britain project has examined eight portraits ‘after Hans Holbein the Younger' in the National Portrait Gallery collection using various types of technical analysis. This research allowed for a closer look at how images originally painted by Hans Holbein came to be copied or repeated. This also led to a better understanding of the conditions under which these paintings were made, why they were created and how they were viewed by their audiences. The sitters of all eight portraits are important people from the reign of King Henry VIII.

Why were these copies made?

Dating the panel ... at what point were these copies made?

How were these copies made?

16th century, after a portrait by Holbein from c.1540-43 now in the Isabella Stewart Gardner Museum, Boston

16th century, after a portrait by Holbein from 1533-34 now in the Frick Collection, New York

Late 16th century, after a portrait by Holbein from 1528 now in the Musée du Louvre, Paris

16th century, after a portrait by Holbein from 1527 now in the Frick Collection, New York

16th century, after a drawing by Holbein from c.1535 now in the Royal Collection

Late 16th century, after a portrait by Holbein from 1536 now in the Galleria degli Uffizi, Florence

Late 17th century, after a portrait attributed to Holbein from c.1540 now in The Toledo Museum of Art, Ohio

Early 17th century, after a portrait by Holbein from c.1527 now in the Musée du Louvre, Paris

Question 1: Why were these copies made? 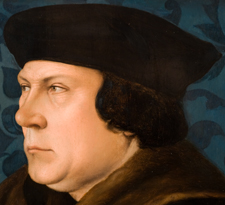 Holbein first came to England in 1526-8 and returned for a second visit in 1532 when he remained until his death in 1543. He was recognised as an artist of remarkable talent and his patrons included not only the King, but many courtiers and noble visitors. His work was greatly in demand, particularly during his second period of time in England.

Details for a portrait if Thomas Cromwell, Earl of Essex, after Holbein (NPG 1727), showing the skilful handling of the copyist

There are a range of reasons why additional versions or copies of an original portrait may have been made. For example, over the course of the sixteenth century the practice of collecting portraits became more popular among the nobility in England. Clients may have commissioned versions of their portraits for the collections of friends and family. Likenesses were collected and displayed in galleries and throughout country houses, depicting not only monarchs but also courtiers and their wives, foreign diplomats, statesmen and even writers and others of fame and talent. 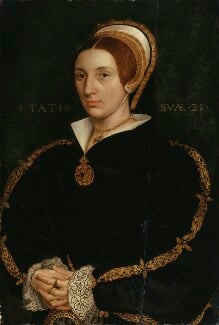 This portrait of an unknown woman, formerly known as Catherine Howard (NPG 1119), highlights one of the many problems found when dating versions and copies. The original version, now in The Toledo Museum of Art, Ohio, was identified as Catherine Howard but this has since proved to be incorrect.

The painting style of the copy is more consistent with late seventeenth or early eighteenth-century workmanship. There is a variation in the quality of paint handling throughout the image. For example, the hands, face and fabric appear fairly simply painted, while the jewellery is very finely painted. 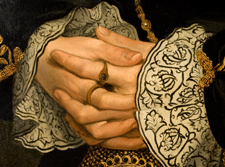 Question 2: Dating the panel... at what point were these copies made?

Evidence from dendrochronology has provided some surprising results. Nearly all the National Portrait Gallery versions of portraits after Hans Holbein were proved to date from between thirty and sixty years after Holbein's death. Therefore, they appear to be skilled copies produced for later collectors, either as examples of Holbein's skill in constructing portrait composition or because of a demand for a portrait of the individual sitter.

The table above displays information gained from the use of dendrochronology in the Making Art in Tudor Britain project. The date of original portrait refers to the date of the portrait painted by Hans Holbein the Younger. Within the table is also the date of the last tree ring from the wooden panel of the National Portrait Gallery version, followed by the estimated date range for the felling of the tree used to make the board. The final column indicates the wood type used for the panel. There is some variation, although Eastern Baltic oak is the most commonly used type.

Question 3: How were copies made? 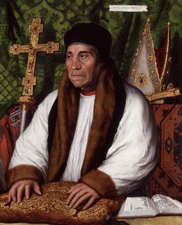 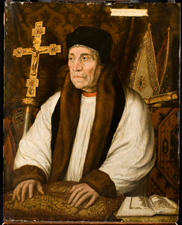 William Warham, after Hans Holbein the Younger, Lambeth Palace By kind permission of the Archbishop of Canterbury and the Church Commissioners

Although many Holbein copies exist, the high quality of the work Holbein created is rarely matched. However, the quality of some of the versions after Holbein, and their dating within the sixteenth or seventeenth century, makes them worthy of further study.

Holbein himself was known to make copies and was well equipped with his own drawings and patterns to make replicas. Several included notes on colours and fabrics. The outlines were transferred by tracing or by pricking holes and pouncing (shaking charcoal dust through the holes to mark out a pattern). Whether Holbein's drawings were available for use directly after his death is as yet unclear. 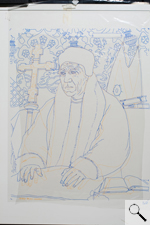 Traced overlay showing the similarity in composition between the two versions of a portrait of William Warham after Hans Holbein the Younger, pictured above. 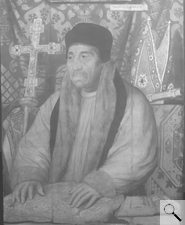 All eight of the versions after Holbein in the National Portrait Gallery collection are of varying quality and skill. The portraits are all by different artists indicating that numerous different late sixteenth and early seventeenth-century workshops would have been able to produce copies after Holbein. It seems likely that many of the copies were made by artists who had access to the original Holbein painting (or direct patterns from the original) as the features and proportions of the figures are often matched with considerable exactitude.

For example, the National Portrait Gallery portrait of William seems to have been made using a pattern traced from Holbein's original painting of Warham, now at the Musée du Louvre, Paris. It is heavily underdrawn which implies careful preparation. Although some of the underdrawing is visible in normal light, it is clearer in the infrared reflectogram pictured above. The bold definite lines indicate strengthening of the line over an initial tracing.

The drawing in the face shows features and wrinkles along with hatching that indicates shading. There are also freehand marks that appear less rigid to the original construction. 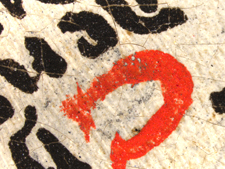 This magnified image showing a detail of the lettering on the book reveals underdrawing for the letters. 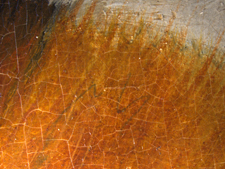 Underdrawing can also been seen in this detail of the fur cuff.