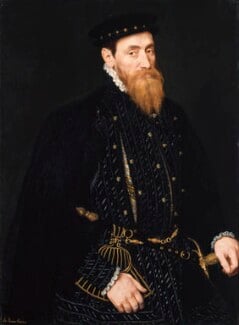 Sir Thomas Gresham (c.1518-79) was an important international merchant and the founder of the Royal Exchange. This three-quarter-length portrait shows him in middle age, in the years directly following the death of his only son.

Gresham divided his time between England and the highly influential international trading city of Antwerp. The style of this portrait indicates that it was made in the Netherlands, or by a Netherlandish artist in England.

Question 1: What changes have been made to the composition?

Several changes made to this portrait tell us about artistic practice at this date, but also about how patrons themselves may have requested alterations to the composition. 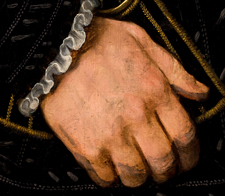 In this portrait of Thomas Gresham, changes in composition have been made at various points during the painting process. Changes that can be seen when examining the surface can be supported by scientific techniques like infrared reflectography and x-ray. In this painting changes were made to the hands, the buttons on the coat and the hat when the painting of the costume was well advanced. Because the changes were made at a late stage and were thinly painted, they have now become partly evident on the surface, as seen in this detail showing the hand with repainted fingers.

Photomicrograph of painted out button

The detail shows how the artist extended the fingers over the already painted black purse. This change ensured that the hand appeared more relaxed and the grasp on the purse was less tight. It is possible that Gresham himself may have been responsible for suggesting this change. As one of the most important financiers in England, he may have wished to appear less avaricious. 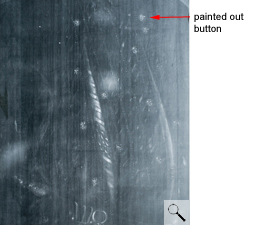 x-ray detail of the coat

In this magnified surface image you can see the detail of a button that was painted out at a later stage during the painting of the portrait. The original button has become partially visible over time due to abrasion of the panel's surface. The painted out button can be seen more clearly in x-ray. 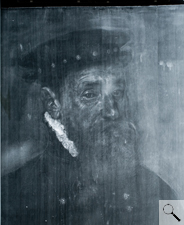 Changes were also made to the outline of the hat. These have become clearer using x-ray. The angle of the hat has changed and it is now higher than originally planned. 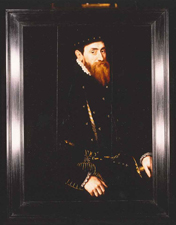 Interestingly, the changes made to the hand and the button can also be found in another image of Sir Thomas Gresham owned by the Mercers' Company, London. As these changes were made to both portraits at a late stage of painting, the conclusion can be drawn that both images were probably painted in the same workshop at the same time. A tracing of the National Portrait Gallery version showed that the outline of the figure at the Mercers' Company is almost identical in all areas, which suggests that a pattern was used. This finding is significant because it indicates that sixteenth-century patrons occasionally commissioned two identical portraits from the same painter at the same time.

Question 2: What do we know about the painting style and the use of pigments?

This portrait is thinly painted with fine blending, and fluid brushstrokes, which can most clearly be seen in the face and beard. The beard is skilfully painted with a subtle blend of different colours: blacks, browns, reds and yellows have been applied over a thin brown layer to create texture. 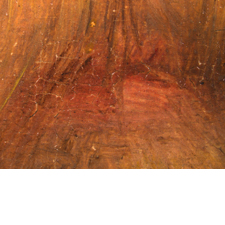 Scratches in the paint layer creating texture in the facial hair are also evident in the x-ray. The paint for the moustache has been blended by dragging it down over the mouth. Paint using the pigment lead tin yellow was applied at a late stage of painting, on the details of the costume, particularly in the sword and dagger hilts, purse, belt and chain. 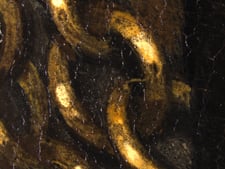 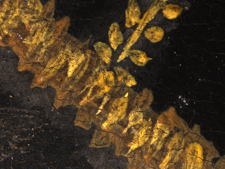 Photomicrograph of the edging on the purse showing the use of different shades of lead tin yellow. 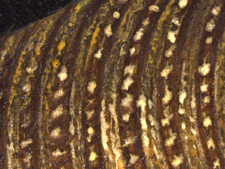 Photomicrograph of the decoration on the sword hilt showing use of different shades of lead tin yellow. 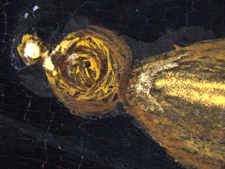 Photomicrograph of clasp on belt showing grey underlayer and use of different shades of lead-tin yellow.

Question 3: What is the date of the wood panel and how was it constructed?

Thomas Gresham's portrait is in extremely good condition. It is made from three boards of Baltic oak of roughly equal size which was reasonably standard practice and meant that the panel joins avoided running through the face. 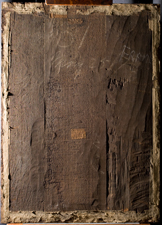 The process of dendrochronology examines the tree rings of the wood of a panel to gain details of the earliest felling dates for the wood. It can also sometimes be used to discover where the tree originally came from. This technique takes advantage of the annual nature of tree growth, with a new layer of wood produced under the bark each year. Tree rings vary according to the surrounding conditions and are influenced by factors such as climate.

The vertically joined boards were considered from left to right and lettered A, B and C. Board A has a last tree ring date of 1538 and board B of 1518. This places the conjectural date for the use of this panel to between 1546 and 1578. As the portrait can be dated both historically and stylistically to c.1565, this confirms our existing knowledge.