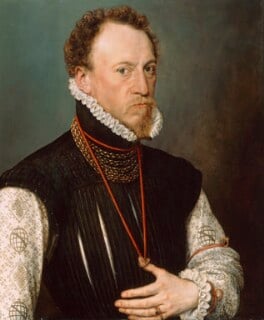 This portrait depicts the courtier Sir Henry Lee (1533-1611), a favourite of Queen Elizabeth I. Within his long and prosperous lifetime he was both organiser and champion of the Accession Day tilts (chivalric events held in honour of the Queen).

The portrait is painted by Anthonis Mor (1516-75/6), one of the most important and accomplished artists working in Europe. It is signed ‘Antonis Mor/ Pingebat [painted it], 1568'. It is likely that it was painted during Lee's visit to Antwerp in June 1568. Lee is shown in an unusual pose with his thumb through a ring held on a red cord that hangs around his neck. Two other rings are sewn on to two red cords tied to his left arm and wrist. The symbolic meaning of the gesture and rings remains ambiguous, however, they perhaps serve as a declaration of love, friendship or allegiance. Henry Lee is also dressed in the colours favoured by Elizabeth I (red, black, gold and white). His sleeves also include emblems in use by the Queen (armillary spheres and lover's knots) which would have been recognised as a compliment to the queen.

What can we learn about Mor’s technique?

What is significant about the change in composition?

What do we know about the decoration?

What is unusual about the panel construction?

Question 1: What can we learn about Mor's technique? 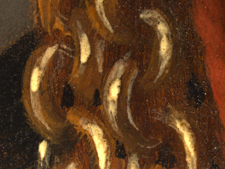 Photomicrograph of the gold chain showing the layers and feathering created by dragging through the wet paint.

The high level of skill of the painter Anthonis Mor is evident throughout this portrait. The use of very fine brushwork and attention to detail are complemented by an exceptionally well planned composition which allowed Mor to paint quickly and confidently. Although thinly painted, Mor uses complex layers to create depth and graduations of tone.

In some areas the first layer of paint is left visible for tonal effect. The artist's sophisticated technique includes some scoring into wet paint in the hair and dragging of wet paint into the collar and cuff highlights with a stiff pointed brush. 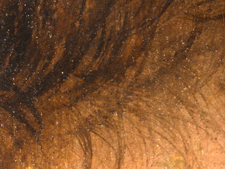 Photomicrograph of the hairline showing the use of ‘wet in wet’ blending to create texture. 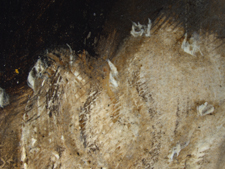 Photomicrograph of the edge of the cuff showing the blending and feathering of paint and exposed priming layer.

As with other portraits by Mor, the background is painted particularly well, with a clever use of paint layering with extremely subtle graduations that create an illusion of space.

Question 2: What is significant about the change in composition?

An interesting alteration has been made to the thumb of Sir Henry Lee's left hand. It has been extended through the ring to give greater emphasis to the downward pull on the cord. When examined closely the tip of the thumb now appears a little out of proportion. 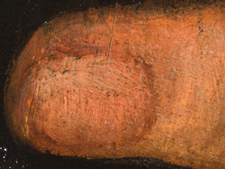 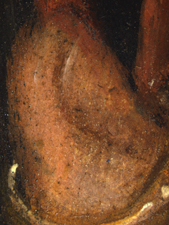 This highlights the sense that this particular pose must have had a specific meaning for Lee, perhaps as a sign of fidelity or friendship. A portrait with a similar pose of Lee's travel companion Edward, 3rd Lord Windsor (private collection) clearly copies the pose and style of Lee's portrait. The existence of this other portrait with the same gesture might indicate that the gesture relates to a sign of fellowship or membership of a society.

Question 3: What do we know about the decoration? 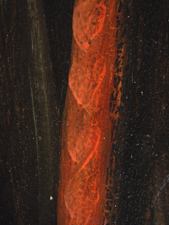 Photomicrograph detail of the red cord

The complex symbolism, using armillary spheres, lover's knots and curiously positioned rings, remains hard to interpret. Further research may help to uncover some of the meanings of this image.

This photomicrograph detail of the red cord (right) shows the different shades of red used. The colour may signify passion or strength of emotion.

The armillary spheres were emblems used by Elizabeth I and were regarded as signs of heavenly wisdom and knowledge. The lover's knots are considered indicative of a romantic relationship. Both these symbols can be found on the sleeves of Lee's costume (see details below). 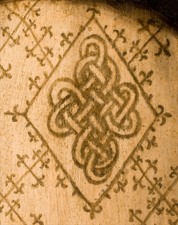 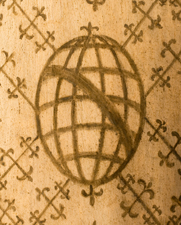 How was the pattern painted? 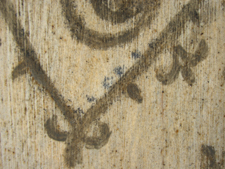 Photomicrograph of the patterned sleeve showing the visible underdrawing.

The pattern has been extremely carefully planned and recent technical analysis has indicated that Antonis Mor used a transfer technique called pouncing whereby charcoal dust is shaken through pricked holes to mark out a design. On the sitter's right sleeve there is a short row of dots at the inner edge around and within the same pattern of the lover's knot. These dots were used to help transfer the pattern.

The rings in this portrait may be interpreted as symbolic of a bond of some kind. There are six rings in total. Below are microscopic details of four of them: 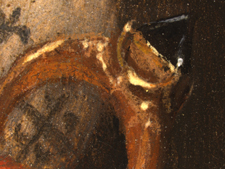 Photomicrograph of jewelled ring on sleeve 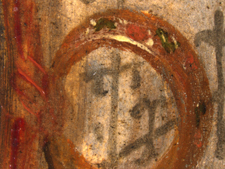 Photomicrograph of ring on cuff of proper sleeve showing the stitches used to keep the ring in place. 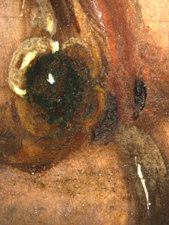 Photomicrograph of rings on fingers with residues of degraded varnish 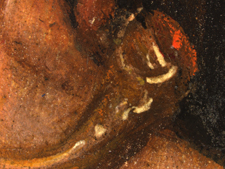 Question 4: What is unusual about the panel construction?

The panel of the portrait of Sir Henry Lee is constructed from two vertically joined boards of Baltic oak (the right panel wider than the left). The join of the two boards runs through Lee's head to the left of his features. This is an unusual decision as in raking light the join slightly mars the features of the sitter. The wood used for the panel's construction is also not of the highest quality and has two knots in it, which can be seen on the reverse of the portrait in normal light, and in x-ray, both of which are shown below. 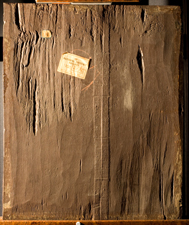 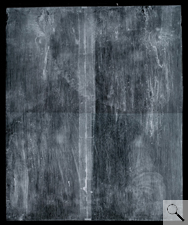 The same knot can be seen on both boards, which tells us that both sections of the panel were taken from the same piece of wood. The date for the last tree ring was 1550, which left 18 years for the panel to be put to use.