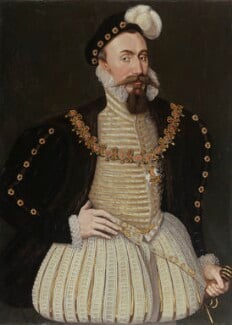 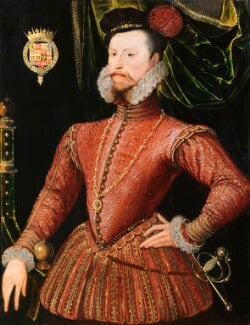 These two portraits depict Elizabeth I’s great favourite, Robert Dudley (1532/3-1588) 1stEarl of Leicester. Following Elizabeth I’s accession to the throne in 1558, Robert Dudley enjoyed an unparalleled hold over the Queen’s affections, which brought him titles, fame and power. As such, there was a strong demand for his portrait by those people who wished to demonstrate their social or political attachment to this highly influential member of the Court. The first portrait of Dudley depicted here (NPG 247) can be seen as typical of the various copies and versions that were produced by painters in order to meet the demand for Dudley’s portrait, and an almost identical version of this portrait survives in the collection at Hatfield House in Hertfordshire, evidence that it was of a type that was widely disseminated.

While Dudley never succeeded in his aim of obtaining Elizabeth’s hand in marriage, he was considered to be the queen’s only serious English suitor and often used portraiture as a means by which to further his cause. The second portrait of Dudley seen here (NPG 447), not only gives a good sense of Dudley’s standing and sophistication, it also lends itself to being hung alongside another portrait as a pair, possibly a ‘pendant’ portrait of the queen. It has been suggested that NPG 447 can be associated with a visit that Elizabeth made to Dudley’s home at Kenliworth Castle in 1575, and was part of a series of pictures commissioned specifically for the event.

Considered side by side, these two portraits can be seen to represent the two major motivations for the production of Dudley’s portrait. Moreover, new technical analysis has done much to further our understanding of how these portraits were made, where they originally came from and what they looked like when they were first painted.

When were these portraits painted?

What evidence is there for underdrawing in the portraits?

What techniques were used in the painting of these portraits?

When were these portraits painted?

Dendrochronology (tree-ring dating), has shown that the wood for the panel used in the portrait of Leicester in a red suit (NPG 447) was felled at some point between 1568 and 1579, which supports the idea that this painting was produced around the time that Elizabeth I came to visit Robert Dudley at Kenliworth Castle in Warwickshire. The wood is Eastern Baltic oak and makes up a three-board panel, which appears to have been significantly trimmed along the lower edge. It is therefore possible that this painting was originally a full-length portrait. It may in fact be the same picture from the Earl of Leicester’s own collection which was described as of ‘whole proportion,... in a sute of russet satten and velvet welted’, which could have been cut down at a later date to its present size.

The portrait of Leicester in a white and gold doublet (NPG 227) is also comprised of a three-board panel made from Eastern Baltic oak. The available tree-ring data provided a conjectural usage date of 1564-1596 for the panel, which supports a date of c.1575-80 for the portrait.

What evidence is there for underdrawing in the portraits? 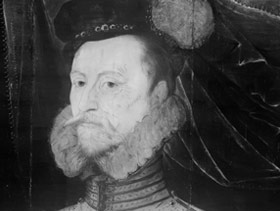 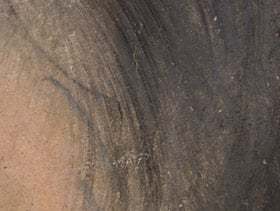 Detail showing areas in the face with exposed the underdrawing (NPG 447).

The composition of the portrait of Leicester in red (NPG 447) was first laid out through the use of underdrawing, applied using a tracing and probably derived from a pre-prepared drawing. Once transferred, the tracing could be reinforced or developed by the artist working freehand in a wet medium. This had the benefit of allowing the artist to build up areas of shadow and detail. NPG 447 displays the use of both traced and freehand underdrawing, which can be seen can be seen most clearly by using infrared reflectography, and also in areas of the face where the thinning of the flesh paint has further exposed lower layers of the painting’s surface.

In contrast, the portrait of Leicester in white and gold (NPG 247) has little evidence of underdrawing, despite the fact that the painting is clearly produced from a pre-established pattern. Infrared reflectography identified one faint, curved line in the eye on the left, which suggests that the principal features were drawn, and then very closely followed with the paint above, thus obscuring the initial preparatory drawing

Because underdrawing is often associated with the transfer processes used in the production of copies in this period, it might seem strange that there is abundant evidence of underdrawing in NPG 447 compared to the limited visible underdrawing in NPG 247. However, this seems to be precisely because the artist responsible for painting NPG 247 was so dependant on the pattern for establishing the composition. Conversely, while the extensive underdrawing in NPG 447 might at first suggest that the composition was copied from a pre-existing pattern, the freehand underdrawing which was undertaken after the initial tracing was made (as seen in areas of the hands and Dudley’s ruff) relates that the artist had both the confidence and the ability to elaborate upon the preliminary tracing.

What techniques were used in the painting of these portraits?

A comparison of the depiction of costume by these two artists throws the differences in their technique into sharp relief. In the portrait of Leicester wearing an elaborate yellow and white doublet covered in gold buttons (NPG 247), analysis of the surface of the painting has shown that the artist was remarkably economical in his application of paint, and used simple techniques in order to create shadow and model the features of the sitter. For example, in order to create shadow on the hand on the right-hand side of the doublet, the dark first layer for the sleeves and fur was extended into the reserve left for the doublet, before the grey doublet paint was applied. The grey paint was then painted over this dark layer. 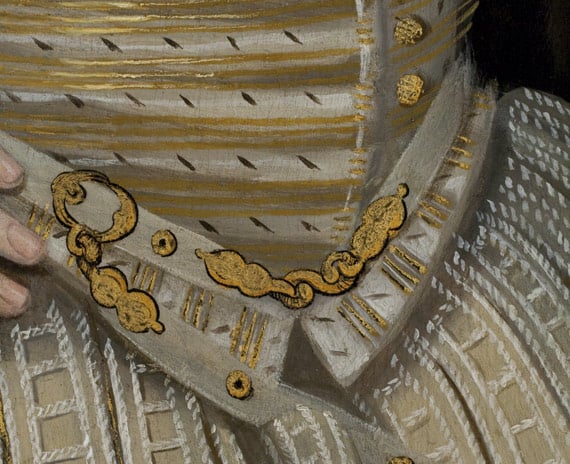 A similar technique was used for the feathers on the hat where a thin grey layer was painted onto the reserve and a darker layer applied around the edge of the reserve to create the shadow part of the feather. The light details were then applied over the grey edge to give depth and modeling.

What is most unusual about the painting of the costume in this portrait of Leicester (NPG 247) is the use of gilding, a technique that was becoming increasingly unfashionable during the period. The gilding on the left of the doublet was applied over a dark mordant (the fixant) which contained a high proportion of black. There is no gilding on the gold lines on the right side of the doublet, which are painted simply with yellow paint over the grey paint, with lead-tin yellow used for highlights. However, surface examination suggests that these areas were originally finely gilded, using only the dark yellow paint as a mordant. The gold clearly did not stick well in these areas, and lead-tin yellow was then used above to create the highlight. 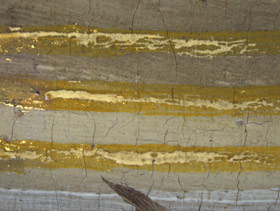 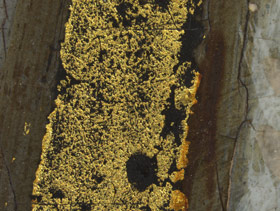 When compared to these rather simple techniques, those employed in the painting of the costume of the portrait of Leicester in red (NPG 447) appear even more sophisticated. Throughout, the paint handling and technique was of a very high quality, with very skilful and subtle layers of opaque and transparent glazes. The sleeves, doublet and hose were begun with a layer of white or pale pink paint over the priming layer, which was painted with a broad stiff brush, allowing individual brush marks to remain visible on the surface to add texture. A thin translucent layer of red lake was applied over the costume which the artist varied in tone so he could define areas of highlight and shadow. Another sophisticated technique was used to describe the texture of rich velvet in the hose, where paint was applied (probably with a brush) and then blotted off using either a cloth or fingers in order to remove some of the colour from the surface. Unlike the gilding which was used in NPG 247, the gold stitching in this portrait was described through the use of lead-tin yellow, which in some places was combined with red lead to give a warmer and more golden tone. 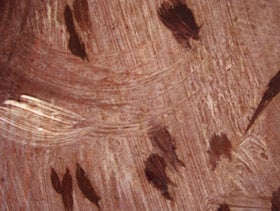 As it can be seen, although the two portraits depict the same sitter, they are different in a number of significant ways. The most important difference is that of quality, for while NPG 447 is a fine portrait which displays a variety of sophisticated painterly techniques, NPG 247 is not nearly as accomplished, and is painted in a simple and economical fashion. Together, they help illustrate the idea that there was a broad range in the quality of portraiture in this period, and that the demand for Leicester’s image ensured that there were a number of established patterns in circulation amongst artists.