The portrait
In greater detail
Beneath the surface
Structural changes

This highly unusual narrative portrait of Sir Henry Unton (c. 1558-1596) was commissioned as a posthumous commemoration of his life by his widow, Dorothy née Wroughton (d. 1634). At the heart of the composition is the portrait of Unton, flanked by figures of Fame and Death. He is surrounded by scenes from his life and death, starting in the lower right-hand corner and working anti-clockwise on the right-hand side of the composition. In each of the scenes the figure of Unton is touched by a ray of light from the sun on the right. Many of the inscriptions in the painting are now illegible, but the one on either side of the coat of arms in the lower-right section was recorded in the late eighteenth century, and once read:

This worthie and famous Gent. Sir Henry Unton was son unto Sir Ed. Unton, Knight. His grandfather was Sir Alexander Unton, and his greategrandfather was Sir Thomas Farrington; and also his mother the moste verteous Lady Ann Seimor, Countes Warwick, eldest daughter to the Lord Ed. Seimor, Duke of Somerset, ouncle to Kinge Ed. and soe protector of his persone and ye relm. Her ouncles were Thomas and Henry Seimor, which Thomas was Lord Admiral of England, and married unto Katherine Parr, last wife of Kinge Henry The Eigth. Her mother was Duches of Somerset; her aunte was the Lady Jane Seimore, Queen of England.

In the lower right Unton is depicted as an infant in the arms of his mother, Anne Seymour, formerly Countess of Warwick, at the Unton house of Ascott-under-Wychwood (Fig. 1). He is then shown studying at Oriel College, Oxford, where he took his degree in 1573 (Fig. 2), before travelling beyond the Alps to Venice and Padua (Fig. 3). He served with the Earl of Leicester on campaign in the Netherlands in 1586, and in the portrait Nijmegen is shown in the distance behind the military encampment (Fig. 4). Unton acted as resident ambassador to France in 1591-2, and then again in 1595-6, when he attempted unsuccessfully to avert a peace treaty between France and Spain (Fig. 5). He accompanied Henry IV to the siege of Spanish forces at La Fère, where he fell dangerously ill and was attended to by the French king’s physician (Fig. 6). He died on 23 March 1596. His body was taken back to England across the Channel in a black ship and the painting also depicts the hearse on its way back to his home at Wadley House, Faringdon, near Oxford (Fig. 7). 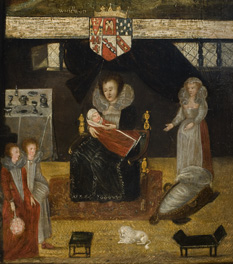 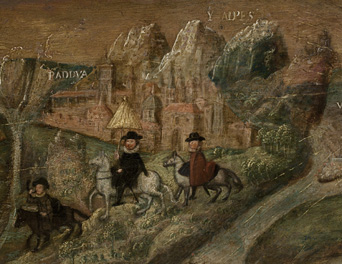 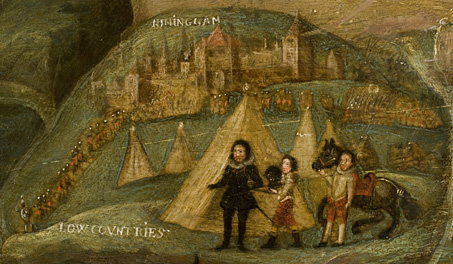 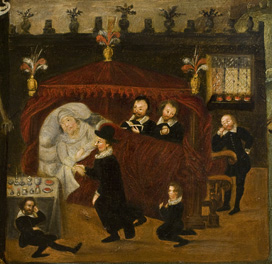 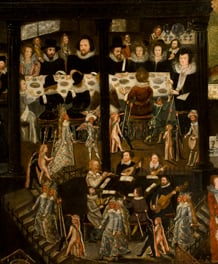 From the house his funeral procession leads past a group of the poor and the lame lamenting his death, and on to All Saint’s Church, Faringdon, where his funeral was held 8 July 1596, and where his tomb monument is shown in the foreground with Unton’s recumbent effigy and the kneeling figure of his widow (Fig. 8).

The scenes in the centre of the right-hand side of the composition show Unton’s life at Wadley House; he is depicted sitting in his study, making music, and presiding over a banquet while a masque of Mercury and Diana is performed (Fig. 9).

As part of the recent technical analysis the painting has been extensively photographed and the images have provided more information about the details of the composition. For example, the jewelled cameo that Unton wears on a chain around his neck had been thought to depict Elizabeth I. However, closer inspection, and comparison with other images, such as the cameo of Elizabeth included in a portrait of Sir Francis Walsingham, suggests that it instead depicts Henry IV (Figs. 10-12). It is recorded in the state papers that Unton gave a miniature of Elizabeth to the French king, and the cameo is the kind of gift that Unton could have received in return. 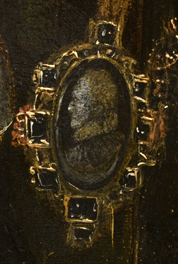 Fig. 10. Detail of the cameo in the portrait of Henry Unton, probably showing Henry IV of France

Fig. 11. Detail of the cameo of Elizabeth I in a portrait of Sir Francis Walsingham, NPG 1807 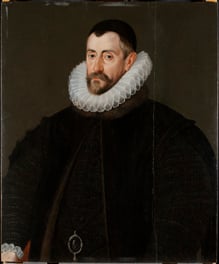 Photomicrographs also reveal the attention paid by the artist to the smallest details of figures and narrative features (Figs. 13-15).

Figs. 13-15. Photomicrograph details of the dog in the lower right, the figure of Unton in his study, and the black ship that carried his body back to England.

X-radiography and infrared reflectography are analytical techniques that provide information about changes that were made to the composition during the painting’s execution. In this case they revealed a number of small changes; for example, the room beneath the musicians originally featured a colonnade, but it was altered to show a room with figures seated at a table (Figs. 16 and 17). 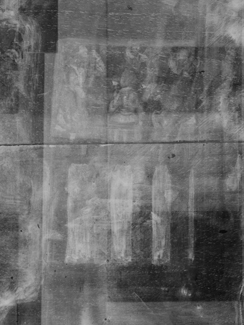 Fig. 16. Detail from the x-ray mosaic showing the colonnade that was originally painted in the room beneath the musicians 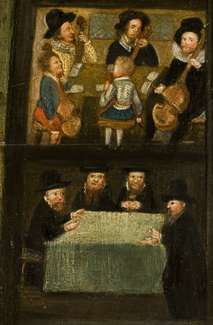 Fig. 17. Detail from the painting showing the seated figures in the lower room.

The plaques with text on have also been extended, and the lower part of Unton’s sleeve on the right side of the central portrait has been shortened so that an extra figure could be added to the group mourning beneath the plaques. Infrared reflectography also revealed that many more black birds were initially painted both in and above the trees, and these were then painted over (Figs. 18 and 19). 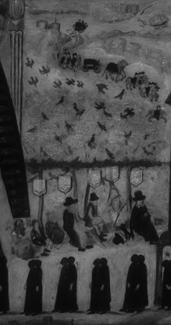 Fig. 18. Infrared reflectogram mosaic detail showing the extensions to the plaques, the shortening of Unton’s sleeve, and the numerous birds in the trees. 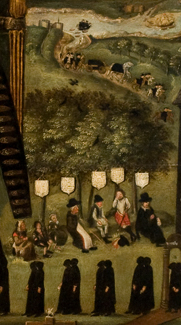 Fig. 19. Detail from the painting showing the final surface of the same area.

Infrared reflectography also reveals a small figure on horseback on a hill behind the depiction of the military encampment near Nijmegen, which was painted out. There is possibly a small boat at the confluence of the rivers by the camp that is not evident on the surface either (Fig. 20). 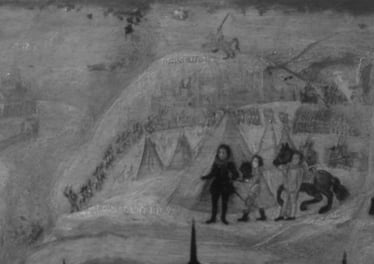 Fig. 20. Infrared reflectogram mosaic detail showing the painted out figure on horseback in the centre at the top, and the small boat in the river at the lower left. 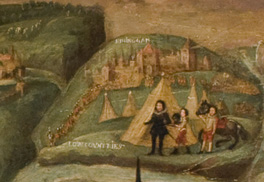 Fig. 21. Detail from the painting showing the final surface of
the same area

Perhaps most interestingly, technical analysis revealed that the structure of the painting had been substantially altered at an early point. The panel is constructed from three horizontal boards: the top two are possibly made of walnut, and the lowest board is possibly oak. The panel cannot be conclusively examined due to the construction of the early frame. However, the evidence suggests that the lower board is a later addition, and this was confirmed through paint sampling, surface examination, and x-radiography. Paint sampling showed that the priming on the upper two boards is pale grey, whilst that on the lower board is a much darker grey. The paint handling along the bottom board also differs slightly from that used in the rest of the painting; it has a more fluid appearance with pronounced drying cracks and the details are handled in a simpler manner. This is clearly evident when comparing images of the figures from the two sections of the composition (Figs. 22 and 23). 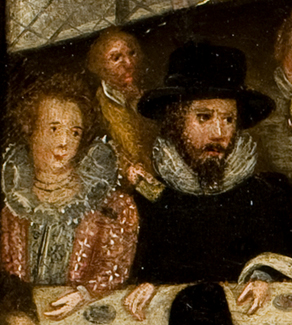 Fig. 22. Detail from the dining scene at Wadley (part of the original composition).

Fig. 23. Detail of figure by an archway, beneath the masque scene (later addition).

X-radiography also showed differences between the lower board and the other two boards. The edges of the upper two boards had dowels inserted at regular intervals, which suggests that at some point the painting was affixed to another structure, possibly as an inset in some panelling. By contrast the lower board only had three dowels at very irregular intervals, which are difficult to interpret (Figs. 24).

Fig. 24. X-ray mosaic of the whole painting with panel join to lowest board marked, as well as dowels and unfinished painted areas at the edges of the upper two boards. 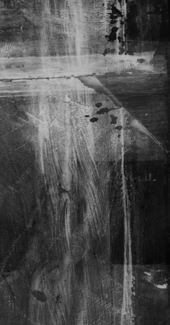 Fig. 25 X-ray detail showing the lettering on the far-right of the composition, and the unfinished outer right edge

The paint layers on the outer edges of the upper two boards are also very thin, which suggests that they were originally left unfinished when the painting was secured into some form of framework. Some very faint lettering is evident on the far right of the composition, above Unton’s depiction as an infant but this does not seem to have been worked up in the final composition (Fig. 25).

Taken together this new information suggests that the painting may originally have formed part of another structure. It is possible that it was placed within a temporary memorial in Faringdon Church whilst Unton’s stone tomb was being constructed, and was then removed and extended for display in a different location, perhaps Dorothy Wroughton's home at Wadley when the tomb was completed in 1606. The tomb was destroyed during the Civil War, and only the figure of Unton's wife survives, along with a reconstructed wall monument featuring an inscription and two Corinthian columns. The memorial portrait must have been a portable painting at the time of Dorothy Wroughton’s death because her will, dated 18 July 1634, notes that she left to Sir Robert Pye ‘all my story pictures ... unless the Picture of Sir Henry Unton, which I do give and bequeath to my loving niece the Lady Dering’.

Fig. 26. Digital reconstruction of how the painting may first have appeared, with the lowest board removed and the outer edges covered.

The changes to the structure of the painting have also influenced the conservation approaches adopted by the Gallery since its acquisition in 1884. The Gallery’s first Director, Sir George Scharf, made a tracing of the painting as a record of the composition in the late nineteenth century(Fig. 27). This is a useful document, which in conjunction with photographic records has revealed information about the Gallery’s early conservation practices. On the far right-hand side, in the depiction of Oxford, Scharf’s tracing records only one tower. Although the edge of the painting is not clearly marked it is evident that Scharf recorded all of the details because another piece of tracing paper was attached in order to extend the surface and there would, therefore, be no reason to leave anything at the edges unrecorded. The edging also matches up with what is now known to be the main paint surface, rather than the thin paint layers in the strips on the edge.

However, it seems that at some point an extra tower was added to the scene. This is recorded in a photograph taken 2 January 1973 (Fig. 28), and also in an earlier glass negative from 16 October 1949 and so must have occurred at some point between the painting's acquisition in 1884 and 1949. There is a note on the tracing that the right-hand edge of the painting was ‘much injured’ and it seems that the decision was made to retouch the edge. Conservation practice in the 1970s was to remove such retouchings, and the extra tower was removed at some point between 1973 and 1982. 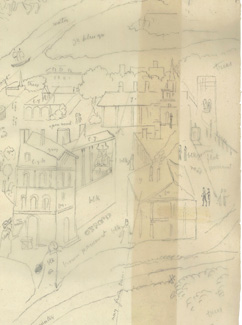 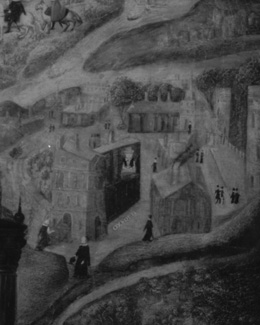 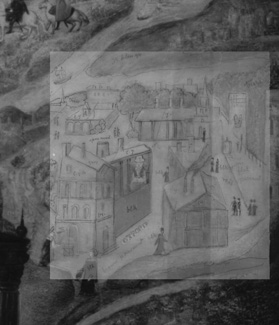 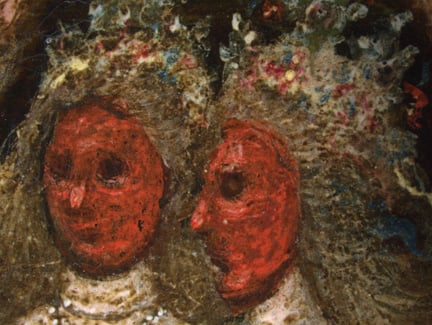 The ‘story picture’ of Sir Henry Unton provides a unique visual record of one man’s life in the late sixteenth century, and the rich detail has provided information to scholars researching subject areas as diverse as music, the masque, the domestic interior and ambassadorial life.