The Phoenix and the Pelican: two portraits of Elizabeth I, c.1575 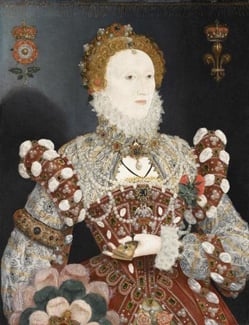 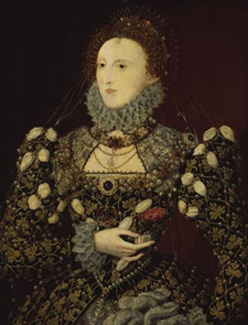 These two portraits of Elizabeth I (1533-1603), recently examined for Making Art in Tudor Britain were painted when the queen was in her early forties, almost half way through her reign. They show the queen wearing remarkable pendants at her breast: one depicting a phoenix and the other a pelican (see details shown below). 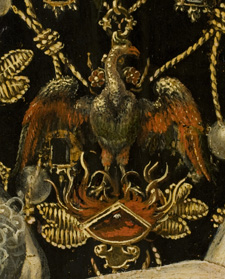 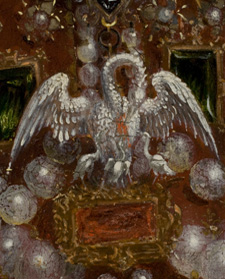 Both emblems were regularly employed by the queen. The face pattern used for these portraits is similar to a miniature of the queen by Nicholas Hilliard (1547-1619) (see image below). 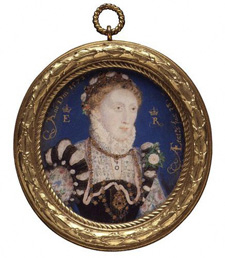 Elizabeth I by Nicholas Hilliard (NPG 108)

Scientific analysis undertaken in the last few weeks has revealed that the two portraits were painted within the same workshop. Tree-ring dating has shown that the wooden panels on which they were painted derive from wood from the same two oak trees. A tracing of the face pattern of the ‘Phoenix’ portrait matches the ‘Pelican’ portrait exactly (in reverse) so the artist has used the same original drawing in each picture. The portraits were probably painted at the same time, however the eyes, nose and mouth of the ‘Phoenix’ portrait were originally painted in a slightly lower position. This might indicate that the artist began with this picture and adapted the pattern during the painting process (see infra-red image below). 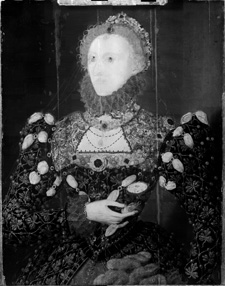 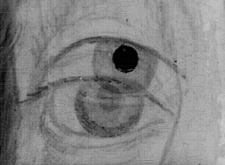 Infra-red reflectograms showing the change to the position of the eyes on the ‘Phoenix’ portrait (Image: Tager Stonor Richardson)

Both paintings have suffered from pigment fading and surface damage. The colours would once have been more vibrant. The difference in overall colour between the pictures is caused by yellowing varnishing on the ‘Phoenix’ and extensive cleaning of the ‘Pelican’ portrait.

It is likely that these portraits were painted either by or under the direction of Nicholas Hilliard. We know that Hilliard, who became the queen’s painter in 1570, painted large works in oil as well as the miniatures for which he is better known. There are stylistic similarities between these portraits and the miniatures by Hilliard, particularly the diagrammatic linear style and close attention to detail.

These magnified details show the similarity in technique used to paint the hair on Hilliard's miniature of Elizabeth I (watercolour on vellum, NPG 108) (1), the ‘Pelican' portrait (2) and the ‘Phoenix' portrait (3).

By the time this portrait was painted, the image of the Virgin Queen had developed and much of the symbolism in her portraits alluded to her unmarried status. The jewel at her breast in this portrait is a phoenix, a mythical bird symbolizing rebirth and chastity. It became associated with the queen in the 1570s as an emblem of virginity, uniqueness and as reassurance that she would be able to regenerate the dynasty. Elizabeth is shown holding a red rose, a symbol of the House of Tudor and she wears a heavy jewelled collar of a type worn by her father, King Henry VIII.

The changes to the eyes, mouth and nose evident beneath the paint surface may indicate that the artist began this portrait first.

The queen's appearance at this time was increasingly magnificent and these portraits depict her wearing particularly elaborate clothes and jewellery. She is shown here wearing a highly decorated armlet above her elbow and has many jewels all over her red velvet gown and headdress. The pelican jewel at her breast represents self-sacrifice, as a pelican was said to draw blood from its own breast to feed its young. It alludes to Elizabeth's role as mother to the nation. The two cherries tucked into her right ear probably refer to her virginity (her 'cherry' remains intact). She is shown standing under a fringed canopy, suggesting that she is enthroned.

The recent analysis has found that the current blue background is an under layer and that the painting would originally have had a dark reddish purple background.

One of Hilliard's earliest known miniatures of Elizabeth, this represents a prototype of an idealised portrait of a reigning queen. It may be the one he describes painting in his treatise, The Art of Limning, for which she sat in 'the open alley of a goodly garden'. According to Hilliard, Elizabeth preferred to be painted without shadow so she chose to be painted outdoors to help create such an effect.

The two reproductions below show enlarged details of the face and costume providing a sense of Hilliard's intricate technique. 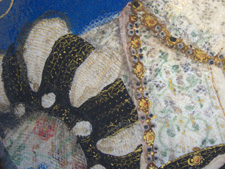 Magnified details of the miniature