Henry VIII and versions of the non-Holbein portraits 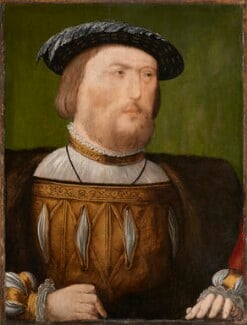 A group of non-Holbein portraits of Henry VIII were examined, two belonging to the National Portrait Gallery and one from the collection of the Society of Antiquaries, London (Scharf XXXIV, Museum No. 333). Examination of these works has allowed investigation into how paintings of a particular portrait type were made and, as well as contributing to the wider mass of accumulated data, has allowed very direct local comparisons to be drawn.

Very particular techniques were noticed across all three paintings, including specific ways of applying paint and uses of varied paint consistencies. Two of the paintings (NPG 1376 and the Society of Antiquaries version) are very similar in appearance.  Microscopic examination of these showed detailed technical characteristics which suggest they might have been produced in the same workshop and at least some parts may even have been executed by the same person.

Similarities of composition were investigated by making tracings of the outlines of the two closest paintings. This showed the same pattern to have been used, scaled either up or down.  It would be informative to compare these tracings to other versions of the composition.

Similarities between the hands of the two NPG Henry VIII paintings show the use of patterns for sections other than the face, and also indicate how well-used these patterns were as a method of mass producing a certain type of image. 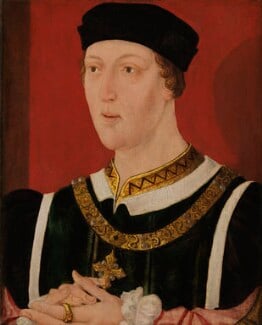 At the same time as these paintings of Henry VIII were investigated, two portraits of Henry VI, belonging to the Society of Antiquaries and the Government Art Collection, were examined and compared to the version owned by the National Portrait Gallery. Tracings of these found that the same pattern had been used for all three, although the paintings have different surface appearances.  The systematic and simple structure of the layers in all three is the same, but the handling of the paint – also seen in x-ray images - varies. It was concluded that the three paintings could originate from the same workshop, but are certainly by different hands. By contrast, the x-rays of the two very similar Henry VIII portraits – possibly painted by the same person - show very similar handling and support the other findings.

As a result of examining this group of paintings, certain features and other characteristic techniques can now be observed in other paintings. As more data is gathered they can be viewed together as versions of certain portraits type, created through the use of the same techniques and widely used patterns.