A meaningful examination of the painting surfaces and samples of paint, and proper interpretation of the methods and materials of Tudor paintings should be related to a good understanding of the supplies of materials, the economic and social circumstances of the artist and purpose of the artist, as well as the intended function or destination of the painting. In examining after-Holbein works it is only possible to guess at a few of these key matters, but findings on the paintings themselves are providing evidence – some parts of the jigsaw – with which to build an idea of the different approaches to picture making. This study focused on varying manners of painting backgrounds in a selection of paintings.

The portrait of William Warham is in relatively good condition, and has retained a particularly bright green depiction of damask drapery which forms the background. How was this convincing representation of dark and light, as well as rough and smooth texture constructed? Traditional early oil painting methods relied on building up the paint in several opaque layers, highlighting the lights and using pure, dark glazes in the darker areas, a complex method apparently employed by Holbein for the similar type of green brocade of The Ambassadors. 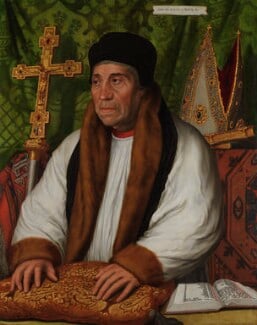 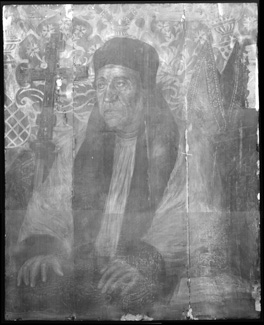 X-ray mosaic of the whole painting

An x-ray of Warham was surprising: it revealed the very reverse of what one might expect. The dark green areas appear light in x-ray (showing a high lead content), while the brighter, lighter areas appear dark in x-ray. A simple painting system of underlayering explains this. The panel was covered with the normal thick chalk ground then covered by a thin, off-white imprimatura. The darker, raised and roughly textured areas of green, representing the ‘brushed’ velvet, were underpainted with a little coarsely ground charcoal mixed into lumpy lead-tin yellow, a mixture which supplied both the texture and a base colour, before a glaze of translucent copper green was applied. The underlying mixture produced a dull greenish colour, as reconstructs of the colour demonstrated.

The lighter, brighter green colour, imitating the smooth velvet of the brocade, used the same translucent copper green glaze brushed directly onto the pale priming layer. These areas of green were given a wonderful luminosity by the off-white priming, which itself lies over the white chalk.

In the portrait of Thomas Cromwell a slightly different approach was used to create the tones and textures of the brocade: a thick and bulky layer of grey paint was laid in on the darks of the pattern, covered by a mixture of indigo and a little lead white; while in the light areas, a paler blue of indigo and additional lead white was laid in directly over the imprimatura. In this case the blue is not a glaze (as with the green of Warham) but a more solid indigo and white. However, this system reflects a similar type of tonal and textural underpainting as that of Warham. Such systems of undermodelling seem to have been employed with increasing frequency in the late sixteenth century.

The indigo of the background (where original) is a good colour: it seems likely to have been of good quality, and its use with yellow for the mixed green of the table should have set up a striking contrast between the bright green table and the dark blue of the background paint when first painted. However, the yellow lake is a much more fugitive organic pigment than the indigo and its disappearance from the upper layers (leaving only the indigo and white) has led to an imbalance in the colour composition of the painting.

Of course, good quality does not always result in longevity. Another portrait with an indigo background, William Butts shows just how dramatically light can affect the colour: at some stage in its history it must have been subjected to great exposure of light.  The portraithas a perfectly preserved blue rim, protected from light by a frame, where an extraordinarily strong coloured indigo can still be seen and the intense blue background of the portrait when first complete can be conjectured. Sir Richard Southwell
after Hans Holbein the Younger
late 16th century, based on a work of 1536
NPG 4912 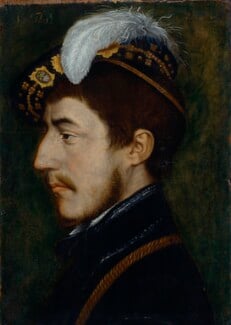 Even though the indigo backgrounds of other paintings were deteriorated, it has been possible to imagine the intended colour of the original, but it was not at all easy to guess at the early appearance of two more portraits. Samples of the background blue-green of Richard Southwell unexpectedly revealed that the pigment was the rarely encountered artificial azurite, blue verditer. Not an easy pigment to make, it was increasingly a substitute for azurite in the seventeenth century. Azurite seems to have become used less commonly for expanses of paint such as backgrounds and skies, with only the richest commissions employing the more expensive natural mineral blues.

However, the dark and patchy green background of the portrait of Sir Nicholas Poyntz, has just such a painted background. Azurite could be seen in the lower layers of a sample from the background, now heavily and mistakenly overpainted with a green mixture. It proves that the paint once would have been a gloriously bright blue colour providing a dramatic foil to the distinctive profile of the sitter.