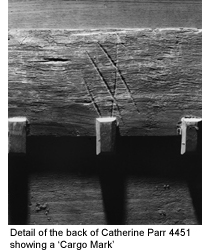 This talk gave an introduction to dendrochronological analysis as applied to archaeological remains, building timbers and art-historical artefacts in Britain. An overview of trade in oak timber during the medieval period, derived from this work, and linked to documentary and other sources was then presented. This overview showed that from the 13th century onwards Britain was importing large number of riven oak boards, initially from NW Germany and Ireland and from c. 1300 onwards from the eastern Baltic; from the area of present day Latvia, Lithuania, Estonia, and Poland.

This talk was given at an early stage in the Making Art in Tudor Britain project, with only about 20% of the expected number of panels investigated at this stage. The majority of the NPG's panel paintings of this date utilise oak boards derived from the eastern Baltic. The results of the dendrochronological examinations of course need to be integrated with the other technical and historical data but it is already clear that it has assisted in the identification of several panels that are evidently later than their present attribution, and also identified 2 panels on English sourced oak, which may indicate that they are local copies of standard images. Other technical differences between these groups of material should assist with the wider aims of the project.

Examination of the backs of the panels has, where the original surfaces have survived later remedial and conservation treatments, revealed evidence of the construction methods of the panels. These provide support for the current expectation that the boards were imported already split into larger boards. For example several retain toolmark evidence showing different processes in the preparation of the timbers such as splitting, sawing, and finishing with a 'shave'. Two panels have been located which retain scribed marks that appear to be cargo or merchant marks, on their original riven surfaces. Such marks have only rarely been identified on panel paintings. These are especially exciting and it is hoped that more may be revealed as the project proceeds.