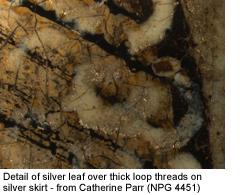 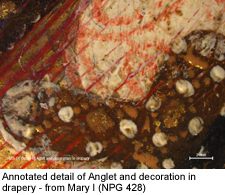 This talk presented some of the results of technical analysis on three royal portraits in the NPG collections; Mary I when princess, dated 1544 (NPG 428) Katherine Parr, c. 1545 (NPG 4451), both illustrated on introductory page to these abstracts (workshops 2) and Edward VI, c. 1547 (NPG 5511) illustrated below.

These portraits, all by an English painter, were produced in the artistic vacuum after Holbein's death in 1543, a time the artistic scene at court was largely dominated by foreign artists (particularly, Gwilliam Scrots who arrived in 1545). It is interesting to note that of the over thirty portraits currently catalogued as 1540s in NPG collections only around six appear to be by native artists. However, categorisation between English and Anglo Netherlandish gradually begins to break down from this date. Therefore why do we feel confident that these portraits are by English artists? Stylistically these pictures bear traits found in use in other products of English workshops such as a linear technique with hard edged lines, an exacting interest in decorative detail, sometimes at a cost to overall unity, a lack of fluidity to brush marks, extensive use of gilding, a composite approach to different parts of the image providing a sense that different parts of the painting worked on independently.

The portraits of Mary I and Katherine Parr, have long been considered to be stylistically to by same hand and have been associated with the artist, 'Master John' (fl. 1544-1550) about whom little is known. Mary I's portrait is linked to a payment for a portrait in November 1544 and recorded in the Privy Purse expenses of the Lady Mary: 'Item, pd to one John that drue her grace in a table' Yet this link is no way certain. There is no documentary record of payment for the Parr portrait and the picture was only recently re-identified as Katherine Parr in 1985. The pictures are certainly close in date and style, and dendrochronlogy results reveals that for Katherine Parr the wooden panel derives from a trees which cannot have been not felled before 1524, and for the panel used for Mary I from a tree not felled before 1523. The portraits of Katherine Parr and Mary I share the same use of sumptuous and expensive materials; silver and gold leaf, rich red glazes and a very similar high quality azurite pigment. In both paintings there is a pattern in the costume of very precise parallel lines, and there are thick white loops of thread with the remnants of silver leaf over them (see image above).

Analysis of the portrait of Edward VI (NPG 5511) proved extremely interesting and revealed that the picture was almost certainly painted immediately after Edward became king in 1547. The wood used for the wooden boards derives from three different trees not felled before 1530. This portrait is one of several similar versions produced at this time, although evidence from x-ray reveals it is not a direct copy of any of the existing images. These include an earlier more sophisticated three quarter length portrait held in the Royal Collections at Windsor Castle showing the King as prince by a Flemish artist, around 1546. Here the composition is different from the NPG picture as there is a pillar on the right and window on left with a landscape view. A full-length version similar to NPG 5511 exists at Petworth House, Sussex including the king's coat of arms and a landscape. 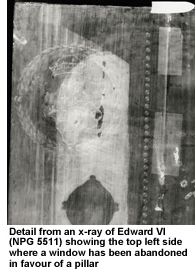 In the NPG Edward VI a number of changes have been made to the composition during the painting process. Significantly a window to the left (as in the royal collection version) has been abandoned in favour of a pillar allowing the presentation of the royal arms. In addition the legs have been widened probably to reflect the pose of Edward's father, Henry VIII in the mural by Hans Holbein once at Whitehall palace (see the Holbein Cartoon NPG 4027). The wide legged stance is not present in the Petworth version. It is likely that both the NPG and Petworth pictures were painted soon after Edward came to throne in February 1547. The NPG version shows evidence of an artist exploring a solution to presenting this portrait type not as the Prince of Wales but as King - with the addition the full length wide leg format, the canopy of state and the royal coat of arms. 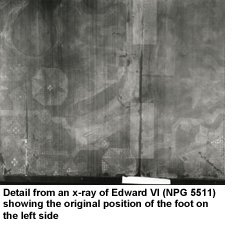 Although the structure of paint layers in Edward VI is very similar to Katherine Parr and Mary I, the variations in style and handling are distinct and this picture does not seem to be directly by the same artist. The orderly technique is similar in all three portraits, but several elements in the portrait of Edward VI can be compared in particular with the portrait of Parr. There is a very similar light blue priming layer (of white lead and azurite of a similar high quality) over the white chalk ground, but in the portrait of Mary I there is no priming layer over the chalk ground. The underdrawing in the portraits of Edward and Parr can be compared, and in both portraits red glaze over silver leaf is used in the costume. However damage to the facial features make it extremely difficult to assess the quality of authorship in the portrait of Edward and it is likely that it may be related to the same workshop Parr and Mary. It is particularly evident with the NPG Edward that there are numerous different artists at work on this panel. For example, the marbled architectural pillar to the left stands out as being painting by accomplished artist with awareness of, or training by continental practitioners. It is also highly probable that the costume and the figure are painted by different hands.

A fuller interpretation of the compositional changes of the Edward VI NPG 5511 probably relies on technical analysis on the Petworth portrait. These two portraits are by different artists both whom were almost certainly basing their compositions on the Royal collection version of Edward VI as prince, where the window does appears on the left. Unlike the royal collection version, the designs for both were apparently conceived as a full length from the outset. Yet other elements in the NPG version were less certain and during the design stage the background to the left side was radically changed. The technical analysis in this instance has shown how a process of trial and negotiation took place with this picture. It has revealed how the intentions of artists (and or patrons) were adjusted during the painting process in order to find representational solutions for the urgent problem of presenting a nine-year-old boy as a capable ruler with full regal authority.