Antonis Mor and the portrait of Thomas Gresham

The recent restoration of the Portraits of Sir Thomas Gresham and his wife Anne Fernely in the restoration studio of the Rijksmuseum in Amsterdam gave us not only a beautiful result but also helped us to gain more insight into the technique of Mor. The Rijksmuseum bought these two portraits from the Soviet Union in 1931 where they had been hung in the Hermitage since 1838. The paintings have not been restored in the Rijksmuseum until now. In 2007 yellowed varnish layers and vast and discoloured overpainting was removed, damages retouched and new varnish applied. The underdrawing was identified using infrared reflectography. The painting technique was studied with the naked eye and with a binocular microscope. Cross sections, taken from strategic locations, were grinded and studied with microscopy.

Mor was born in Utrecht in 1512 and died sometime before 1576 in Antwerp. He was a student of Jan van Scorel and in 1547 became a member of the Antwerp Saint Lucas Guild. He travelled to Italy and then to Spain and Portugal where he became court painter of King Charles V and his son King Philip II. In 1553-54 Mor was in England where he painted a portrait of Queen Mary I. He was also commissioned to paint her husband King Philip II of Spain. In 1559 he returned to Spain and the to the Netherlands in 1561, first to Brussels, then to his hometown Utrecht, finally settling again in Antwerp. Mor was one of the most famous portrait painters of his day and had a great influence on later generations of painters in the Netherlands.

In 1564 it was reported that Mor was in Antwerp portraying les Marchantsz. One of them was Thomas Gresham (1518-1579), merchant of the English crown in the Netherlands, financier, founder of the Royal Exchange and of Gresham College in London. Gresham, renowned for Gresham's law "Bad money drives out good money" was painted with his wife Lady Anne Fernely (c.1520-1596). Neither of the portraits are signed but the attribution to Mor is not doubted and dates from 1792.

In 1872 the paintings were restored by Alexander Sidorov: this is documented on the back of the portrait of Anne Fernely. In Cyrillic writing it is stated that the painting was transferred from wood to canvas. This explains why on the surface of the painting typical craquelures of a panel painting as well as the knots of a canvas can been seen. Alexander and his two brothers Nicolai and Mikhail were famous for such treatments that must have been carried out to stabilize paintings with flaking paint or curved panels. Between 1860 and 1865 Alexander Sidorov transferred 51 paintings from wood to canvas and relined hundreds of canvas paintings. The condition of Gresham's portrait must have been more stable as this panel was only cradled. The stripped state of Fernely's portrait (2007) indicates indeed some history of flaking paint but by far not enough to even consider such an intrusive treatment nowadays.

The panels each consist of three planks and are radially cut oak. Most likely in restoration previous to 1872 the paintings had been made smaller. Originally probably the same size, Lady Fernely's portrait is now smaller than her husband's portrait. Three sides of the Gresham portrait have been trimmed, the right side still shows some bevelling but this is not seen on the left side. The left side has possibly been trimmed the most and this correlates with the width of the 3 planks. 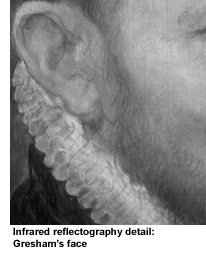 With infrared reflectography a cursory underdrawing is visible, executed in a dry material, probably black chalk. In the portrait of Thomas Gresham lines for the face, ear, eyes and nose and cheek are present, they appear to have been placed with care to define the facial features accurately. The ruff on the collar is indicated with a quickly drawn sinuous line. This shows strong resemblance to the way Joachim Beuckelaer prepared such motifs. Van Mander mentions that Beuckelaer painted clothing for Mor. Although Bruyn in his Oud Holland article (113 (1999), 107-136, pp. 125-126) argues that this concerns Joachim's brother Huybrecht, it indicates that comparable conventions existed in Antwerp workshops.

In Gresham's black clothing no underdrawing could be detected. The lighter parts of the painting, such as the chair and hands, show quickly drawn lines that merely indicate the forms. Only a little hatching was used to prepare for the light/dark modelling: this can be seen for instance on the forehead and the knuckles of the hand. Lady Fernely's portrait shows slightly less underdrawing and few lines are detectable in the face, the headdress, the hands and in the lighter parts of the clothing. Hatching is hardly present there either.

While applying the paint layers, the underdrawing functioned as a guideline, but minor shifts and changes occurred in both paintings. The ruff on Gresham's collar for example was painted somewhat lower, and the back of the chair closer to the edge of the painting in the final version. In Lady Fernely's portrait the headdress and neckline were slightly adjusted, as were the folds in her sleeves and the chair's armrest. During the painting process itself small corrections appeared also: for example in Gresham's hat and jacket. The fingers and thumb of Lady Fernely's right hand were elongated in paint, thus accomplishing a more elegant appearance of the hand.

The build-up of the painting is rather straight-forward. The face of Gresham is reserved in the background and where the reserve was too wide it has been closed (retouched) very neatly. By grace of a small unpainted top layer in Mor's layering one can see the so called deadcolouring: the cuff of Gresham's right shirt sleeve is formed in the same way as in the final painting with deadcolouring. Under the nostril of Gresham a touch of deep red is exposed. Like other painters of his time Mor used this trick to create volume and depth in the execution of the incarnate. 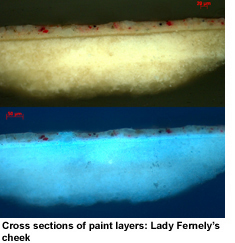 Cross sections give more insight to the build-up of the fleshtones. On top of a white imprimatura there are two layers of leadwhite and vermillion (as well as a touch of black for the male portrait). A sample taken from a shadow area in the fleshtone of Lady Fernely's cheek shows leadwhite mixed with organic red lake and vermillion and also umber and charcoal used as a scumble. These scumbles in the fleshtones are greyish and create a translucent effect.

Shadows and highlights in the black textile draperies in Gresham's suit are worked wet in wet in swift touches of darker and lighter zones. A slight addition of an organic red lake to the mixture of lead white and black serve to achieve a warmer tonality. Some of the darker touches are weaved into the lighter zones and vice versa. It looks as this is done with a comb or special brush.

A sample taken from the green of the tassle on the chair shows verdigris and carbon black over a layer of earth pigments, leadwhite and black (the brown wood of the chair). The Norgate Miniatura manuscript mentions the recipe for the painting of the colours of several types of gemstones given by a certain Antiguary Sig Verstegan of Antwerpe. The emerald on the hand of Lady Fernely consists indeed of a copper containing pigment (Norgate mentions Verdigris) but in Gresham's sapphire stone the cheaper azurite is used instead of ultramarine.

In the XRF spectra of the samples taken from the portrait of Anne Fernely big peaks for Zinc are surprising. But this must be another Russian souvenir as the Sidorov brothers are known not only to have replaced supports of paintings, but also the preparation layers.

The results of the research into Mor's techniques produced no great surprises but restoration has given these pictures a highly visible new lease of life. They are to now hang in the New Rijksmuseum. The restoration may also still serve as a very useful reference within the National Portrait Gallery's research project into Tudor and Jacobean painting techniques.