This paper considered various ways of charting the characteristics of a single artist's painting technique and explored the limitations of authorship-based technical analysis. Around 40 paintings are attributable to the Netherlandish artist Hans Eworth, mostly portraits in both public and private collections (see bibliography). Eworth arrived in England from Antwerp around 1545, by 1550 he had been granted letter of denization, he remained in England until his death in 1573. As well as being a designer for the office of the revels, Eworth also produced complex allegorical and religious works, some of which survive.[1] Four portraits signed or attributed to Hans Eworth are held by or on loan to the National Portrait Gallery. Recent technical analysis on this group revealed that these works are painted in a very similar highly skilled economical technique, and that Eworth's portraits were extremely carefully planned, probably making use of numerous preparatory drawings, which were then carefully transferred.

Although the technical evidence showed considerable similarities in technique and practice in this group of pictures, it is clear that cautious interpretation should be employed in linking groups of work in this way. Consideration of studio circumstances and the extent of the involvement by assistants, the cost charged by the studio as well as patron led initiatives influencing the composition would all have had an effect on the methods, techniques and materials employed, and the overall finish of the completed painting. However, this type of work still has the potential to help with the identification of the work of an individual artist and the assessment of the characteristics of national schools. In the wider context it can also help to establish the groundwork for both questioning processes of transmission between émigré and native artists, and ultimately in questioning categorisation between English and émigré into the later sixteenth century. We hope that the results of research explained in detail below once combined with other studies will help to increase our understanding of the practices of émigré artists working in England.

All the known portraits of Mary I by Hans Eworth appear to result from a sitting from the life in 1554. This portrait is signed 'HE' and dated in tiny letters at the top left. In addition to the NPG image there are four other surviving examples by Eworth which all appear to use the same facemask and headdress pattern. These are:

The double portrait of Lady Dacre and her son is one of Eworth's most accomplished paintings. The portrait was securely re-identified as the current sitters following research by Dr. Susan Foister in 1986, see bibliography. This remarkable portrait is made up of a single panel of wood, a fact which contributes to its excellent condition. Signed 'HE'

Signed 'HE' and in good condition, this portrait has very extensive underdrawing (as seen below).

This portrait is heavily restored. The painting has suffered considerable damage in the past and part of the original left panel has been lost replaced with modern addition. No 'HE' monogram but possibly lost at left edge.

The use of dendrochronology on securely dated material provides useful evidence about patterns of production and panel usage. Evidence from dendrochronology indicates that the panels employed by Eworth seem to have been put to use relatively soon after the wood was felled, i.e. between 7 and 14 years. This may reflect a pattern which current research shows is beginning to emerge with other artists working in England at this date. Further research to be undertaken over the next few years (2008-9) will bring together additional data from this period. The results of dendrochronology on this group were as follows:

Painting technique: The painting technique of all four pictures was found to be very similar. A white chalk ground was used in all pictures, followed by a thin light brown priming layer in the case of Dacre double portrait and Heath, while Mary and Browne had no priming layer evident. The paint was thinly and economically applied and the priming layer was occasionally left partially exposed to create highlights, providing a transparent semi luminous quality. The double Dacre portrait and portrait of Mary I have a high level of attention to surface detail and some very finely and confidently blended areas. Heath also has some wonderfully blended areas painted wet in wet. The portrait of Browne is confidently painted in a similar technique, however it does not show any of the noteworthy subtleties seen in the three other pictures and some areas are executed rather mechanically, perhaps indicating the presence of studio hands. 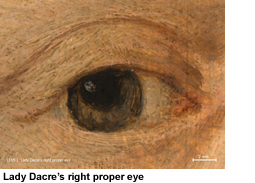 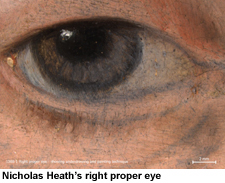 The painting of the eyes in the portrait of Lady Dacre and Gregory Fiennes, show a very similar method to that of Heath with a blue-grey scumble over the ground. 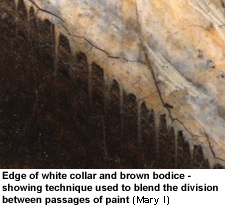 One feature found in both Eworth's Mary I and the portrait of Browne is a an apparently unusual painting technique which may involve the use of a tool or comb with fixed teeth. The collar of Mary I viewed at very high magnification shows very thin paint application and the use of the combed blending technique where white paint is dragged into black, removing some of the black paint. The same technique was also found on the portrait of Anthony Browne in the brown tunic, which is blended down over the brown by scraping down with a comb tool to remove a little of the brown paint.

In these portraits Eworth used underdrawing extensively. Some of underdrawing is evident to the naked eye but can be seen most clearly in infrared reflectography. Eworth appears to be using both a liquid medium with a brush and probably also black chalk. However, distinguishing between these media is complex, particularly when the ground is slightly textured which can create distortions to the appearance of the drawn line. The underdrawing in the Dacre double portrait is relatively free and is used to mark out the outline of the costume. Curiously, no drawing is found in either of the faces and is possible the medium here may be red chalk which is not detectable with infra red. This is also the case in John 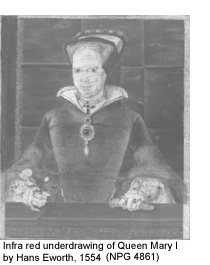 Luttrell portrait by Hans Eworth at the Courtauld Gallery which has no underdrawing beneath the painted head but much elsewhere (Dynasties, 1995, p. 65). In the portrait of Mary I there is considerable amount of underdrawing, probably carefully copied from the existing pattern produced the same year for the portrait of Mary I now at the Society of Antiquities, which is almost certainly the prime version. The results of infrared on the Society of Antiquities portrait also shows even more extensive underdrawing.

The portrait of Heath shows very extensive underdrawing evident in thick black lines, possibly brush and ink. These marks appear hard and mechanical and especially the hands have the appearance of being reproduced through a tracing or other transfer method. Similarly, in the portrait of Browne the infrared results show mechanical underdrawing which has likely been traced on to the panel.

Changes to the compositions

All four portraits were carefully planned and worked out in advance and there are very few changes to the compositions. A few minor alterations can be seen using x-ray and infrared reflectography. These are as follows:

Mary I: Little finger of the right hand has moved position.
Dacre: The face of Fiennes has been made less full when the paint layers were applied. In addition the width of the black veil hanging down from the back of Lady Dacre's headdress shows alteration, it has been made a little narrower during the painting process

Roy Strong, 'Hans Eworth: A Tudor Artist and his Circle' and Hans Eworth Reconsidered' The Tudor and Stuart Monarch Pageantry, Painting, Iconography I. Tudor, The Boydell Press, 1995, pp.135-145 and pp.147-152