The Art of the Picture Frame 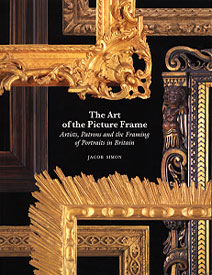 The Art of the Picture Frame book cover

The Art of the Picture Frame
Updated September 2017

This ongoing website feature arises out of the interest shown in the exhibition, The Art of the Picture Frame, held at the National Portrait Gallery from 8 November 1996 to 9 February 1997. It was launched in April 1998. It provides an update on the exhibition and gives information on current research.

Contributions are welcome on framing and reframing work at museums and galleries and on forthcoming publications and exhibitions, as are longer features on the history, technique and conservation of picture frames. Send to Jacob Simon, National Portrait Gallery, London WC2H 0HE or e-mail to [email protected].

Artists and their frames

Identifying the Framemakers of 18th-century Paris -- by Edgar Harden
A frame by Martha Somerville, a Victorian carver in Italy

Extending frames
Oxford frames
Framing in the reign of Charles II and the introduction of the Sunderland frame
Northern European Frames: a conference at Dresden -- by Lynn Roberts
New York University Frame Conference

Frames on the Internet
Annotated bibliography of frame publications
An update on the National Portrait Gallery exhibition, The Art of the Picture Frame
The New Oxford Oxford Dictionary of National Biography - by Lynn Roberts