A note on George Romney and picture framing

This note was produced on the occasion of a lecture by Jacob Simon to the Romney Society on 14 October 1998 and was added to the National Portrait Gallery website in December 1998.

Romney was the son of a cabinet maker. He was born in 1734 near Dalton-in-Furness in Lancashire and entered his father's business at the age of about 10. It was not until 1755 when he was 20 that he began training as an artist under the itinerant portrait painter, Christopher Steele, at Kendal, York and Lancaster. After two years Romney left his master and set up on his own in Kendal. He moved to London in 1762, exhibiting at the Free Society of Artists from 1763, and winning premiums for history painting from the Society of Arts in 1763 and 1765. Romney soon met with success as a portrait painter, though he always aspired to the supposedly higher realms of history painting.

Romney's career falls into three periods: at Kendal from 1757 to 1762, in London from 1762 to 1773 and then, following a two-year visit to Italy, in London again from 1775 until his retirement in 1796. This second period in London is amply documented, thanks to the survival of Romney's diaries and framing books. It is clear that most of Romney's patrons were content to use the artist's framemaker, rather than go to the trouble of finding one of their own; they were also happy to have their portraits framed in standard 'Romney' patterns.

Romney's early frames remain to be studied in depth. In the Memoirs of George Romney, written by his son John and published in 1830, there is an account of Romney carving a frame for his master, Christopher Steele. More recently it has been surmised that Romney used the skills he had acquired in his father's joinery and cabinet-making business to produce his own frames when he set up as an independent master in Kendal; there is, however, no known frame which can be attributed securely to Romney himself.

Two portraits of or about 1760 show the diversity of frame types found on his early portraits: John Postlethwaite (on loan to Abbot Hall Art Gallery, Kendal) with its pierced rococo frame in the French style with elegant swept sides and corner rosettes, and the Rev. Daniel Wilson (Wakefield Art Gallery) with its more severe Italianate classical pattern with prominent egg-in-a-nest or cabochon decoration on the top edge.

In London in the 1760s a number of his portraits have richly carved gadrooned frames (the 'gadrooning' is the repeated diagonal ribbing ornamenting the top edge). Examples include his portraits of the Rackett family (private collection) and those of Mr and Mrs Rawlinson (Judges Lodgings, Lancaster). There is some evidence to suggest that by about 1770 Romney may already have been using the neo-classical frames which become so common later, with simple straight ribbing set at right angles to the top edge. However, his frames of these years need much more detailed scrutiny; very little documentation survives for the period and it is not even known which framemaker he was using during his first stay in London.

In contrast, Romney's frames following his return to London from Italy in 1775 are superbly well-documented, so much so that even the introduction of new or variant styles is recorded at intervals, as is discussed in more detail below. In most cases his patrons were happy to leave the framing to him, and the frames on these pictures are almost all in the neo-classical style. Many of them conform to a single pattern with ribbed top edge and ribbon-and-reeded sight edge, the classic 'Romney frame'.

The names of the two framemakers Romney used following his return from Italy in 1775 are known. Until 1781 he used Thomas Allwood of no. 35 Great Russell Street, Bloomsbury. Allwood was active as a carver and gilder from at least 1772 until 1793. He is also known to have framed some of George Stubbs's paintings and to have worked for the Dowager Duchess of Bedford, 1772-85, and the future Prince Regent, 1783-86. 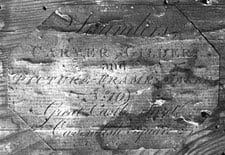 Fig. 1 The label of William Saunders, found on the back of Romney's William Paley (see fig. 2)
(National Portrait Gallery)

From 1782 onwards Romney used the services of William Saunders. The early accounts are in the name of Eade & Saunders, but Saunders' partnership with Henry Eade broke up in 1783, and thereafter all the accounts are in Saunders' name. His frameshop was at no. 10 Great Castle Street, only a few hundred yards from Romney's studio in Cavendish Square. Saunders was succeeded in business by his son, Thomas Saunders, recorded at the Great Castle Street address in 1815 and 1817, and by James Saunders, recorded at the same address from 1819 to 1825.

George Romney's later picture frames are exceptionally well documented owing to the survival of some of his framemakers' books in the Fitzwilliam Museum, Cambridge. They provide an unusual insight into the methods of a portrait painter who liked to use a variety of neo-classical mouldings. 'Allwood's Carving Book', as it is inscribed, provides details of the frames Thomas Allwood made for Romney's portraits from 1775 to 1781. Many of the frames are specified by the name of the sitter who had previously used the pattern, thus 'Mr Bucks patn', 'Mr . Sullivan's patn', 'Lord Gowers patn', 'Capt Beards pattern'. Allwood's account includes an entry for 'A 3/4 around Lord Gowers portrait in the Shew Room' (a three-quarter frame was for a picture size 30 x 25 3/4 inches), which indicates that at least one of these patterns was on display in Romney's showroom. Some frames are described more specifically: 'A 3/4 fluted frame', 'A 3/4 new patn. with Reeds and Ribns crossing' (the reeds-and-ribbons pattern becoming a favourite), 'A 3/4 frame with Ribn. s in the Corners and Middles', 'A 3/4 with a Vine frett', 'A 3/4 frame new patn. with Oval inside'.

When William Saunders replaced Allwood as Romney's framemaker in 1782 a new 'Framemakers Book' was started. Saunders worked for Romney throughout the 1780s and 1790s. The early accounts are in the name 'Eade & Saunders' and specify most of the frames as being of profiles A, B or C (what those profiles were is not described), sometimes including further details such as the entry for 17 October 1782 for 'a 3/4 picture frame 3 members [i.e. 3 bands of decoration] carv'd & gilt in Burnish Gold husks beads & Ribbond & Stick of the profile B' at two guineas (£2.2s), or that on 31 October for 'a 3/4 picture frame 3 members carved small strap close beads and plain strap with stalks on top round of profile C & gilt in Burnish Gold', which was more expensive at two-and-a-half guineas (£2.12s.6d). 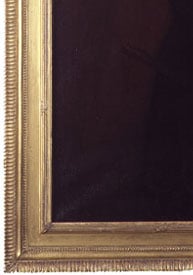 Evidently the starting-point, at least for the framemaker, was the profile of the frame; the decoration could be varied at will within certain limits. Saunders could also provide frames for whole-length portraits to the same profiles; such a frame made to profile A for the Earl of Derby cost £9.15s.6d in 1783. Only twice is a Maratta frame mentioned (taking its name from the painter, Carlo Maratta) and indeed such frames rarely occur on Romney's work of the 1780s, although they remained popular with some portrait painters. The neo-classical frame (fig. 2) on his portrait of William Paley in the National Portrait Gallery still retains its maker's label of William Saunders (fig. 1). Its reeded sight edge tied by ribbons and the ribbed top edge are hallmarks of the Romney frame in the 1780s.

The distinctive nature of Romney's patterns make it possible to suggest that the artist played a significant part in the choice of the frames, in collaboration with his framemaker, especially in the cases of Lord Gower's frame and of the other frames which were made for pictures in his showroom. The fact that there is little change in appearance between the frames made before 1782, presumably by Allwood, and those made by Saunders afterwards, indicates that the dominant consideration in their design was Romney's taste for neo-classical frames of fairly chaste appearance.

'Every portrait painter in England has a room to show his pictures, separate from that in which he works. People who have nothing to do, make it one of their morning amusements, to go and see these collections'. So wrote the miniaturist, André Rouquet, in The Present State of the Arts in England in 1754. For Romney his showroom was an important way of showing off his pictures, all the more so since he did not exhibit at the Royal Academy. 'His shew-room contains a large display of the portraits of well-known characters', reads an account in the Morning Herald in April 1787, one of several such newspaper notices describing portraits to be seen at Romney's studio. Probably all the portraits to be admired in the showroom were exhibited framed. The accounts of Thomas Allwood and William Saunders refer to portraits in the showroom and to frames made 'to shew pictures'.

While some patrons chose to use their own framemaker, most were only too glad to let Romney arrange the framing. Some 70% of his pictures were framed by Saunders in one year, 1789, chosen as a sample for detailed analysis. These frames must have formed a significant, predictable and profitable part of Saunders' business, especially since much of the work was made to set patterns and standard sizes. The frames were not cheap but their cost was not really significant compared to the fee that Romney charged for the portrait itself. What is more Romney received a discount or cut on the business which he brought Saunders as the regular settlement of accounts between the two men makes clear: 10s for a three-quarter, the smallest standard size, 18s for a half-length and £1.9s for a whole-length, quite considerable sums. For example on 16 August 1786 Sir Banks Jenkinson paid Saunders £3.15s for a '3/4 frame & case', that is a frame for a 30 x 25 ins portrait, and Romney was allocated 10s of the receipts by Saunders which may be compared to the £21 Romney received for the portrait itself. This practice was not exceptional, as Joseph Farington, a leading Royal Academician, told Sir George Beaumont in 1806: 'Sir Joshua Reynolds and all others had an allowance from the frame maker, but that the price to others was not encreased by it, as that allowance was deducted from the common profit of the frame maker. It was what may be called a trade allowance'.

After Romney's death in 1802, William Saunders played a leading role in the clearing up of his estate. And later Saunders assisted Romney's son, the Rev. John Romney, in his memoirs of his father's life and work. It is to Saunders, too, that we owe the survival of so much documentation relating to Romney's frames.