This article reviews the frames in the exhibition "Raeburn's Rival, Archibald Skirving 1749-1819", held at the Scottish National Portrait Gallery from 27 January to 5 April 1999. Skirving was a prolific pastellist and his mastery in this medium sets him apart from other portraitists of the time.

Just as Henry Raeburn and many other British artists of this period travelled to Italy to further their artistic skills and career, so Archibald Skirving spent the years 1787 to 1794 in Rome. His pastels of Francis Charteris, Viscount Elcho of Amisfield and Francis Charteris, 8th Earl of Wemyss, both of 1790, were completed, and most likely framed whilst Skirving was in Rome. This pair of Italian frames consist of poplar wood (visible on the reverse) with carved, overlapping laurel leaf detail on the top edge (possibly boxwood), beading on the inner edge (missing in areas), and a plain back hollow, a standard Roman product of the 1790s.

Also very Roman in character are the frames on two smaller pastels, Benjamin Yule (fig. 1) and Marion Sprot, Mrs Benjamin Yule of c. 1796-1800. These original frames show a flat top edge, angular leaf-and-tongue detail, flat, fillet, string-and-pearl, and inner spandrel. They relate closely in the exhibition to the frames used by another British artist in Rome, Hugh Douglas Hamilton, despite lacking the corner rosettes in the hatched inner spandrels. These Hamilton works were completed and framed in Rome, so denoting an Italian design. The frames on the Skirvings were most likely copied from this type (without hatching and rosettes) and perhaps made in Edinburgh, the beading visibly more crude. 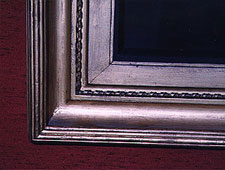 Skirving returned to Edinburgh in 1795 when a number of recurring frame types can be identified. The frames surrounding three works circa 1800, William Craig, Lord Craig, Alexander Fraser Tytler, Lord Woodhouselee and Margaret Sym, Mrs John Wilson (fig. 2) show certain stylistic similarities. Although the outer elements vary, the inner details are alike; the sight edge leading to a flat, a small scotia with a tightly twisted ribbon below a fillet, and then a scotia. The Alexander Fraser Tytler frame seems to have been embellished with incised scrolling leaves on the corners of the inner flat, and applied acanthus leaves in the corners of the scotia, the reeded top rail with entwined ribbon. The Lord Craig frame has beading at the base of the scotia and an egg-and-dart back edge; further research is required for the distinctive reel-and-triple-bead feature below the top edge of this frame.

Another frame type of this period is found on the pastel John Clerk of Eldin of 1799 - 1800, the basic profile section of which is also found on Henry Home Drummond, 6th Laird of Blair Drummond (fig. 3) and Mary Drummond, Mrs John Pringle of Stitchell, both of c.1798. The John Clerk of Eldin frame consists of a flat top edge, leaf-and-tongue detail on a flat section below (badly re-gessoed in places), a small ovolo moulding, a flat area, a characteristic fillet border, and incorporating a small string-and-pearl detail towards the sight edge. It is unknown who was framing for Skirving at this date. The frame on Mrs Johnston of Hutton Hall of c. 1796-1800 has a different moulding but contains similar stylistic elements. The portrait of Archibald Skirving of c.1810 after Sir Henry Raeburn also has a frame which uses these elements, although the positioning of the beading and leaf-and-tongue detail is reversed. Despite this frame having been re-gilt and the sight slip replaced, it is possibly an original frame.

It is appropriate to mention that many of the works discussed here are of family descent, so strengthening the argument that these are the original frames. A substantial percentage of the works in the exhibition are from private collections, with their continuity in ownership contributing greatly to the apparent survival of the original frames. In addition to this, a large majority of Skirving's work are pastels and chalks, which often maintain their original frames and glazing due to the fragility of the materials, and the potential damage which would be caused with replacement.

This leads on to a pastel with its original gilt frame and glass, Robert Dundas of Arniston of 1800-1. Where the title of the exhibition draws comparison with Henry Raeburn, this frame type is one which can be stylistically linked to those found on the work of Raeburn at this time. Although the cabling is slightly looser than normally expected, the frame is almost identical to those previously linked to an Edinburgh framemaker c.1800, Alexander Thomson. 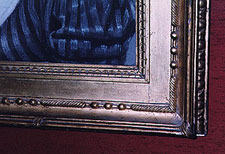 A pastel situated in close proximity, Isabella Fraser Tytler of c. 1801 (fig. 4), has its original frame and is also in this 'Raeburn' style, i.e. the plain tongue detail towards the sight edge, bordered by a fillet, the flat with its corner joints characteristically at a right angle whilst the jointing in the hollow is diagonal, the ball-and-cabled bobbin (carved) at the base of the hollow, ribbon-and-reed top edge, and egg-and-dart detailing on the back edge. Both of these gilt frames have an appropriate date for association with Thomson who worked nearby Skirving, at the Head of Calton from 1799 to 1809. 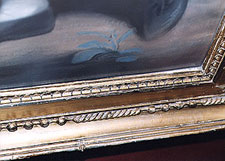 It is interesting to note that the Robert Dundas of Arniston frame's inside edge is adapted to accommodate the glass (see fig. 5). The glass has a discrepancy common to the broad glass method of production, the manufacturing technique which entailed flattening the sheet of glass from a cylindrical shape. The inside sight edge is wider at the corners than in the centre, in order to fit the bowed shape of the front of the glass. Slight ripples are visible in the glass.

The evidence would indicate that works were framed and glazed in the studio before going to the patron, so that Skirving would have inevitably played a decisive role in the choice of frames. A large number of works mentioned in the inventories by George Watson and William Bruce, completed on Skirving's death, are listed as "framed and glazed". These inventories are shown in the exhibition along with the original bill from the Edinburgh firm of carvers and gilders, Chalmers and Son, which spans the years 1814 to 1818. Chalmers' bill shows that they supplied Skirving with London crown glass and plate glass. Crown glass would only have been used on the smaller works as panes were cut from discs spun to a maximum diameter of four feet. William Chalmers was first listed in the Post Office Directories in 1799 as a 'picture framer and gilder' with his son, Thomas, later joining him in partnership. Their workshops and warerooms were situated on the High Street, in Edinburgh's Old Town, with their prominent business continuing into the 1840s.

There are three non-gilt frames in the exhibition which can be positively linked with Chalmers. Where the frames surrounding Raeburn's work were exclusively gilt, as seen in the Raeburn exhibition held in 1997, the frames on Skirving's work include differing woods. The survival of the framer's bill documents his use of varying wood types. 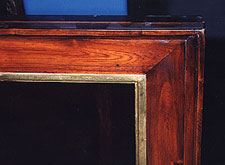 The first to be discussed is Captain Robert Skirving of Croys of 1813 by Andrew Geddes (fig. 6), an oil on panel, which has an oak carcass and backboard (visible on the reverse) and walnut veneer on the front with a plain gilt sight edge. The walnut veneered flat has a solid walnut moulding attached to the outer edge and the sight edge is most likely replaced. This picture is documented in the Chalmers accounts under the entry of 4 April 1818, " To an oak frame for a Portrait of his brother by Geddes - and pasting a Board on the face for backing " and is priced at five shillings. However, the frame front is not oak, and it remains to be established if the later entry of 21 September is applicable, " To a walnut Tree & Gold frame - 9 feet 9 Inches at 4/- per foot ". This walnut frame cost £1 19 shillings. There are numerous listings for frames " Brown and Gold ", in addition to a " Mahogany and Gold " frame at three shillings per foot.

Two similar frames, most likely by Chalmers, are Skirving's An Unknown Lady of 1816 and Father James McCormick of c.1787-94, both red chalk drawings. Although they do not have a walnut veneer, they follow the same design and doubtless come under the `brown and gold' entries, as seen in the bill. The Unknown Lady coincides with the time bracket of this bill. Both frames still have an applied, moulded top edge and gilt inner edges (re-gilded). It is a plain design, yet distinctive and easily recognisable. These three works all have tapered mitre joints on the reverse, expected on frames of the period.

Skirving used Chalmers for a variety of services ranging from making packing boxes to the more unusual " carrying a bust several times ". The William Bruce "Inventory and Appraisement of Sundry Effects which belonged to the late Mr Archibald Skirving" shows that he also rented a house from Chalmers. Skirving had no hesitation in dealing frankly with his clients and certainly would have changed framers had he not been satisfied with their work. Although he used the same framer for four years, this does not mean that he did not commission the service of other framemakers during these years. As a highly regarded portraitist of the time, Skirving would not be expected to use a substandard framer. Unfortunately the receipts and correspondence, which he is meant to have fastidiously kept and may have been a great source of information, are now destroyed. However, the visual evidence of the exhibition allows several stylistic elements and frame types to be positively associated with Skirving.

Acknowledgements : Thanks go to Stephen Lloyd of the Scottish National Portrait Gallery and Keith Morrison of the National Galleries of Scotland.