Identifying the Framemakers of 18th-century Paris*

Among the fine European picture frames in the collections of the world's museums, the stocks of frame and picture dealers, the salesrooms of auction houses, and the residences of collectors are 18th-century Parisian examples stamped with the name of the menuisier that made them. Twenty-two framemakers have been identified by their stamp, to be found on the backs of régence, rococo, and neoclassical picture frames: Étienne Avril, Henri Brunel, Cardereau, Jacques-Charles-Denis Chartier, Jean Chérin, Jean-Jacques Coiffié, Thomas Dumont, Paul Georges, Nicolas Heurtaut, Claude and Étienne-Louis Infroit, André Lambert, Henri Létonné, Antoine Levert, Pierre Meunier, Pierre-François Millet, Claude Pépin, Jacques Roze, A. Solaro Schlüss, Denis Toupillier, André Tramblin, and T.-S. Vasseur. Because the names of most French framemakers of the period remain unknown, stamped picture frames are of prime importance.

Before about 1750 the identity of most Parisian framemakers remains obscure due to the lack of stamping, although marking ones work in this manner had been required by the carpenters' (menuisiers) and cabinet makers' (ébénistes) guild since the late 17th century. This is one reason why the study of picture frames within the decorative arts has been neglected. However, even the mid to late 18th-century Parisian framemakers who stamped their frames have remained absent from the most highly-regarded furniture studies, and their contributions to the decorative arts overlooked, because scholarship and the market have been slow in understanding how to evaluate their production. These framemakers can be identified through the use of archival records and by stylistic features particular to their working practices, and there is no reason why this chapter of the history of 18th-century French decorative arts should remain unwritten. The quality and quantity of stamped picture frames earn them a place in furniture history, and their régence, rococo, and neoclassical styles signal important periods in the history of decoration and collecting.

Through a reconstruction of the lives and work of these twenty-three menuisiers a greater understanding can be provided of both the world of the 18th-century Parisian framemaker and of the objects produced. These artisans made both conventional and highly sophisticated frames for small engravings and full-sized painted portraits alike, and the corpus of works bearing their stamps represents, in terms of quality and craftsmanship, the full range of ready-made and made-to-order frames for the upper market.

Menuisiers began their career with a nine year training period in the shop of a maître-menuisier from the guild of menuisier-ébénistes, for six years as an apprenti and three as a compagnon. They then had to produce a masterpiece in order to prove that they were capable of making a well-designed and well-executed object. The fee to become a master was high, and often took several years to pay. This delayed the official registration of new masters and the receipt of the letters and patent that permitted them to stamp their work. (1) New masters obviously paid their fees as quickly as they could.

Sculpteurs en bois began their careers with a nine year training period in the shop of a maître-sculpteur who had been trained at the Academy of Saint-Luc. They worked for five years as an apprenti and four as a compagnon. They then had to produce a masterpiece to prove themselves able sculpteurs. New sculpteurs paid their fees to the Academy of Saint-Luc. They also paid them as quickly as possible, for although they were allowed to work prior to this, they could not open their own shop until they had.

Of the twenty-two artisans identified, only two, Jean Chérin and Étienne-Louis Infroit, were officially registered as menuisiers and sculpteurs. They both built and carved the frames that bear their stamps (see figs 1-6). The stamp marks their work as menuisiers, for they used the skills of this trade to make the backings for frames. The other twenty were officially members of only the menuisiers ' guild. They probably also carved their frames, although they were not officially registered as sculpteurs with the Academy of Saint-Luc. 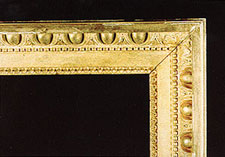 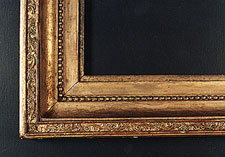 It was the growing disparity between the rights of menuisiers and sculpteurs which forced Chérin and Infroit to become double-masters. Since the writing of the guild charters in 1645, menuisiers had been allowed to carve their own work, but sculpteurs had not been allowed to build theirs, an inequality reinforced during the 18th-century, when, in March 1744, Louis XV awarded the menuisiers-ébénistes their patent letters, as proposed on 28 December, 1743 by police lieutenant-général Feydeau de Marville. (2) These statutes were registered at parliament on 20 August, 1751 and printed as the Statuts, privilèges, ordonnances et règlemens de la Communauté des maîtres ménuisiers et ébénistes de la ville, fauxbourgs et banlieue de Paris. (3) The sculpteurs opposed the statutes of the menuisiers ' guild and were finally given the exclusive right to carve. This made the two trades at once quite independent and dependent on one another, as the menuisiers could only build and the sculpteurs could only carve. If sculpteurs defied the menuisiers ' guild by making the backings for frames, thus depriving menuisiers of work, then they were heavily fined and their work was confiscated. The guild forced sculpteurs to pursue the double qualification of menuisier, wherewith they could build and carve a frame without disturbing guild regulations and without having to subcontract its construction to a menuisier. It coerced sculpteurs to join their organization by, as they said, "increasing the troubles and interventions of the false workers in order to convince them to become masters (multiplier les soins et démarches auprès des faux ouvriers pour les solliciter de venir à la maîtrise)". (4) By contrast to the menuisiers ' guild, the Academy of Saint-Luc, a training ground for sculpteurs who then became members, had neither the revenue nor the power of the guild and could not, therefore, enforce the rule that menuisiers who were not members of the Academy could not carve the furniture they built. As such, the sculpteurs Jean Chérin and Étienne-Louis Infroit, were forced to become menuisiers, while all the other aforementioned menuisiers carved the frames they built, unimpeded.

These framemakers all lived and worked in the same neighbourhood in the faubourg Saint-Antoine, the furniture-making district in 18th-century Paris. The frames illustrated here as figs 1-6 are standard, rectangular neoclassical models made of oak with mitered corners secured with nails and a key slid through a channel cut perpendicular to the miter. They are uncut, retain their original keys, and the rabbets have not been routed out. They are entirely carved. The gesso on the carving was prepared with red bole, water-gilt, and then varnished to build a warm patina and to protect the surface against abrasion. They retain some or all of their original gilding and varnish. Molded plaster ornament is mentioned where present.

* This is the introduction to a longer study on the framemakers of 18th-century Paris.

(1). Although the menuisier en sièges Jacques-Jean-Baptiste Tilliard became a master on 26 July, 1752 (Tableau général de MM. les maîtres Peintres, Sculpteurs, etc., de la dite communauté, 1785), he was not awarded his letters and patent until 17 April, 1764 (Archives Nationales, Y 9328). He worked under the supervision of his father for fourteen years until he finished paying his master's fee and did not stamp his work until this late date; Bill G. B. Pallot, The Art of the Chair in 18th-century France (Paris: ACR-Gismondi, 1989), pp. 21, 22, 24.

(3). The chair and frame sculpteur Nicolas Heurtaut (1720-71) became a member of the Academy of Saint-Luc in 1742, and then produced, in accordance with the rules of the menuisiers ' guild, even though he himself was not a member, carved work on chairs sub-contracted to him by menuisiers. In 1753 he became a member of the menuisiers ' guild, and reserved the right to build and carve chairs; see John Whitehead, The French Interior in the Eighteenth Century, (New York: Dutton, 1993), p. 119. In the case of frame makers, it made sense to also be recognized as a menuisier because constructing the backing, creating a profile, and carving the front of a frame are practically inseparable in their highly linear neoclassical work.

(4). Augarde, pp. 52-57. François, Comte de Salverte (Les ébénistes du XVIIIième siècle: leurs uvres et leurs marques. 2nd ed. Paris, 1927, p. 158) hypothesized that, because of unpleasant dealings with the menuisiers ' guild when Infroit had been caught making the backings for his own frames, he solicited reception to, or was "invited" to join the guild, so as to work in conformity with its rules.