A frame by Martha Somerville, a Victorian carver in Italy 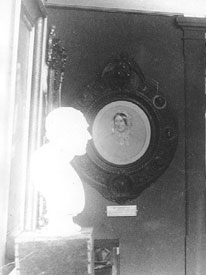 This is the sad story of the fate of an exceptionally elaborate picture frame, carved by the daughter of the celebrated scientific writer, Mary Somerville. It is a story of the perennial problem faced by curators: fitting an exceptional frame, designed for another setting or circumstance, into a museum display.

Mary Somerville's portrait, a chalk drawing by James Swinton dated 1848, today hangs at Bodelwyddan Castle in Wales, one of the National Portrait Gallery's regional partnerships, in a plain flat gilt frame with sanded sides and rosette corners. The Gallery records reveal that this frame was fitted to the picture on 19 March 1896 by Francis Draper, then the Gallery's framemaker. But when the picture came to the Gallery in 1883, as the result of a bequest by Mary Somerville's daughter, Miss Martha Charters Somerville, it was housed in a 'richly carved brown wooden oval frame', as it was described in the 1888 NPG catalogue. The frame can just be made out in a photograph of the NPG collection hanging at the South Kensington Museum in 1885 (see reproduction).

This frame must have been about 12 or 13 ins wide compared to the oval drawing's 27 x 24ins. Before the portrait was accepted, George Scharf, the Gallery's Director, wrote to Sir William Ramsay Fairfax, Martha Somerville's executor: 'I have heard incidentally that the carved frame is massive and elaborate and possibly in excess of what the Trustees might deem suitable among the other frames in the Collection. I therefore venture to ask you in strict confidence whether you would like to retain the frame for yourself ..... Of course if the frame has any special emblems on it, the Trustees would not desire even to suggest a separation ...' To which Sir William responded, 'the frame was carved expressly for the picture by ... Miss Somerville, and is beautifully done ... I think, besides, that the picture would be poor looking without it'.

When the picture arrived Scharf wrote back, 'The frame is most admirably wrought and from the skill displayed in it I am induced to believe that the same lady must have executed many specimens'. Unfortunately nothing is known of Martha Somerville's work as a carver. She was born in 1815 and lived in Italy with her mother for many years from the late 1830s, eventually publishing her Personal Recollections of Mary Somerville. She died in 1879.

The frame is an oversize version of an Italian Renaissance tondo frame. The use of carved heads in roundels was perhaps inspired by Michelangelo's Holy Family in the Uffizi which retains its original frame. Martha Somerville may have carved the frame in Florence at the time of the drawing's execution in 1848, or soon after, at a period when the Italian renaissance style was just beginning to come back into fashion for picture frames.

What then happened to this exceptional frame, carved by one woman for the portrait of another, her mother? A new director, Lionel Cust, was appointed in 1895. In the rush to open the National Portrait Gallery's first permanent home in 1896, various pictures were reframed for the occasion, including the Somerville portrait. Was the old frame sold or destroyed? The trail goes cold at this point.

Acknowledgement: My thanks to Lara Perry, who is researching the history of the National Portrait Gallery. Her enquiry about the picture's original frame directed me to this interesting episode in the Gallery's history.

Note: This article was previously titled: How could the National Portrait Gallery have done it?