A Guide to Picture Frames at Beningbrough Hall, Yorkshire

This guide was first produced on the occasion of a lecture by Jacob Simon at Beningbrough Hall on 24 June 1998. Beningbrough, eight miles outside York, is an imposing house built for John Bourchier on his return from the Grand Tour and completed in 1716. The baroque interiors are ornamented with some of the most exceptional woodcarving of the period. Beningbrough is owned by the National Trust and houses more than 120 portraits on loan from the National Portrait Gallery. For opening times, see the National Trust website, www.nationaltrust.org.uk/ or telephone 01904 470 666.

The picture frame has existed for as long as pictures have been moveable. Any moveable painting required a frame to protect it and even a fixed painting, such as the overdoors at Beningbrough, needed some sort of framework. While the frame may have started out as a form of protection, its visual and symbolic purposes soon became very important. At Beningbrough the visitor has the opportunity to study the superb early eighteenth-century woodcarving of the house itself, as well as the picture frames which range in date from the mid-seventeenth century onwards, with an emphasis on the period 1680-1770.

The story of the picture frame in England really begins in the sixteenth century. The earliest frames were made of oak, which remained popular until the mid-seventeenth century and was used again in the late nineteenth century. From the late seventeenth until the twentieth century, pine was the most frequently used wood, but lime, a softer, paler timber, was often used for the most delicate carving as in the State Bedchamber and adjoining 'cabinet' rooms at Beningbrough. The earliest frames were joined at the corners with a lap joint, where the frame sides overlap, but by the eighteenth century, the mitre joint, where the corners are cut diagonally and are joined by a key on the rear side of the frame, had become universal.

In the sixteenth century frames were usually painted, but from the seventeenth century onwards many frames were gilt, that is covered in gold leaf, or finished in silver and lacquered for protection and to give the appearance of gold. The gold leaf was attached by an oil-based adhesive ('oil gilt') or one which was water-based ('water gilt'). Water gilding was a more time-consuming process and required a special preparation of clay (the 'bole') which provided the firm, smooth foundation necessary for the gilding to be burnished, or polished.

Elaborately carved frames were expensive to make. It was cheaper to produce ornament by pressing a pliable material, such as papier-mâché or compo, in a mould, and then setting it on a wooden framework. Papier-mâché was used in the mid-18th century and again for a time in the mid-nineteenth century. It was, however, the introduction of compo, a composition of whiting, glue, resin and linseed oil, in the late eighteenth century, which drove out the carved frame. Compo allowed for larger and more richly ornamented frames but its fragility proved a drawback.

The Artist and the Picture Frame 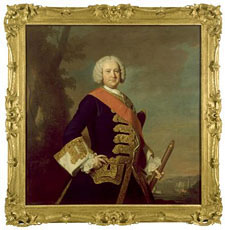 Artists throughout the centuries have taken an interest in how their paintings were framed, and this is particularly the case with portrait painters, who often have been obliged to make framing arrangements for their clients. Some evidence of the taste of artists in framing survives from the eighteenth century onwards, but it is sometimes difficult to ascertain the precise nature of their involvement. An artist's preference, however, can often be discerned by identifying those frame patterns which occur exclusively or frequently on his or her pictures. An example is the unusual rococo pattern on Thomas Hudson's Sir Peter Warren (Great Staircase; see fig.1), a design often found in this form on Hudson's work in the 1750s.

William Hoare of Bath, a contemporary of Hudson, used a variety of frame types during his career, including a restrained Maratta pattern, named after the Italian artist Carlo Maratta, for his oil, Christopher Anstey and his daughter, Mary (Family Matters).

George Frederic Watts gave his name to the well-known Watts pattern which was taken up by many artists in the late 19th century. It can be found on the pastel of Lady Victoria Dawnay (Blue Bedroom), by an unknown artist.

The Role of the Patron

Whatever the wishes of the artist, it was the patron who had the final word on the framing of all commissioned portraits. Grand pictures commissioned by rich patrons were more likely to be elaborately framed, as in the case of the large family group of The Taylor Family (Saloon) with its fine carving.

Sometimes pictures might be framed or reframed for a particular setting. Jacob Tonson junior (Dining Room), for example, had the large series of portraits by Sir Godfrey Kneller of members of the Kit-Cat Club (Dining Room) uniformly framed in 1733 to be hung together in a specially designed pavilion.

Not surprisingly, the patron whose hand can most often be seen at work at Beningbrough is that of the National Portrait Gallery itself. From the mid-nineteenth century onwards, many period pictures have been reframed by the Gallery. So while frames may be original in the sense of being of the period, they are not necessarily all original to the picture. Some of these frames are highlighted in the text which follows.

Much of the fine architectural decoration in the Hall is in stone or plaster rather than wood, the junction between plaster and wood being clearly visible at balcony level where the cornice above the pilasters steps back to meet the balcony woodwork. The Hall's bold repetitive running mouldings, such a feature of decoration of the baroque period, may be compared to the carving on some of the picture frames. The distinctive ribbing, known as gadrooning, on Kneller's Duke of Bedford relates closely to the plinth below the marble bust of Pope Clement XIV while the intricate foliage pattern on the same artist's George I , a picture painted in 1716, the year that Beningbrough was completed, may be compared to some of the cornices.
On the Great Staircase Thomas Hudson's prominently placed Sir Peter Warren (fig.1) is in a distinctive rococo pattern of a type often used by this artist in the 1750s: this was at a time when the selection of a stylish frame was assuming much greater importance for artists. The plasterwork of the staircase itself is a puzzle; the white plaster frames ornamenting the walls combine a variety of Palladian, rococo and other motifs and is evidently later in date than the staircase woodwork and most of the other interiors at Beningbrough.
Some of the richest woodcarving at Beningbrough can be seen in the cornices and overdoors of the Drawing Room, work produced by unknown but highly skilled carvers of the York school to the order of William Thornton, the supervising architect at Beningbrough. The overdoor pictures have their own individual carved and gilt frames which in comparison are comparatively modest. The Kit-Cat Club (Dining Room) was a Whig political dining club which first met at Christopher Cat's Tavern. The portraits are double hung here, rather as they would have been in Jacob Tonson junior's pavilion on the Thames at Barnes, which was built specially to house the pictures in 1733. The portraits were framed for Tonson by the King's framemaker, Gerrard Howard, for two guineas each in a fashionable Palladian style to match the design of the pavilion itself. The Palladian or Kent frame, named after the architect William Kent, features projecting square corners, a flat frieze decorated with sand or an architectural pattern and raised edges carved with an architectural motif.

In the Saloon the pierced carving of the pair of shaped overdoor frames, Stag Hunting in Galtres Forest , show the fine quality of two of the few frames original to the house. On the fireplace wall the three large pictures, all dating to within a few years of 1695, show differing tastes in picture framing: John Closterman's Taylor Family is housed in a superbly carved intricate running pattern, presumably made for the picture. To the right Closterman's 3rd Earl of Shaftesbury and his brother has been reframed in a slightly later frame with projecting carved shell-like centres and corners. Elsewhere in the room a wide range of eighteenth-century framing styles can be seen from the high quality running pattern on Closterman's Unknown Youth , clearly cut down from a larger frame, to the Maratta style found on Pompeo Batoni's Philip Metcalfe . It is also worth examining the carved mirror frames between the windows, where the technique of using white gesso over a wood base as a preparation for gilding can be seen in areas of old damage.  The use of artificial materials, such as papier-mâché and compo, is discussed above under 'Techniques and Materials'. In Lady Chesterfield's Room, the papier-mâché frame on Sir Joshua Reynolds's