This note originated in a guide prepared for the exhibition, 'Painted Ladies: Women at the Court of Charles II', shown at the National Portrait Gallery, London, and the Yale Center for British Art, New Haven, in 2001-2. It has been revised to focus in particular on the Sunderland frame.

The restoration of Charles II as King not only set the scene for the 'Painted Ladies' depicted by Sir Peter Lely and other Court artists but also greatly encouraged the taste for 'gilded frames', a fashion which had been introduced to England by Charles II's father, King Charles I, and other collectors in the 1620s and 1630s. When Charles II returned to London in 1660 at the age of thirty after a dozen years exile in France and Holland he brought with him a cosmopolitan approach. Many of the new frame patterns introduced over the next generation were derived from models in use internationally. They were often inspired by styles developed in France and in particular those introduced at Versailles under the Sun King, Louis XIV, Charles II's cousin. These patterns were brought to England either directly or sometimes via Holland by émigré craftsmen attracted by the opportunities for employment in England, while other styles, including the Sunderland frame, grew out of an established native tradition.

Of the framemakers of the time, certain craftsmen stand out, notably John Smith who framed pictures by Lely, and Henry and John Norris who worked for many significant patrons and artists (Samuel Pepys records visiting their Long Acre workshop in 1669). At the time pine was increasingly replacing oak as the wood used in frame making. Carved and gilded picture frames would have cost from £1 to £3.10s, or more for a full-length, depending on size and elaboration. To set this in context a skilled London carver and gilder might be paid £1 a week while Sir Peter Lely as a leading artist received £20 for Jane Needham, Mrs Myddelton (Althorp), his standard charge for a three-quarter length.

In 1681 Mary Beale, a middle-rank portrait painter with a diverse clientele, was using five different frame styles for her paintings. This wealth of choice was symptomatic of a society with higher expectations than in the past and one in which many more people now had the means to indulge in such inessentials as having their portrait painted. These changes did not pass unnoticed. As John Evelyn expressed it when the King died in 1685, 'Charles II loved planting and building, and brought in a politer way of living which passed to luxury and intolerable expense'.

The taste for richer frames can be illustrated by a remark made by the Scottish artist, John Michael Wright, about the framing of his portrait of Grace Wilbraham, later Countess of Dysart (Trustees of the Weston Park Foundation). Writing to another patron, Sir Walter Bagot in July 1676, Wright mentions that 'Yor frames . . . are richer than the first patterne I shewed you . . . but my Lady Wilbraham comming hither caused her's to bee made broader and richer . . . wch occasioned that I did the like to all yors that they might not bee inferiour to any in that Country'. Sadly the portrait of Grace Wilbraham, Lady Wilbraham's daughter, lacks its original frame, but Wright's letter shows how much the framing of pictures was subject to the dictates of fashion. It also demonstrates how instrumental portrait painters could be in arranging framing for their clients. 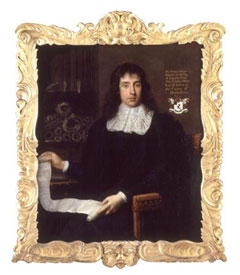 Sunderland frames, fashionable from the 1660s to the 1680s, are a manifestation of the auricular style first seen in picture framing in Charles I's reign. The auricular, literally 'of the ear', relied on fantastic, fleshy, organic ornament; it originated in the Netherlands in the 1610s under Italian influence. Sunderland frames are characterised by their distinctive carving, with a cartouche at top and mask at bottom, and by the way the serrated inner sight edge breaks into the painted area. The pattern takes its name from Robert Spencer, 2nd Earl of Sunderland, many of whose pictures at Althorp are framed in the style, though the term itself is probably a nineteenth-century one. In the seventeenth century most bills simply refer to carved and gilded, or richly carved and gilded frames, although it is clear that at the time artists and craftsmen categorised the pattern as 'gilt leatherwork'.

How did the Sunderland frame (fig. 1) come about? To understand how the taste developed it is worth considering in some detail three exceptional collections: those of the Earl of Clarendon, the Duke and Duchess of York and the Earl of Sunderland. That of Edward Hyde, 1st Earl of Clarendon (1609-74), Charles II's Chancellor, represented in the 'Painted Ladies' exhibition by the single example of Lely's full-length of Clarendon's daughter, Anne Hyde, Duchess of York (Scottish National Portrait Gallery, the frame on the pair to this portrait is repr. in Mitchell and Roberts), which was painted at the time of her marriage in 1660 to James, Duke of York, the future James II. Clarendon's collection was largely formed over the space of a few years from 1660; it extended to include portraits of the famous men and women of his own and preceding ages. His great mansion in Piccadilly, Clarendon House, built between 1664 and 1667, was described by Evelyn in 1668 as 'now bravely furnished, especially with pictures'. But by then the growth of the collection was over since Clarendon had been obliged to leave the country in disgrace in 1667. Many of his portraits have Sunderland or other auricular frames. They would appear to date to the years immediately before his downfall in 1667, rather than to some later framing campaign, say in 1683-5 when Clarendon's son had the collection put in order. If so, the frames are early exemplars of the Sunderland pattern. Lely's Anne Hyde, Duchess of York was one of his first acquisitions and its very special frame, apparently made of oak, with lion mask at top, garland of overlapping leaves running round the frame, weaving in and out of the carved forms, and straight sight edge, owes much to the frames of Charles I's reign and the Commonwealth.

James, Duke of York (1633-1701) and his first wife, Anne Hyde, Duchess of York (1637-71), owned Lely's ten 'Windsor Beauties', of which two were shown in the exhibition, Elizabeth Hamilton, Countess of Gramont and Frances Stuart, later Duchess of Richmond (Royal Collection at Hampton Court). They are thought to have been commissioned by the Duchess. In 1674, soon after her early death, the pictures were hanging in the White Room at Whitehall Palace, which was 'Hunge wth white sarsanett, and over it blew Mohair with silk fringe', though one portrait, that of Elizabeth Hamilton, Countess of Gramont was absent, described as 'gone for fframe'. Though it is not known how they were originally framed, the portrait of the Duchess in her father's collection, described above, may give an idea of the richness of effect that she will surely have wished to achieve. The portraits are now housed in late eighteenth-century patterns.

Robert Spencer, 2nd Earl of Sunderland (1641-1702), Charles II's ambassador to various European courts, was represented in the exhibition by four of Lely's Althorp Beauties (Althorp). Sunderland came of age in 1662 and over the next forty years he added many works to the collection, by inheritance, purchase or commission, in particular portraits by Van Dyck and Lely. Unfortunately his collection is not well documented and there is little information on the frames. What has now emerged is that not only was Lely paid £20 in July 1666 for Mrs Myddelton, he also received £22 in late 1666 or early 1667 'for my Ladyes picture', probably the portrait of Lady Sunderland at Althorp, a further £20 for an unspecified picture in June 1667 and then £43 in October the same year for an unspecified number of pictures, this payment being followed by one for four frames at £14. It is not completely clear whether this frame payment was made to Lely himself but at £3.10s per frame it accords with the standard cost of a three-quarter length picture frame in the Sunderland style.

The Althorp Beauties were painted by Lely over a period of about ten years from the mid-1660s. They have matching Sunderland frames, probably made as the portraits were painted. Their standard size of about 50 x 40 inches means that frames could on occasion have been swapped for practical reasons; for example that on Mrs Myddelton once housed a portrait of Arabella Churchill. That said it is reasonable to conclude that the framing of the portraits today reflects their original appearance. There are small differences between the frames so that, for instance, while Mrs Myddelton is very similar to the general run of Sunderland frames, the other three shown in the exhibition have particularly stylised masks at bottom centre, lacking the usual crowning foliage. All the portraits have frames of oak, though the upper part of the top cartouche on two frames, those of Barbara Villiers, Countess of Castlemaine and Louise de Kéroualle, Duchess of Portsmouth, is made of pine as an integral part of the original construction. The back frames, made of pine as usual, take the form of narrow battens planted onto the rear of the gilt front frames to give sufficient depth to house the picture.

Another collection of great interest, not represented in the exhibition, is the Duke and Duchess of Lauderdale's at Ham House where the Long Gallery is hung with diverse frames in the Sunderland style. The frame maker, John Norris, is known to have supplied picture frames to the Duchess in the 1673 but it is not easy to link the framing bills to individual pictures. In fact, few collections of the period are well documented, making it difficult to trace the origins of the Sunderland style with confidence.

The Sunderland style was not reserved for oil paintings as can be seen by the finely carved pine frame on Edmund Ashfield's small pastel, Mrs Howard, later Countess of Yarmouth (Henry Bedingfield), from Oxburgh Hall in Norfolk, though here the sight edge is straight. This is a frame type found on several of Ashfield's pastels of the late 1660s and 1670s. He was described by one early commentator, Bainbrigg Buckeridge, writing in 1706, as an artist who worked in pastel in imitation of oil, and the pastel's Sunderland frame serves to emphasise further the link with oil painting.

This note has focused on an extraordinary frame style which went out of fashion in the 1680s as other more architectural and more regular patterns came to dominate. While it can be paralleled by auricular frames in Holland and Florence, the Sunderland frame in its ultimate manifestation is uniquely British.

This note should be read in conjunction with the exhibition catalogue, Painted Ladies. Women at the Court of Charles II by Catharine Macleod and Julia Marciari Alexander, 2001, especially nos.1, 15, 17, 22, 30 (repr. with frame), 39, 46, 61 and 80. For further information on framing in seventeenth-century Britain, see Jacob Simon, The Art of the Picture Frame, 1996, from which various material has been drawn including the letter of John Michael Wright quoted above.