'A picture-frame the sides of which cross each other and project some distance at the corners' (Oxford English Dictionary).

The Oxford frame was popular for framing prints and reproductions in the late nineteenth century. It first became common in the 1860s but its introduction remains obscure. The earliest identified reference comes in an advertisement in 1864, offering an oak Oxford frame for an image of the Nativity (Illustrated London News, 14 January 1864, p.62). It would appear that Oxford frames, with their corners crossed in a similar manner to the ‘Oxford’ corners used by printers, took their name from their association with publications of the Oxford Movement [note 1]. An exceptionally heavy and elaborate design, illustrated in Building News in 1866, was described by Christopher Dresser as a ‘fanciful yet good picture-frame’ [note 2]. Charles Eastlake called the type Cruciform [note 3], and in America they were usually known as Rustic frames or Currier & Ives frames (see below).

Frames with crossed projecting corners can be found as long ago as the Romano-Egyptian period, for example on a portrait of a young woman in the British Museum, dating perhaps to AD 50-70 [note 4]. However, it is unlikely that ancient frames of this kind influenced the evolution of the Oxford frame since they did not become known until the late 19th century.

Oxford frames excited mixed reactions. 'The barbarism, called an Oxford frame, is unfit to enclose anything except the scale of fees at the entrance to a “Metropolitan Cemetery”', wrote J.T. Micklethwaite in his book Modern Parish Churches in1874. Three years later Charles Savory in The Practical Carver and Gilder’s Guide (4th ed.) described Oxford frames as having become favourites within the last few years, adding that they are ‘suitable for sacred subjects, mottoes, views in the Holy Land, &c, but are used for portraits, and many other pictures look well in them’. He identifies them as being made of oak and available from wholesale houses in a range of eleven standard sizes from 4 1/4 by 3 1/4 inches to 29 by 21 inches.

Oxford frames ‘of late years have been deservedly in high favour among amateur frame-makers’, wrote James Lukin in 1882 in his book, Picture Frame making for Amateurs. In 1886 Percy Fitzgerald, writing in the Art Journal, claimed that: 'Some years ago there was a frame in high favour, known as the Oxford frame, four light rods, as it were, crossed and fixed to each other with four nails, with rather attenuated and poverty-stricken effect. The eye turned away offended at the "spiky" character of the whole. This, however, is happily disappearing'. But their popularity endured.

Oxford frames became associated with certain sorts of appropriate good taste, as can be seen from two 19th-century reports, both relating to settings where children were brought up or educated. In his survey of orphanages in The Terrible Sights of London (1870), Thomas Archer identifies the articles necessary for the comfort of such communities: ‘Thus we hear that all those illuminated texts, and the bright-coloured prints which in their neat Oxford frames adorn the dormitories and the playrooms, have been presents from the Religious Tract Society, the Christian Knowledge Society, and from our old friend the Illustrated London News’ [note 5]. A more overtly religious context is described in a report by Mary MacKillop on the Catholic convent and school at Hillgrove, Australia, in May 1896: ‘I am particularly pleased with the pictures nearly all of which are poor and framed in plain Oxford frames, the only gilt one being a portrait of the dean which hangs in the reception room’ [note 6].

Oxford frames were often used in domestic settings for framing prints and watercolours, as contemporary reproductions of interiors show. Interesting examples include George Pyne’s watercolours of about 1870 depicting an Oxford undergraduate’s study with a pair of large prints with wide paper margins in Oxford frames, Francis Frith & Co’s photograph of the interior of the Luttrell Arms in Dunster of about 1870 hung with three large images in Oxford frames, an anonymous drawing of 1874 of a well-furnished room prominently featuring a landscape in an Oxford frame, and three Scottish interiors: the staircase of an Edinburgh banker’s house in 1903 and Trumland House and another Orkney drawing room of c.1900 [note 7].

Oxford frames were thought unsuitable for public exhibitions because they took up too much wall space: ‘An Oxford frame may be likened to an octopus, by reason of the eight projections with which it is furnished, and for which room must be found, unless they are at once ruthlessly amputated. Intending exhibitors must, therefore, eschew the Oxford style of frame, or keep them for home use.’ (T.C. Hepworth, Evening Work for Amateur Photographers, 1890, p.79). The photographer, Henry Peach Robinson, roundly condemned the use of Oxford frames for exhibitions, calling them ‘sprawling abominations’ (The studio: and what to do in it, 1885, p.129).

In America such frames were widely advertised as rustic frames: plain (or plain beaded) rustics, carved rustics with carving at the corners (used for Currier & Ives prints, among others) and Sherman rustics with a diagonal moulding at the corners (used for small photographs) [note 8]. They came in standard size ranges, which could run from 2 1/2 by 3 3/4 inches for cartes-de-visite to 20 by 24 inches. 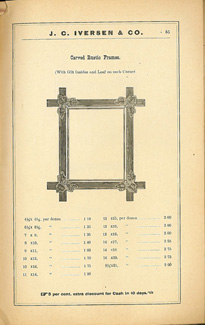 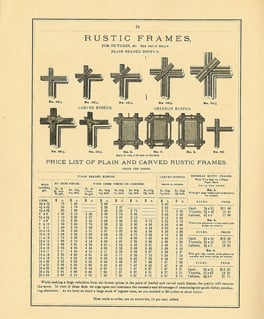 By 1880 makers of Oxford Frames can be found in trade directories for many cities, for example, James Stephen in Aberdeen, William Briggs in Bradford, Jesse Ward in Bristol and James Clarke in Leicester [note 9]. Somewhat later, Louis Rudolph, a carver and gilder, located at 7 Church St, Stoke Newington in 1896, described himself as an Oxford Frame Maker [note 10]. The printseller and picture framemaker, E. Whitnall of 45 South Castle St, Liverpool, featured two Oxford frames on his splendid trade card [note 11].

Oxford frames remained popular in Britain until well into the early 20th century. Paul Hasluck in Mounting and Framing Pictures, 1899 and many subsequent editions, devotes a whole chapter to making Oxford frames, with thirty-five illustrations (see above). They were still in production as late as 1927 when advertised by John W. Calver & Sons Ltd of Lambeth Hill, London EC4 in their trade catalogue as suitable frames for dressing glasses. Most Oxford frames were not labeled by the supplier, as is apparent from a private collection of about 120 such frames, of which only a few can be associated with individual makers, two with a supplier's label (William Boswell in Norwich and Samuel Combes in London), another impressed twice on the reverse (J.H. ATKINS) and another of 1879 (associated with King, Isle of Wight). In this collection, the diverse range of sizes did not appear to support Charles Savory’s claim that such frames were made in standard sizes.

To deepen our understanding of Oxford Frames, it would be helpful to identify good surviving examples that are documented by makers' labels, bills or correspondence.

9. These makers were identified by a search, ‘Oxford frame’, on the websites, Historical Directories, and on the National Library of Scotland’s Scottish Post Office Directories, at http://digital.nls.uk/directories/ .

11. Kindly drawn to my attention by Guy Shaw.