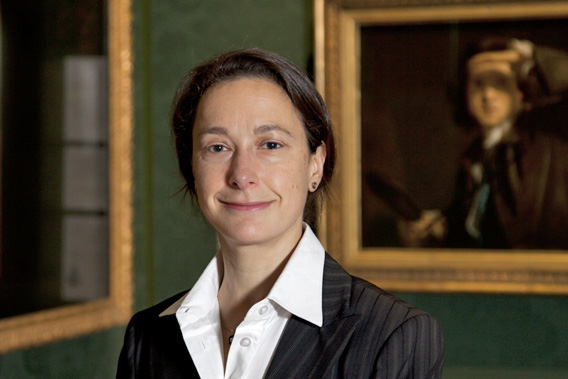 As Head of Collections Displays (Tudor to Regency), working with several Senior Curators and Collections Curators, I oversee the presentation and interpretation of the 16th, 17th, 18th and early 19th century portraits on view in London and at our various regional partners. Since taking my Masters degree, I have specialised in eighteenth-century art and cultural history, so I am particularly delighted to be the Senior Curator of Eighteenth-Century Portraits. In this role I am responsible for the display and interpretation of the Gallery’s collections for the period 1715-1837. This involves managing the Eighteenth-Century and Regency galleries in London. My day-to-day work as a curator includes research and fundraising for new eighteenth-century acquisitions and providing guidance on eighteenth-century portraiture for private individuals, government bodies and other organisations. In 2017, I published Facing the Text: Extra-illustration, Print Culture and Society, c.1769-1840, Huntington Library Press, the first monograph on extra-illustration and portrait print collecting. The research for this book was written up with the support of a 1 Year Leverhulme Senior Research Fellowship. In 2018, the book won in the Historians of British Art Prize for best monograph pre 1840. During my time at the Gallery, I have also worked on a number of eighteenth-century displays and exhibitions and written for their accompanying publications, more recently I have also had responsibility for a number of cross-period displays and exhibitions as well as projects working with contemporary artists and writers, including Ayuba Suleiman Diallo and Ben Okri, A Dialogue Across Time (2013-14); Gainsborough’s Family Album (2017-18), with Professor David Solkin, and the international touring exhibition Love Stories: Art, Passion and Tragedy (2021-22).

I studied History of Art and French at Sussex University, before taking an MA in the History of Art at the Courtauld Institute of Art and completing a PhD at the University of Manchester in 1998.  I worked as an assistant curator and curator at the British Museum  and Museum of London before joining the National Portrait Gallery as Eighteenth Century Curator in 2001. Since then I have been  responsible for refurbishing and redisplaying the Regency galleries (2003) as well as for developing ‘Making Faces – Eighteenth Century Style’ at Beningbrough Hall (2006-18), is a series of interactive galleries which use portraiture, hands-on exhibits and digital material to explore portraiture as a business in the eighteenth century. This innovative installation was short-listed for the Guardian, ‘Kids in Museums’ Award in 2009.  At the National Portrait Gallery, I have also co-curated two major exhibitions, Brilliant Women: 18th Century Bluestockings (2008) and Thomas Lawrence: Regency Power and Brilliance (2010). In pursuing my research into extra-illustration and portrait print collecting, I have been awarded several fellowships, including, a Huntington Library Fellowship (2001) and a Research Fellowship from the Leverhulme Trust (2008-10).  I am also a Trustee of the Wordsworth Trust and was the External Examiner for the M.A. in Museum Studies at the University of Leeds (2012-15). I have been an Honorary Research Fellow in the History of Art Department, Birkbeck, University of London, since 2016.

I am interested in a wide range of areas in the social and cultural history of the eighteenth and early nineteenth centuries. My academic work focuses on gender, sociability, collecting and graphic culture between 1770-1850. I also have an ongoing interest in female portraiture and intellectual life in the eighteenth century, the work of Thomas Lawrence and his contemporaries and the commercial structures of the art world and print markets between 1700-1850. In addition, I am interested in Sir Joseph Banks as a patron of art and a subject of portrayal; I was one of the committee members of an AHRC Funded Network grant project: ‘Joseph Banks and the Re-Making of the Indo-Pacific World’ and chaired a workshop on ‘Science, Self-fashioning and Representation in Joseph Banks’s Circles’ in early 2017; I also co-chaired a symposium on Decolonizing the Art Gallery with Dr Sarah Thomas of Birkbeck in 2019. During the last 10 years, I have co-supervised four CDP students researching subjects as varied as Bluestocking representation and naval portraiture.